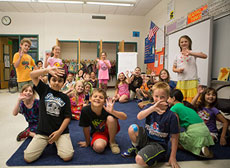 Amid budget discussion for next year and calls from teachers and parents to fund more people in the classrooms instead of continued increases in central administration, the school department proposed the creation of a “summer program coordinator” position at Tuesday’s meeting of the School Committee.

Committee members were not pleased. The recommendation was referred back to Superintendent Jeffrey Young to come up with another plan.

“This is just not the way we should be operating,” said member Kathleen Kelly, who led the charge against this recommendation.

“We need to be looking at more than six months in the future when we’re talking about allocation of money. We need to be thinking about what do we want our summer programming to look like for the next three to five years,” said a visibly irritated Kelly. “Once again, we are reacting to a crisis situation.”

The recommendation was put forth as a way to avoid “losing the Compass program,” as Young put it. The Cambridge/Lesley University Summer Compass program is a six-week, full-day camp for pre-kindergarten through sixth-grade students. Lesley benefits because the program satisfies practicum requirements for students who run the program under supervision from university staff. The program has operated for more than 35 years and serves about 160 Cambridge students each summer.

The school department was told by Lesley mid-fall that it was cutting the administrative position that managed Compass implementation, said Claire Spinner, the school district’s chief operating officer. “Without that support [Lesley] could not continue to run the program,” Spinner said she was told. Lesley rejected CPS’ offer to provide some money to help support that position, she said, saying the university wanted to eliminate it.

Recognizing that “the bigger issue is that we don’t have a fully fleshed-out summer program,” Spinner said, district officials thought that rather than hiring for just the Compass program, they could create a summer program developer position earning $65,000 to $75,000 plus benefits to lead a “well-planned, coordinated academic summer program districtwide.”

“We heard from you and the community that there is a support for summer programming,” Assistant Superintendent Maryann MacDonald said in defense of the recommendation. With applications due to go out in two weeks, she said, “we are now in a position to lose the program.”

Committee members made it clear that each fully supports summer programming in general and the Compass program specifically, but they had issue with the process and hasty creation of a permanent position.

“I have to sit and within three days make a decision,” said Kelly, referring to members learning about the proposal when they got their “books” of meeting materials late Friday. The message to the committee, she said, is “the kids aren’t going to get the summer programs if you don’t support another administrative position in central office.”

“We’re always told [by the administration] that throwing people at a problem doesn’t solve it,” said member Patty Nolan, “and we’re particularly told, don’t do it precipitously without a lot of planning.”

Member Fran Cronin pointed out that last year the city had to scramble last minute to find money to pay some student costs for attending Compass, so funding issues for the program are even broader than the administrative position.

The recommendation was “returned to the superintendent” to explore other possibilities, including members’ suggestions such as reallocating existing staff, including two out-of-school coordinators, or providing stipends to other staff to do the work. Members also wanted to see the issue separated into two pieces: “saving” Compass for the upcoming summer; and a long-term plan for coordinating and assessing summer programming as part of year-round, out-of-school support.

Hands and hearts or eyes and brains

The decision came the same night an upper school teacher reappeared before the committee to ask for more people in the classroom instead of in administration. “This body likes to give the administration money for [its capacity building] almost every time it asks,” Cambridge Street Upper School eighth-grade teacher Lynn Brown said. “When will you build jobs into this district that will really help us … in classrooms?”

Referring to her own plea at a December budget hearing to provide more “hands and hearts” in the classroom, Brown said that perhaps that phrase “may have been too soft a sentiment,” and that what was really needed is “more eyes and brains in buildings working directly with students – aides, interventionists, counselors, et cetera.”

That theme, which “seemed quite powerfully emphasized by educators” at the December hearing, she said, was “conspicuously absent from the budget report and questions regarding it.” The committee clearly heard that the teachers are asking for help, but “I want to say it loud and clear and on camera that the teachers asked for more direct service roles in the schools. And you have not shown us that you heard us.”

Assistant Superintendent Victoria Greer presented her annual report on the Office of Student Services, her second since starting the job in June 2013. Greer and her five “team members” walked through the almost complete overhaul of a department that had long been a source of frustration for parents, teachers and the committee.

Central to the change has been the shift behind the name change from the Office of Special Education. The report summary, preceding a comprehensive report due at the end of the month, provides an overview of a massive restructuring in the past year, the rollout of services and improvement in the implementation of many services, including:

processing evaluations and provisions of support services, including Special Start and Early Intervention for very young children, and the accommodations required by the federal 504 program for children with disabilities. Delays in timely processing have been unaddressed for years.

providing ongoing support for staff and families through all special services-related program implementation, including the participation of 90 percent of students age 14 and older with plans in meetings about their own needs and supports.

launching professional development training and online courses for staff, which have been so well-attended there are waitlists.

The office has been amassing and analyzing data to better understand the needs of students and where future work should be focused. It is also in the “very beginning” of developing a support team model focused primarily on social, emotional and behavioral supports for all students, beginning with the very youngest. Ten percent to 15 percent of students are typically identified as needing additional “Tier 2” supports, and another 5 percent as needing higher-level “Tier 3” supports. Greer said after the meeting that she agreed with recent teacher comments that social, emotional and behavioral issues are increasing – something she said is happening nationwide. She is eager to move forward with this student support model to try to make a difference for the teachers and kids, she said.

“Wow. That was a fantastic presentation,” said Cronin, echoed by other members appreciating that the report was comprehensive and reflected a whole reworking of the department around the key issue of “how to support our students,” and also gave members a better understanding of the “complex” workings of the department at the micro level.

Kelly commended Greer and her staff on long-term planning and emphasis on “building skills” for staff, parents and kids to manage their special needs. “I think that actually is a cultural change,” Kelly said.

“You are at the front of transformative change,” member Richard Harding said. “I’ve been around this system for a while. I haven’t seen change come this fast and this comprehensive.”

In public comments, Cambridge Parent Advisory Council vice-chairwoman Pia Cisternino announced that the CPAC officers have nominated Greer for the 2015 Community Partnership Award at the Federation for Children with Special Needs, noting Greer ushering in “a changed process aimed at replacing an adversarially driven culture with a culture that embodies service, partnership and inclusion.” This signals a big change in parents’ relationship to a department that has been perhaps the biggest target of parental complaints in the city for years.

In public comment, three parents from the Haggerty School asked to expand funds for the Kodaly music program being tested and partially funded by School Improvement Funds there. Parent Wendy McDowell, in presenting a petition from 76 Haggerty parents, argued there were two equity issues: that the benefits of rigorous music education can be provided by wealthier families outside of school, and the inequity that only a few schools had the Kodaly program in any form, including Peabody, Morse, Haggerty, Fletcher Maynard and Tobin.

Parent Emily Dexter spoke in favor of expanding the budget to provide more classroom staffing and world language, which she pointed out is classified as a “core subject” by the state Department of Education. She reminded the committee that City Manager Richard C. Rossi had been willing to provide an additional $4 million annually if teachers had agreed to a longer school day during union negotiations in 2013, and suggested they consider that $4 million still on the table for the school system.

Student committee member Liz Kubicek reported on a Harvard Education School-facilitated dinner between some Cambridge Rindge and Latin high school students and Cambridge police to discuss community racial issues. She said the students had an overwhelmingly positive response to the meeting and found it “enlightening” and “empowering.” At least one follow-up meeting is being scheduled.

Passed unanimously without comment were recommendations to seek funds from the Massachusetts School Building Authority for replacement of the boiler at the Fletcher Maynard School and the roof of the Kennedy-Longfellow/Putnam Avenue Upper School building; to provide $37,000 of out-of-district program services; and to accept $65,000 in grant awards for equipment for Rindge School of Technical Arts students’ research in biotechnology and supporting sixth-grade science students in incorporating technology into project-based learning. Also passed was a record-keeping motion regarding a student supports partner.

Finally, the committee changed the date of a public hearing on the superintendent’s proposed school budget to March 25 from March 24 to accommodate professional development opportunities on the original date.