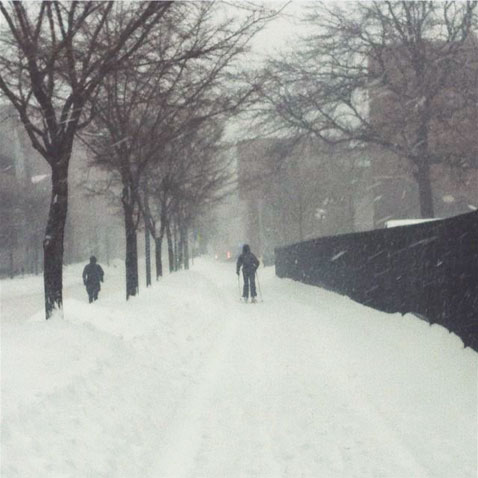 City officials are closing municipal buildings to the public at 2 p.m. today because of an ongoing winter storm, as well as canceling all public meetings and programs – including the City Council meeting, for the second week in a row. Public Schools are already closed.

“Items originally scheduled to be before the City Council tonight will roll into the agenda for the Feb. 9,” said Lee Gianetti, the city’s director of communications and community relations.

When last Monday’s council meeting was canceled by a blizzard and moved to Thursday, it already had a long agenda. After two weeks off for a planning roundtable and the Dr. Martin Luther King Jr. holiday, there were 24 items from the city manager; 27 councillors’ policy orders, and another four that had been put aside by “charter right” use at a previous meeting; and 91 resolutions, which sometimes are discussed by councillors.

At the midnight end of a marathon meeting of some six hours and 15 minutes, the council managed to barely get through the city manager’s items and adopt formally all of the communications and resolutions. All of the council’s own orders for the day were officially tabled, to be joined by another 10 policy orders tonight (although there were only a half-dozen items on the city manager’s agenda).

Now the Feb. 9 meeting will get another set of city manager items and council orders in addition to the roughly 40 that await.

Update on Feb. 2, 2015: Although municipal meetings were set to take place as usual again starting Tuesday and offices would be open, the School Committee canceled its Tuesday regular meeting and an accompanying special meeting and closed-door meeting. Public schools were closed for Tuesday as well.

The city snow emergency parking ban was to end at 7 a.m. Tuesday. Gianetti also noted in an email some other ways the storm would affect programs Tuesday: Department of Human Services Programs preschools, after-schools, youth centers and the King Open Extended day programs would open at 10 a.m. All Community Schools are to be closed. Classes wouldn’t  be held at the Community Learning Center. Senior Centers would be open to serve seniors, but classes are canceled.

The Department of Public Works will clear streets throughout the night, starting with major arteries, Gianetti said, calling for “patience and participation in clearing sidewalks” to at least 36 inches – and ideally 48 – to allow for people in wheelchairs or parents with strollers.

The rules of that participation:

City law requires property owners to remove snow from sidewalks next to their property or business within 12 hours of daytime snowfall and before 1 p.m. when it has fallen overnight. Property owners must also remove or melt all ice within six hours of the time it forms. There is a $50 fine for each day of non-compliance.

Eight to 12 inches of snow were expected, but an official federal winter storm warning was expected to end at 1 a.m. Tuesday, allowing for public school and city business to return to normal.