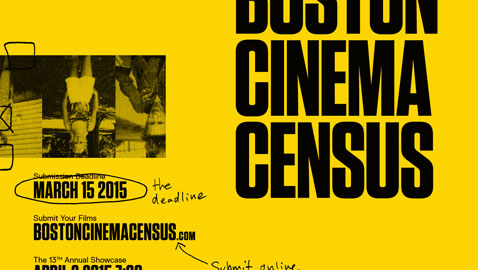 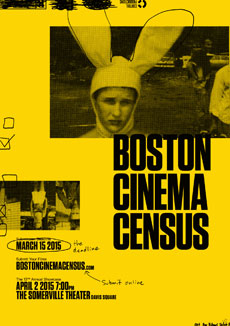 The Boston Cinema Census is calling for short films for its 13th annual event showcasing local independent filmmaking talent – and this year, the event will be held April 2 at the Somerville Theatre in Davis Square, moving from The Brattle Theatre in Harvard Square.

Interest in the event from filmmakers and audiences alike has grown significantly, indicating a strong and robust Boston indie film scene, organizers said, noting last year’s nearly 100 entries and a sold-out show for the second year in a row. Thirteen films – the length of entries is capped at 35 minutes – were screened.

“We want to continue to be the hub of noncommercial film in the Greater Boston area. At the same time, we want to continue to support emerging artistic talent and raise the bar for Boston’s dynamic indie film scene,” said Chris Gaines, chairman of the board of directors for Central Productions, the arts organization responsible for organizing and hosting the Boston Cinema Census.

The films presented each year include narrative, documentary and experimental film, and the event has been a launching pad for New England filmmakers. Past BCC films have gone on to runs at the New York Film Festival, South by Southwest and the Tribeca Film Festival, organizers said.

“Boston Cinema Census is an absolute gem for the Boston film community,” said Cristina Kotz Cornejo, an independent filmmaker and professor at Emerson College. “I’ve had the honor of screening my work twice in the BCC Annual Showcase before sending my work on to the festival circuit.

Her “Buena Fe,” a 16-minute film about a couple whose relationship is falling apart after the death of their young son, was shown last year at The Brattle.

Gaines said Central Productions works to encourage and bolster area filmmakers by creating an atmosphere of community support and providing “an intimate, entertaining way” for New England filmmakers to present their work.

“We’re not about competition. We see so much talent in this region,” Gaines said. “Really, our objective is to provide a supportive platform and an open dialogue within the community – and also to have fun. We pack the house with filmmakers and aficionados; it’s a celebration of talent.”