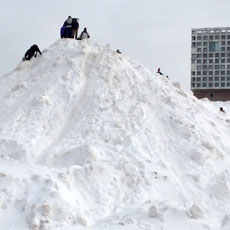 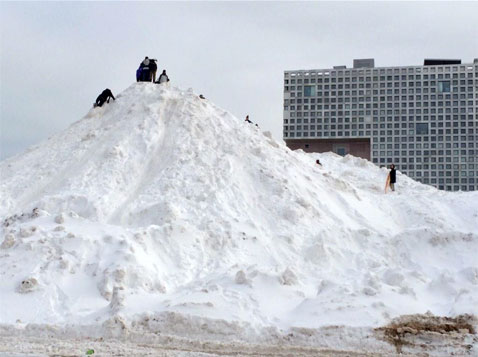 A mountain of snow has grown near the Massachusetts Institute of Technology during the winter’s record blizzards. (Photo: Karim R. Lakhani)

Another 10 to 14 inches of snow are expected this weekend, adding to the 78.5 inches resulting from three major storms in three weeks. The snow has set records and complicated life for city officials and drivers – who face another another Snow Emergency Parking Ban going into effect at 7 tonight – but comes for once at an acceptable time for parents: It’s February Vacation Week through Feb. 20.

A National Weather Service blizzard warning is in effect from 7 tonight to 7 a.m. Monday, and there’s a wind chill warning from 4 p.m. today to 8 a.m. Monday.

The service warns of blizzard conditions, including heavy snow, poor visibility and strong to damaging winds, along with “dangerously low wind-chill values” as low as 28 below. Since a wind chill index of 30 below can cause frostbite in as little as 10 minutes, outdoor exposure should be limited. “Dress in layers and keep your hands and head covered,” the service advised.

More localized forecasts have far less dire warnings of temperatures hitting 3 below on Sunday and 2 below on Monday.

Snow is expected to arrive this afternoon and continue into the evening, pausing briefly before falling again late. The worst conditions are expected late tonight, lasting into early Monday.

All MBTA services will be suspended Sunday, meaning there no subway, trolley, commuter rail, The Ride, bus or ferry service the entire day, officials at the transportation agency said. Valentines Day revelers also will have no late-night bus or subway service tonight, with the last subway trains leaving downtown Boston no later than 12:50 a.m.

More snow may make February Vacation Week a little less fun for families already tired of playing in the snow or bundling up against the cold, and it won’t help to remember that with Tuesday being the school year’s sixth snow day, the last day of school has – so far – been pushed back to June 25.

“State law requires school to be in session for 180 days per year, whenever those 180 days might occur,” schools superintendent Jeffrey Young wrote to parents Tuesday. “CPS’ last day, with no snow days, would have been June 17 … if there are no more cancellations, our last day will be June 25. Thus, we are ‘okay’ for now. Should we have several more snow days, we would need to look at alternatives for adding days back to the calendar so that we can meet the 180-day threshold.”

“Some districts will consider taking away days from the April vacation, holding Saturday school, opening school up until June 30, opening school on Good Friday, etc. We have not made any decisions about this eventuality at this point,” Young said.

Some students are trying to turn the snow to their advantage.

Cambridge Street Upper School eighth-graders planning an overnight, end-of-year trip to New York City in June are hoping to fundraise by offering their services to shovel out cars, sidewalks or stairs. A second part of this challenge would see the kids volunteer to shovel out fire hydrants and volunteer to shovel for the elderly who need help “as part of their giving back to the community,” parent Mark Gardner announced to fellow parents Friday.

About five kids have committed to help so far, and Gardner said they’d received a dozen calls for help in just a day.

“Prices will vary depending on the size of each job, [but] 100 percent of all monies will go toward the NYC trip,” he said. “If you are tired of shoveling and have some cash to help out these kids, or if you know of an elderly person who needs help, please contact me.” Gardner asked that he be contacted by email here. 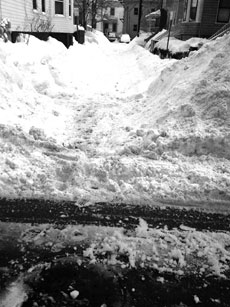 The students could do a brisk business. City plows and Public Works staff have been run ragged just by keeping larger streets clear of the snowfall, leaving residents on smaller streets that were plowed in milder winters to their own devices.

On Ashburton Place, a public street near Central Square, residents awaited plows that never came, with snow piling up and hardening in the chill. Residents in danger of downed lines and needing to clear flat roofs couldn’t get vehicles in or out, and pleas to the city for help were answered only with assurances that the street was “on the list,” one resident said.

Eventually, residents turned to the private sector – a teenager with a powerful snow-blower – and to hoping the city would at least sand.

Snow has also taken some parking spaces out of contention, but at least the repeated snow parking emergencies have made drivers familiar with the woes and limitations of car ownership in winter: Parking on streets marked with “No Parking During Snow Emergency” signs is prohibited during a ban, and cars will be towed.

Drivers can turn to a free off-street parking program for Cambridge residents with city-issued parking permits, which kicks in with the parking ban, letting drivers moved their cars into spots at the Galleria Mall and First Street Garage in East Cambridge; Green Street Garage in Central Square; 52 Oxford Garage near Harvard Square; 65 Waverly St., in the Area II/MIT area by Cambridgeport; and the One Kendall Square Garage.