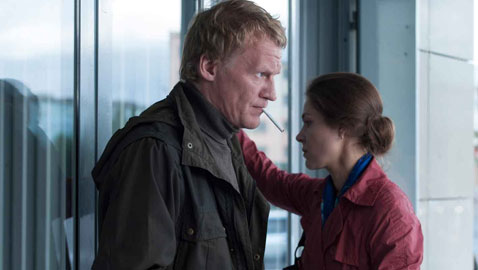 In the Bible, Job suffers endlessly. God lets Satan take his children and his wealth and physically afflicts him with no end in sight. It’s a test of faith and a parable as to why God allows such inequitable ills to wreak havoc on the faithful good. A similar ordeal faces the unfortunate Kolya (Alexey Serebryakov) in director Andrey Zvyagintsev’s “Leviathan.” He becomes the target of the corrupt mayor (Roman Madyanov, brilliantly conjuring up shades of Bob Hoskins in “The Long Good Friday” and current Russian prez Vladimir Putin) in a northwestern Russian province near the Finnish border. The amoral magistrate desires Kolya’s land because of its scenic and strategic locale, between the sea and a broad waterway – and he’s more than willing to bend rules to wrest the holding. 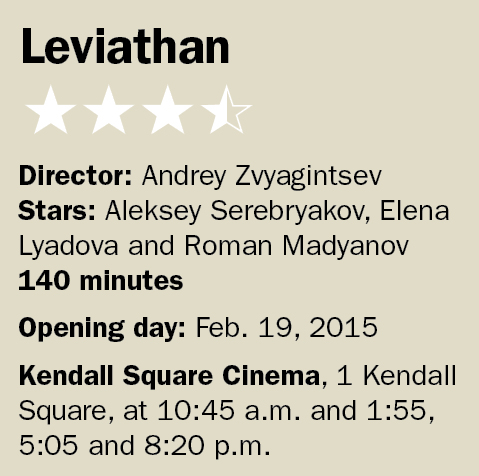 Kolya, both steely and acquiescing, doesn’t seem to have a chance in the annexation process, especially given his best defense is self-contained, vodka-fueled rage – that is, until his handsome army mate from Moscow, Dmitriy (Vladimir Vdovichenkov), now an attorney with a J. Edgar file of dirt on the mayor, drops in. But blessedly, “Leviathan” is not a courtroom drama, nor is Dmitriy the crisp, clean savior he initially appears. The mayor runs a goon squad on the side to do his bidding when the bureaucratic machinery does not move as fast or efficiently as his will would like, and as a result, some near “Goodfellas”-level violence breaks out. But two of the most plot-shaping scenes – a molestation and a murder – take place outside the periphery of the lens, and there is never any real rewind to provide a definitive “what happened.” The weight of it lives on, enigmatically pulling at the viewer’s orientation and sense of morality.

The esteemed book of God also contains the famous story about a leviathan that swallowed an imperiled soul by the name of Jonah, and while the film’s dotted by a series of meta-theological interludes between Kolya and the village’s Orthodox Christian priest and the profound recurring imagery of whales and whale carcasses, Zvyagintsev’s “Leviathan” ultimately takes its nod from the similarly titled Thomas Hobbes book theorizing that an effective and all-inclusive government has to address the needs of its lower social strata fairly or otherwise be in peril of overthrow. The folding in of the Job theme – in which the hand of power on the throttle of torment is not that of the Almighty, but a “fair” and democratically elected stewardship of the municipality that does not abide with the Creator’s embracing benevolence – blends the Biblical and Kafka-esque motifs seamlessly, and provocatively so.

Given the way things have gone for gays and freedom of speech artists such as Pussy Riot in the former Soviet Union, it’s astonishing that Zvyagintsev’s critical and pointed vision found the light of day.

Zvyagintsev – whose 2005 “The Return” painted a portrait of two brothers coming to terms with the father they never knew also set in the remotes of Russia – has rendered something affecting and timeless and free of geographic or theological boundaries. The wide-screen cinematography by Mikhail Krichman that captures the region’s definitive craggy ravines and desolate shores (where the unexpected wash up), as well as Serebryakov’s subdued, but simmering performance, underscore Zvyagintsev’s mission with purpose and poetry. In the end, “Leviathan” feels epic and tiring, but all without a dull blip. It’s something of a rigorous and challenging workout for the soul. In the pantheon of great recent Russian works, Nikita Mikhalkov’s “Burnt by the Sun” makes for a good companion piece in the sense of violent undercurrents, but in texture and exploration of the human condition, the more ethereal and subtly complex “The Sacrifice” by the late, great Andrei Tarkovsky is a more apt specter of the beast.