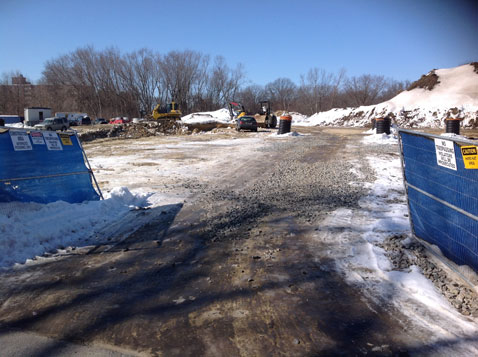 This photo of former Silver Maple Forest in Belmont was taken Friday as the town issued a building permit for a 299-unit apartment complex. (Photo: Mike Connolly)

A building permit has been issued for the Belmont Uplands, allowing construction to begin on a $70 million, 299-unit apartment complex amid the 15-acre wilderness area known as the Silver Maple Forest, but those seeking to preserve Alewife open space continue to fight.

After 15 years of legal battles, a permit was approved Friday by Belmont’s Office of Community Development. “AP Cambridge Partners has fulfilled all requirements under the Zoning Board of Appeals comprehensive permit and the Massachusetts State Building Code necessary to secure a building permit,” said Glenn Clancy, the town’s community development director, quoted in The Belmontonian. AP Cambridge Partners is the corporation building the Belmont Uplands complex.

Ellen Mass, president of the Friends of Alewife Reservation, said a fight to protect the forest goes on, including a complaint brought by the Coalition to Preserve Belmont Uplands in Superior Court; the threat of a lawsuit against the Belmont Zoning Board of Appeals to protect the wetlands and opposing damaging storm-water discharges to Cambridge wetlands; and questions about outdated rain data used in Cambridge and by the state Department of Environmental Protection.

About 2.7 acres of Silver Maple Forest are in Cambridge – but not the area slated for development, minimizing city government’s ability to play a formal role.

Pennsylviania-based O’Neill Properties has long planned to build hundreds of market-rate and subsidized apartments under the state’s Chapter 40B law, which allows developers to bypass local zoning requirements if a community’s housing stock is less than 10 percent affordable.

The project was put on hold by a series of legal actions, in part by the Belmont Conservation Commission and the Coalition to Preserve the Belmont Uplands, after the state Department of Environmental Protection approved the development.

Belmont officials and residents have viewed the project as having a detrimental impact on the school district, with hundreds of additional students entering a system bursting at the seams with higher enrollment, and the project affects East Arlington and Cambridge residents because of their vulnerability to flooding – but also because it takes away pristine wilderness treasured by residents.

“This is a dark day indeed for open-space proponents and for climate-change advocates,” Mass said.

Mass hoped residents would attend the hearing for Daniel Factor of Acton in Middlesex Court, set for 9 a.m. April 13, after his arrest last October while protesting the razing of an estimated 700 trees in the forest; and continue to help preserve the wetlands in the vicinity of the dead forest, which is rich habitat for many birds and mammals. Its soils should not now be contaminated by illegal discharges from storm water pipes into protected wetlands, she said.

A Cambridge vulnerability assessment is expected to be presented from 6 to 8:30 p.m. March 17 in the Kirsch Auditorium in the Massachusetts Institute of Technology’s Building 32-123, also known as the Ray and Maria Stata Center, at 32 Vassar St.

According to a description by John Bolduc, the city’s environmental planner:

A version of this story appeared originally on YourArlington.com. This story was updated March 10, 2015, to correct developer information relating to O’Neill Properties, rather than O’Neill Development.