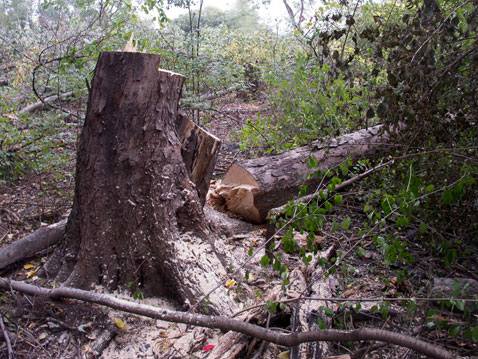 Clearing of trees took place over the weekend in Belmont’s Silver Maple Forest as a judge mulled a restraining order against the work.

A temporary restraining order against tree-clearing in the Silver Maple Forest went into place late Monday morning, after a weekend in which developers went on cutting as a judge mulled the issues, then was reversed Tuesday.

While developers were “enjoined from any further site clearance pending the court’s ruling on a motion for a preliminary injunction” for a day according to the Monday order read by a clerk at the Middlesex Superior Court in Woburn, cutting could begin again Tuesday as of late morning.

“Plaintiffs have failed to show a likelihood 0f success on the merits of this case and a substantial risk of irreparable harm in the II absence 0f an injunction,” Justice Rosalind Miller said Tuesday.

She heard the case Thursday, with 14 Belmont residents as plaintiffs filing against a development corporation called AP Cambridge Partners; David W. Cash, commissioner of the state’s Department of Environmental Protection; and Glenn Clancy, director of Belmont’s Office of Community Development. The residents’s argument for stopping the clearing of land for 299 condominiums was that developers O’Neill Properties and Prudential Financial would be violating local and state stormwater law.

The 15-acre Silver Maple Forest between Route 2 and the Alewife Brook Reservation is in a floodplain, and residents argue the nature must stay intact in part to protect against flooding.

Monday also saw the third protest agains the cutting, and the third round of arrests on trespassing charges — making for 13 people arrested in total charged after going onto the developers’ private property.

Those arrested Monday were Catherine Dreyer Roberts, 75, of Cambridge; Judy Johnson, 69, of Cambridge; Amy Mertl, 37, a Lesley University professor from Somerville; and Daniel Factor, 52, of Acton.

About 50 gathered Monday to protest, according to resident Susan Ringler, making for the largest of the three protests. Protesters chanted, “We are the Lorax. We speak for the trees” – a reference to an environmentally themed book by Dr. Seuss – as workers continued cutting.

“They operated their backhoe almost right on top of us,” Ringler said. “I saw a deer dash across the road toward Cambridge – scared and not knowing where to go.”

The cutting went on until the Miller’s injunction was announced by police, she said.

The forest is due to get a series of condo buildings with around 500 parking spaces called The Residences at Acorn Park. Philadelphia-based O’Neill introduced its $70 million plan in 2005, finding opposition from environmentalists and lovers of the densely wooded forest and its wildlife, including the Friends of the Alewife Reservation, Green Cambridge, the Mystic River Watershed Association, the Belmont Citizens Forum, Lesley University’s Division of Science and Mathematics, the Fresh Pond Resident’s Alliance and the Climate Action Coalition.

Adding 60 affordable housing units to the project puts The Residences under the protection of the state’s Chapter 40B laws – meant to add economic diversity to towns failing to meet a minimum amount of affordability – and complicates opposition.