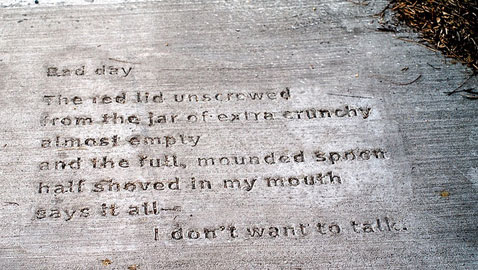 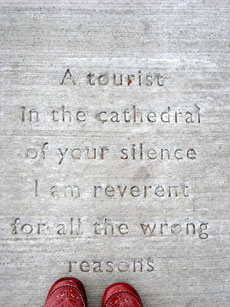 St. Paul, Minn., has stamped 470 poems into sidewalks since 2008, including this one by Esme Evans. (Photo: Jill Kane)

Poets, alert! If you lament your arts’ tendency toward the transitory, Cambridge’s Sidewalk Poetry Program can get your words stamped into freshly poured sidewalk and last for a generation.

Any Cambridge resident of any age is invited to submit up to two short poems online to the 2015 Sidewalk Poetry Contest, so they can be blind-reviewed by a selection committee made up of a former poet populist, a Cambridge high school student and representatives from the sponsoring city agencies: Public Works, the Public Library and Cambridge Arts.

The winners will enliven what would otherwise be routine sidewalk repairs. Now when Public Works pours sidewalk panels, it’s a chance to stamp winners’ poems throughout the city.

The first poem has already been selected for installation this spring. A working group of a resident and staff from Cambridge Arts and the Public Library chose a short poem from “On the River,” a collection of Cantabrigians poems edited by Peter Payack, former poet populist, to go on a sidewalk at the Cambridge Community Center on Callendar Street.

The Cambridge program, in the works since a resident suggested it two years ago, takes St. Paul, Minn., as a model, according to officials at Public Works, Cambridge Arts and Public Library. St. Paul began its sidewalk poem program in 2008, inspired by artist Marcus Young (as artist-in-residence for the Department of Public Works!), and now has 470 poems in city sidewalks. An example closer to home: the poetry stamped into bricks on the platform of the Davis Square T stop.

The details on how to submit poems are here, including the email address to which the poems go. The deadline for submissions is 11:59 p.m. April 12, and winners will be announced April 30.

More details were asked of officials at Public Works and Cambridge Arts, and this post will be updated if they respond.