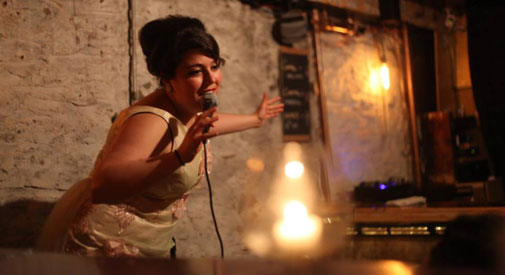 The seventh annual Women in Comedy Festival arrives Wednesday with some wondering at an article that missed women in comedy almost entirely.
By Marc Levy 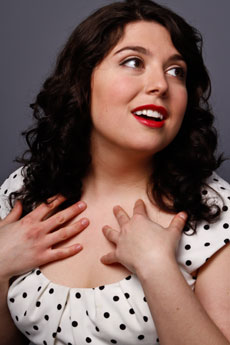 Jenny Zigrino, who appears Saturday at the Women in Comedy Festival, was upset to read a WBUR article about Boston comedy making only a single mention to a single female comic.

The seventh annual Women in Comedy Festival arrives Wednesday, spreading from its longtime base at Central Square’s ImprovBoston to Harvard Square’s Passim and to two locations in Boston – four days with 100-plus comedians, led off by Lily Tomlin and Jane Lynch.

Yet on the eve of the festival, comedian Jenny Zigrino was upset to find an extensive article about the Boston comedy scene that made only a single glancing mention to a single female comic. The article, “‘Too Small To Fail’: Boston Still A Training Ground For Budding Comedians,” by WBUR’s Andrea Shea, talks about the visiting Eugene Mirman Comedy Festival without mentioning the homegrown Women in Comedy Festival.

Zigrino’s complaints about the article sparked an extensive discussion among local comedians online.

“I hope it starts some good conversations,” said Zigrino upon landing in Boston for for her Saturday appearance at the festival, which features workshops and panel discussions as well as comedy shows. “Because I’m tired of this shit.”

She said she was “super surprised” and happy to find that local comics she talked with felt the same way.

But that’s partly because the issues aren’t new. When women in comedy aren’t being ignored, it’s sometimes because they’re facing accusations they aren’t funny. Jerry Lewis said it in 1998 and doubled down in 2013; bomb-throwing essayist Christopher Hitchens wrote “Why Women Aren’t Funny” for Vanity Fair in 2007 and affirmed his position in 2012; talk show host Adam Carolla said the same year that “dudes are funnier than chicks.”

And sometimes it’s worse. Zigrino noted some unburied sexist tweets by Trevor Noah, who is inheriting “The Daily Show” anchor seat from Jon Stewart, and comedian Ari Shaffir’s choice to start his Comedy Central special last month with a critique of the body of comic Damienne Merlina – including the fact she has one arm. Many thought it was bizarre, especially since Merlina is hardly a household name, but in light of the WBUR article Zigrino is still seething. “Maybe he won’t get booked on a few shows, but there’s been no apologies,” she said.

A couple of male comedians were similarly mystified by the approach taken by the WBUR article, noting that the Boston comedy scene is far more balanced than the item suggests. At ImprovBoston’s New Year’s Day “100 First Jokes” event, there were from 60 to 65 women performing among the total 130 to 135 comics, said the show’s producer, Dana Jay Bein, by way of example, and he sometimes teaches courses that are all women.

“The perception [of male-dominated comedy] is incorrect, and I think it’s important that people see that. It’s really bothersome to me as someone who produces comedy locally that people say women are either not funny or not present,” Bein said.

Shea didn’t respond immediately to a request for comment via her Twitter account, and Zigrino said she spent most of her time since finding the article traveling and hasn’t reached out yet.

So she’s not sure why the article went the way it did.

“No disrespect to the author, but I feel like maybe it was a rushed thing. The young comedy students she talked to were male. She included H. Jon Benjamin, and I don’t even consider him so much of a standup,” Zigrino said, referring to the Worcester native she “loves” but is famous mainly as an actor and voice actor in “Archer” and “Bob’s Burgers.”

The article refers to Janeane Garofalo but misses at least two people who seemed ideal for Shea’s thesis of Boston comedy as incubator for people who leave (as Zigrino did) and succeed: Cambridge’s Mindy Kaling and Newton’s Amy Poehler, now better known for the sitcoms “The Mindy Project” and “Parks and Recreation,” as well as books, movies and writing and producing other television shows.

“They’re perfect examples, and they weren’t even mentioned,” Zigrino said.

Don’t expect to see Zigrino address this specific women-in-comedy issue at her Women in Comedy shows, though. While she said she’s been working on material on the broader topic, she wasn’t ready to talk about it and “the show isn’t about me.” Her first priority is enjoying the festival itself, including seeing hometown favorites and friends Bethany Van Delft and Kelly MacFarland and supporting comics such as Sue Costello, a Savin Hill native who had her own Fox sitcom and has appeared in films such as “The Fighter.”

“Our mission is to create a forum for people to experience the comedic expression of women, see strong female performers and, most importantly, to entertain,” festival co-producer Maria Ciampa said. “We want to close the gender gap in comedy,” co-producer Michelle Barbera said in a press release.

The Women in Comedy Festival runs Wednesday through Sunday. A complete schedule and ticket information is here.