Challenge to City Council: Refuse or recuse when it comes to business donors 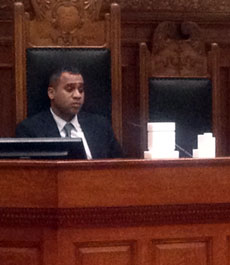 Challenge to City Council: Refuse or recuse when it comes to business donors

There’s a cancer eating away at the integrity of our civic governance. It begins, as it often does, with money.
By Paul Steven Stone

There’s a cancer eating away at the integrity of our civic governance. And it begins, as it often does, with money – money channeled from developers to our city councillors. If the system isn’t rigged in favor of those donors, it certainly appears like it is to anyone who’s been watching the Normandy/Twining assault on the City Council.

Councillors accepting campaign contributions from developers whose projects come before the council is at best a bad idea, at worst a sure sign influence is for sale.

It is far from coincidence that last week’s “attack of the snarling wolves” featured council members who accept developer donations attacking the two members who don’t. Almost surreally, the merits of the proposal by councillors Carlone and Mazen were never actually discussed. Once again, an angry council rejected an opportunity to create something they might have found helpful – a minor zoning change that could have negated Normandy/Twining’s threats to build a lab if they didn’t get their 19-story luxury tower – assuming any wanted a stronger hand in negotiating with the developer.

I’m certain most of our councillors would express outrage at the implication that campaign donations could buy their influence or, worse still, their vote. Well, as a resident of Cambridge, I would like to express my own outrage that councillors whose most important function is to vote on zoning changes would take money from those who appear before them and not recuse themselves.

It is totally possible the $9,450 identified by the state Office of Campaign & Political Finance as being funneled to council members by Normandy/Twining had little to do with the council’s unseemly rush to approve spot zoning for the oversized tower and surrounding properties. Or that the project being put on a fast track had nothing to do with Mayor David Maher getting a total $1,950 from Normandy/Twining interests.

Donations weren’t just handed out once, but fed to the councillors over three years starting Dec. 5, 2012, the day before the council’s Ordinance Committee was scheduled to discuss zoning recommendations for Central Square. From all appearances, our councillors were played mightily by Normandy/Twining, getting fed donations, like hits of an opiate, one after another as the project advanced. They grew more and more comfortable with being in Normandy/Twining’s debt.

Just as surprising as the amounts donated is the manner in which donations were made. Twenty-seven separate donations were made in the two years before Normandy/Twining submitted a zoning petition Nov. 19. Those donations, totaling $6,400, were made to six councillors. Housing Committee chairwoman Simmons got five donations totaling $900 during the four months before the filing of the petition, and Maher got five totaling $1,750 in the month before.

Am I being naïve when I say that the council has an obligation to act in such a way as to enhance its appearance of fair-mindedness and honesty? The councillors’ behavior April 13, attacking their fellow councillors for not acting collegially, was unfair and uncivil. By lashing out at the only council members actually trying to solve planning issue problems, they only highlighted how little they’ve actually been doing themselves.

I’m not accusing anyone of doing anything wrong or illegal in taking their portion of the $9,450 from Normandy/Twining, but I am saying it would be wrong for our councillors to take the money and vote to approve the project.

And when you look at the wrongness of the proposal itself – the building’s precedent-setting height; its massive bulk; its disregard for area zoning and architecture; its inevitable spiking of area rents; its negative impact on neighboring Jill Brown-Rhone Park; its strong neighborhood opposition – you might wonder why the project has council supporters at all.

I challenge all six councillors who have taken substantial donations from Normandy/Twining to recuse themselves from further votes on the matter. This project cannot be debated honestly now; it has been debased by the cynicism that fueled Normandy/Twining’s slow-drip council donations.

And further, I call on all councillors to commit to higher ethical standards in fundraising by either refusing donations from developers and associated business interests or by recusing themselves from voting on matters relating to donor businesses.

Councillors must be above suspicion and the taint of influence peddling, and right now, they’re anything but.

Note from April 23, 2015: Peter A. Ryan, campaign manager for Dennis Carlone’s City Council reelection campaign, says the campaign “did accept the donation without knowing his relationship to the project” and recently “sent a return check for the full amount of $100 back to Mr. Flack to avoid even the appearance of corruption and to maintain the trust of the citizens of Cambridge. That return of contribution will show up in the expenditures section of OCPF in the bank report of the 15 day period that the check was cashed.”