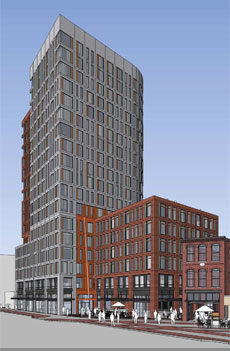 Revisions and analysis come five days before the Planning Board is scheduled to discuss the Central Square proposal.
By John Hawkinson

Changes to proposed zoning for the Mass+Main project would limit the size of upper stories in a residential tower to 10,000 square feet, limiting visible building bulk. (Image: Mass+Main)

Revisions to the proposed Mass+Main development’s zoning, along with a new Cambridge planning department analysis of the project and revisions, were posted just before close of business Thursday on the city’s website. The revision and analysis came five days before the Planning Board is scheduled to discuss the proposal, at 7 p.m. Tuesday.

The zoning proposal from Normandy/Twining that would permit a 195-foot tower overlooking Jill Brown-Rhone Park is before the full City Council after receiving a favorable recommendation from the council’s Ordinance Committee on April 1. Before it can be adopted, the council must first pass the proposal to a second reading, with the final vote at a later meeting. The zoning petition expires May 27, leaving two regularly scheduled meetings where it could be adopted: May 4 and May 18.

In the meantime, councillors Dennis Carlone and Nadeem Mazen had proposed a zoning change that would substantially reduce the office and lab development in Central Square, encouraging Normandy/Twining to continue pursuing a residential project and not consider an office or lab development. That proposal was offered as a policy order at the April 13 council meeting, where it was strongly opposed by business interests and voted down by other councillors without substantive discussion amid claims it was “in no way collegial,” according to vice mayor Dennis Benzan. Carlone was absent from the meeting and Mazen was present by telephone.

Also, at the April 1 ordinance meeting, Carlone had presented an alternate concept for the site, which took his colleagues by surprise and has not yet seen discussion from the council or analysis from city planning staff. It’s not clear if it will.

The committee has not scheduled additional hearings on the petition to discuss the alternatives, amendments or Planning Board recommendations. After the April 1 meeting, several councillors suggested they thought further discussion would happen as part of a regular Monday council meeting.

Though the Planning Board has yet to offer a recommendation to the council, it was critical of the drafting of the Normandy/Twining proposal when it first met to consider it Feb. 24, and it shared many of the concerns that the city’s planning staff outlined in their Jan. 20 analysis memo.

Many of Thursday’s revisions are technical and relate to drafting issues that do not change the end result, but make language more clear.

Among its substantive changes, the revision limits the size of upper stories to 10,000 square feet, which limits visible building bulk. It harmonizes parking requirements with the recommendations from the K2C2 study, specifying between 0.5 and 0.75 parking spaces per unit, compared with a 0.7-space minimum in the previous draft. It adds a requirement for parking spaces for car-sharing services such as Zipcar and incentivizes additional such spaces. As discussed at the April 1 meeting, it doubles affordable-housing units to a minimum of 17 percent affordable, compared with 8.5 percent before; but it reduces the required middle-income units to 3 percent from 8.5 percent.

The revision ensures there will be retail along at least 70 percent of the Massachusetts Avenue frontage, and incentivizes small and local retail by exempting businesses of less than 1,500 square feet from density limitations. It mandates a higher standard of sustainable building design, LEED Gold instead of LEED Silver. It incorporates by reference the Central Square Design Guidelines produced from the K2C2 study. And it affirms that the city’s Article 19 Project Review Special Permit would still be needed for major development to proceed.

The bulk of the city analysis memo is devoted to an overview of the K2C2 zoning recommendations and an analysis of the basic project proposal in that context. The discussion of the recent revisions to the proposal is favorable with respect to most of the changes. The memo was written by Jeff Roberts and Susannah Bigolin. Roberts is the land use and zoning planner for the city, and Bigolin is the city’s urban design specialist.

The planners note that the K2C2 study anticipated 140-foot tall buildings, not 200-foot ones, and therefore additional guidance beyond its Central Square Design Guidelines may be necessary.

“It is therefore recommended that the design guidelines be expanded to address such matters as tower interfaces with neighboring residential buildings, transitions to lower scale historic buildings that are likely to remain, and how tower forms can be configured to maximize sky views and minimize shadow impacts,” the city planners wrote.

This story was updated a few minutes after the initial posting to correct the headline.