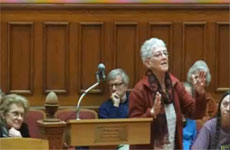 The Mass+Main building proposed for Central Square took a step forward at Monday’s meeting of the City Council, being passed 7-2 to a second reading. The final step for the zoning petition that will allow a 195-foot tower with 232 units overlooking Jill Brown-Rhone Park is a last council vote before its expiration May 27.

Before that vote, likely to be May 18, comes tonight’s meeting of the Planning Board, which might draw some of the same speakers as have been seen at recent meetings on the project’s zoning, called the Normandy Twining petition. At a meeting of the council’s Ordinance Committee held April 1, public comment made up most of a 4.5-hour meeting; on Monday some 40 speakers on the zoning pushed public comment to just under three hours of a nearly six-hour meeting.

“They have to deal with this all in one night,” resident Steve Kaiser said during public comment, referring to the Planning Board. “I’ve been a little critical in the past of the Planning Board, but if ever there was a night they deserved our sympathy and understanding …”

The most affecting public testimony came from Paul Dennis, a single father who described being desperate for more room for his kids just as his spot on the city’s affordable-housing wait list was frozen with thousands of others for Housing Authority construction. He had his eye on one of Mass+Main’s three-bedroom units – or one freed when the building went up, reminding councillors that “30 to 40 [affordable] units is better than zero.” Emiliah Arimah followed him, weeping during the telling of her struggles to avoid homelessness in Cambridge and telling councillors, “This is very real … this is an opportunity to have something sooner rather than later.”

In testimony against Mass+Main, resident Suzanne Schlossberg hit home by describing the four Bishop Allen Drive parking lots surrounding her apartment that are empty on nights and weekends – “completely empty, totally useless to the neighborhood” – and wondering why these Quest properties couldn’t also be used for multiple buildings up to 12 stories rather than a single building of 19 stories. Phyllis Bretholz literally got down on her knees and begged councillors not to accept Mass+Main, calling the step “the last arrow in my quiver” against the 19-story tower.

The two no votes on the proposal – councillors Dennis Carlone and Nadeem Mazen – also asked for more time to work on the proposal before passing it to a second reading, but other councillors felt there had been enough talk. Marc McGovern pointed to the Ordinance Committee hearings and tonight’s Planning Board meeting, saying, “I don’t think this is being jammed through.”

In addition to arguing that the CambridgeSide Galleria mall had been through 26 designs before being accepted, Carlone – an architect and urban planner in addition to city councillor – explained why he still hesitated:

We don’t have enough information. We don’t have a comprehensive housing plan. We don’t have an adopted urban design plan for Central Square. We don’t have economic analysis of the development costs and finances … the Planning Board has not reported … the updated inclusionary zoning nexus study of affordable housing percentages has not happened. This issue is all about land value, and by approving this zoning – which I admit there is movement for – it raises the land value in the surrounding area, which is counterproductive for affordable housing even more so. Where are the studies supporting this dramatic zoning and expansion or upzoning, what has the Community Development Department given us? We have opened the door to [a jump in density] and that will just continue throughout the city, because once the door is open it’s very hard to close without being accused of spot zoning. There’s so many questions … the height is well beyond the C2 proposals, and to me this opens the door for this kind of petition to occur anywhere in the city. I’m very concerned about the impacts.

“Every bone in my body tells me this is bad for Cambridge,” Carlone said immediately before the 7-2 vote.

In other business-related actions, councillor Craig Kelley used his “charter right” to delay action on a Harvard Square sign request by one meeting. Citizens Bank is asking to deploy 519 square feet of banners and signs for itself, Leather World and Bob Slate Stationer in Harvard Square – 3.6 times as much as would normally be allowed – at a uniquely curved building at 30 Brattle St. The council has approval or refusal for 10 banners over the sidewalk, each two feet wide by six feet high.