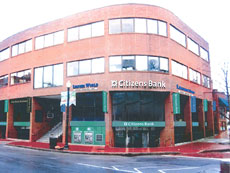 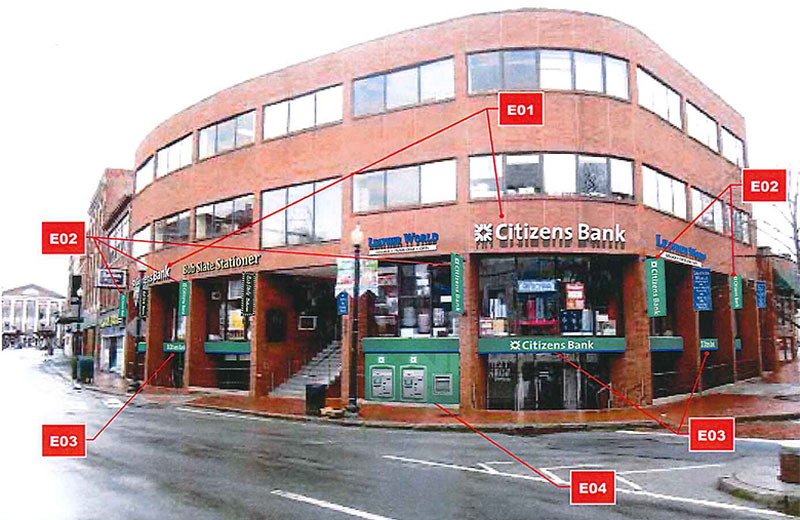 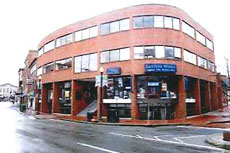 Signs at 30 Brattle St. in their current configuration.

Citizens Bank is asking to deploy 519 square feet of banners and signs for itself, Leather World and Bob Slate Stationer in Harvard Square – 3.6 times as much as would normally be allowed.

On Monday and Thursday, the City Council and the Board of Zoning Appeal will consider related applications for the façade of 30 Brattle St., the old WordsWorth Books store in Harvard Square, with retail on lower and upper levels and a curve along the street that makes it difficult to see a single sign from all street locations.

The zoning ordinance permits only 145 square feet of signage, of which 139 are already being used, but the Board of Zoning Appeals has jurisdiction to approve an increase.

The council has jurisdiction over signs that project into the public way, and Citizens’ roughly $105,000 proposal includes 10 banners over the sidewalk, each two feet wide by six feet high: five for Citizens, three for Leather World, and two for Bob Slate.

Citizens said 167 square feet of the signage would be lit.

The proposal has been before the Cambridge Historical Commission twice, where it was reduced to 519 square feet from 555, a reduction of 6.5 percent. The commission approved it by vote of 4-3 in December as “not incongruous” to the historic aspects of the Harvard Square area – a different standard than those of the zoning board and council, which are less constrained. At the commission hearings, five residents opposed the signs; the Harvard Square Business Association supported them, observing that the lower-level space had been vacant for 10 years and was difficult to lease.

Heather Hoffman, an East Cambridge resident who is organizing opposition to the signage, said she thought the design was inappropriate: “I find the extremely green ATM surround garish, and the entirety of the signs of every type imaginable so excessive as to be noise instead of a useful way to help people find the three establishments in the building.” Hoffman expressed the concern that if this signage were permitted, other businesses would ask for large quantities of signage too.

James Wagner, Citizens’ attorney, said Monday that the bank branch had been open since June after moving from JFK street in the heart of the square, and it has had problems attracting customers to the new location. “A lot of people come off the subway, knowing there is a Citizens there somewhere,” he said, and those people have trouble finding the location, and also may not know its street address.

Wagner told the commission in October that the location needed such signage because of the building shape, and because its address is hard to find in the Square. Wagner said that design came after 23 attempts; the proposed design is the 24th.

In written comments, the Planning Board recommended that the zoning board not approve the sign. “This proposal results in chaotic and inconsistent signage,” the board said. “In particular, the amount of signage and green color allocated to the bank space seems disproportionate.”

The council typically approves sign applications without substantial discussion, unless there is public objection.

Some residents spoke loudly against the sign before the historical commission and marshaled to appear at the Feb. 26 meeting of the zoning board. But the signage was not considered – upon a review of the zoning ordinance, the city’s Inspectional Services Department had concluded that the signs were exempt from most size restrictions because of an obscure provision of the zoning that removes most sign restrictions in the Harvard Square area, Article 20.55.1. The application was repeatedly “continued” to future meetings.

Representatives of the city’s various departments that handle signs met with the city solicitor and re-examined those provisions recently. concluding that, despite their initial stance, the dimensional restrictions on signs actually did apply, and a variance was required. Commissioner of Buildings Ranjit Singanayagam said there was no written determination about this, and he expected the variance would be discussed at the meeting Thursday.

It is difficult for the public to track these issues. While the case has appeared on the board’s continued cases agenda for months, there was no way to determine the city’s new procedural stance without asking explicitly, nor is there any notation in the file about the renewed variance requirement.

In addition to review by the historical commission and zoning board, the Planning Board reviewed the sign application in February as part of its review of pending variance cases with planning implications.

There is substantial confusion about the use of variances, as exceptions to the zoning ordinance are known. In February, the council asked the city manager to review trends in variances and prepare a report. The order was originated by Craig Kelley.

On March 30 the manager returned a 112-page document – photocopies of zoning board agendas marked “Granted” and “Denied” with no analysis of trends, but rather a count of them from 2010 to 2014. “There were a total of 526 variances requested, 423 granted, 41 denied and 62 withdrawn,” the cover letter said.

At the council meeting, Deputy City Manager Lisa Peterson said records before 2013 were not available electronically and would have to be analyzed by hand. But Peterson was wrong: The city’s new computer system imported the variance data from the old system, and it was indeed electronically accessible, along with data for newer variances. Descriptions were available to the public online until about April 11, when the city cut off access.

Martha Flynn, an assistant commissioner at Inspectional Services, said variances were part of a category of permitting that was never intended to be publicly accessible, and that the city turned off access in response to questions from this reporter that referred to their Web addresses. Flynn said the city was working to restore access without also sharing sensitive data, and hoped it could be done within a few weeks.

Flynn said April 16 that a draft report on variance trends had been prepared and presented to the city manager. The city has not responded to requests for the report. 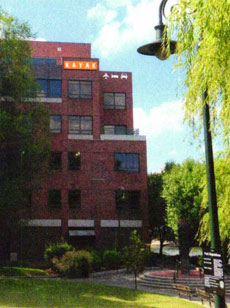 A rendering of proposed signage for travel search company Kayak in East Cambridge. The zoning board approved the orange letter on the left, but not the plane, bed and car icons on the right. (Photo: Kayak)

In the context of another contentious sign variance proposal, for Kayak Software at Canal Park in East Cambridge, Kelley wrote to the zoning board Jan. 20: “I have shared my thoughts with you about such variances in the past, expressing my concerns that the City Council has affirmatively opted not to change our zoning laws regarding signs and it is frustrating to see repeated requests for variances that seek to circumvent our existing zoning laws. I encourage both the Board of Zoning Appeals and the Planning Board to view this, and future, applications with disfavor and, if necessary, provide the council with suggested language to change the zoning to allow signs that, perhaps, the boards feel would be reasonable. The council could then consider those proposals and, if desired, change the zoning and avoid the perceived need for variances.”

Not all members of the Board of Zoning Appeals agreed with this approach. Timothy Hughes, vice-chairman of the board, replied to Kelley in a public letter in the Cambridge Chronicle: “We are a board of volunteers and we spend a great deal of time and care in deciding petitions for sign variances. It is in this light that I find it particularly audacious that city councillor Craig Kelley would suggest that the board spend time rewriting the zoning ordinance concerning signs.” He continued:

The board went on to divide the sign application for Kayak, a travel search company, into two parts and approve one over substantial public objection. The other was denied.

Hughes later said that while he may have been “trying to stir a buzz,” he said that “if [Kelley] wants to hear our feedback he should come to this meeting and see what we do when we do a sign variance … If he wants to know what we think, have him ride his bicycle down here.”