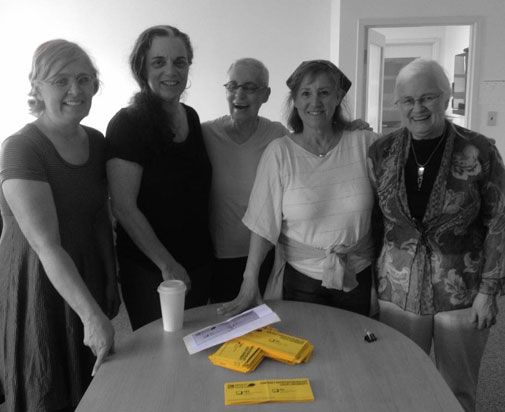 The Lesley Adjunct Faculty Unite group released this image on Facebook, highlighting votes cast for contract ratification with the message “We came. We saw. We counted. Overwhelming majority ratifies contract! Delighted to be a part of a new era of Higher Ed in America.”

The vote caps a yearlong effort by more than 700 educators, who voted to join the SEIU local’s Faculty Forward project in February 2014.

Among the major gains in the three-year Lesley University contract, as explained by Martins in an email:

Most adjunct faculty will get a 33 percent increase in per-course pay over the next three years, with an increase of up to 18 percent for those teaching studio courses.

Adjunct faculty who teach three courses per year over a four-year period will get two-year appointments, along with enhanced benefits, including a contribution to their retirement plan and tuition remission for courses taught at Lesley.

Adjunct faculty will have more voice in decisions affecting educators and students, including formal representation in the University Council and Faculty Assembly.

Lesley adjunct faculty will have access to funding to support research, scholarship, civic engagement and professional and artistic practice that contribute to the learning experience on campus.

In the past, there have been complaints adjunct faculty would “make better money working for Starbucks” than teaching four courses a year at Lesley, “when they can get four.” The testimony to city councillors was by Jason Pramas, who has taught communications at Lesley since 2012 and has been a prominent voice in the unionization efforts.

Adjunct Norah Dooley hailed the agreement as a major victory for faculty and students at Lesley.

“This contract is a start towards turning this university away from corporate values and back to human and academic values that honor the work of all,” said Dooley, a member of the union bargaining committee. “This contract shows a path towards recognizing the truth that teachers and teacher are at the center of learning at Lesley University.”

John Sullivan, director of communications for Lesley University, said the school was “pleased to be concluding these negotiations with our adjunct faculty and look forward to implementing the contract in the coming year. Lesley University values all its faculty members and their commitment to our educational mission.”

Full-time faculty at Lesley University filed for a union election with the National Labor Relations Board in March, although other faculty members have made clear they are undecided about unionization or representation via the SEIU.

In the meantime, the adjuncts’ contract ratification vote marks the latest milestone in a growing faculty union movement, with more than 3,000 Boston-area educators now organized into collective bargaining units that have made gains around compensation and working conditions at Tufts University and Emerson College.

Contract negotiations at Northeastern University are ongoing, with sessions set to begin at Boston University and Bentley in the coming months, Martins said.