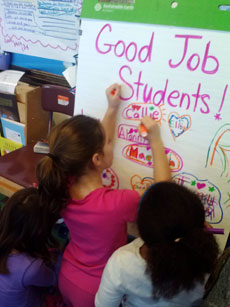 While parents are frustrated about the lack of world language programs in the K-5 grades of Cambridge’s school district, they compete fiercely for spots in its three kindergarten language immersion programs – with the city’s wealthier families winning the most seats, despite district rules about balancing classes socioeconomically.

The “vast majority” of applicants – and students – at the Spanish-English Amigos School and Chinese-immersion program continue to be paid-lunch families, meaning those from higher-income families, said Chief Operating Officer Jim Maloney.

As a result, the enrollment process for the programs is headed for some tinkering – again.

A policy change from 2013 that Maloney would like to reconsider gave enrollment priority to kindergarten applicants who proved they spoke the program language by taking a test through the Family Resource Center, which assigns schools under the guidance of Maloney and district “controlled choice” rules.

His perception is that many families are “paying for private preschools to teach their children a language” so they can have an advantage in the lottery, Maloney said at a May 12 committee roundtable, quoting another local educator as saying these preschools are “teaching to the test, making it more difficult for free- and reduced-lunch families to get in” to the bilingual programs.

Maloney had been skeptical about maintaining a bilingual program at Amigos, the only K-8 school remaining after the Innovation Agenda created middle schools, given attrition problems and the difficulty of transferring students into the school much beyond first grade. But he told the committee he is changing his mind. 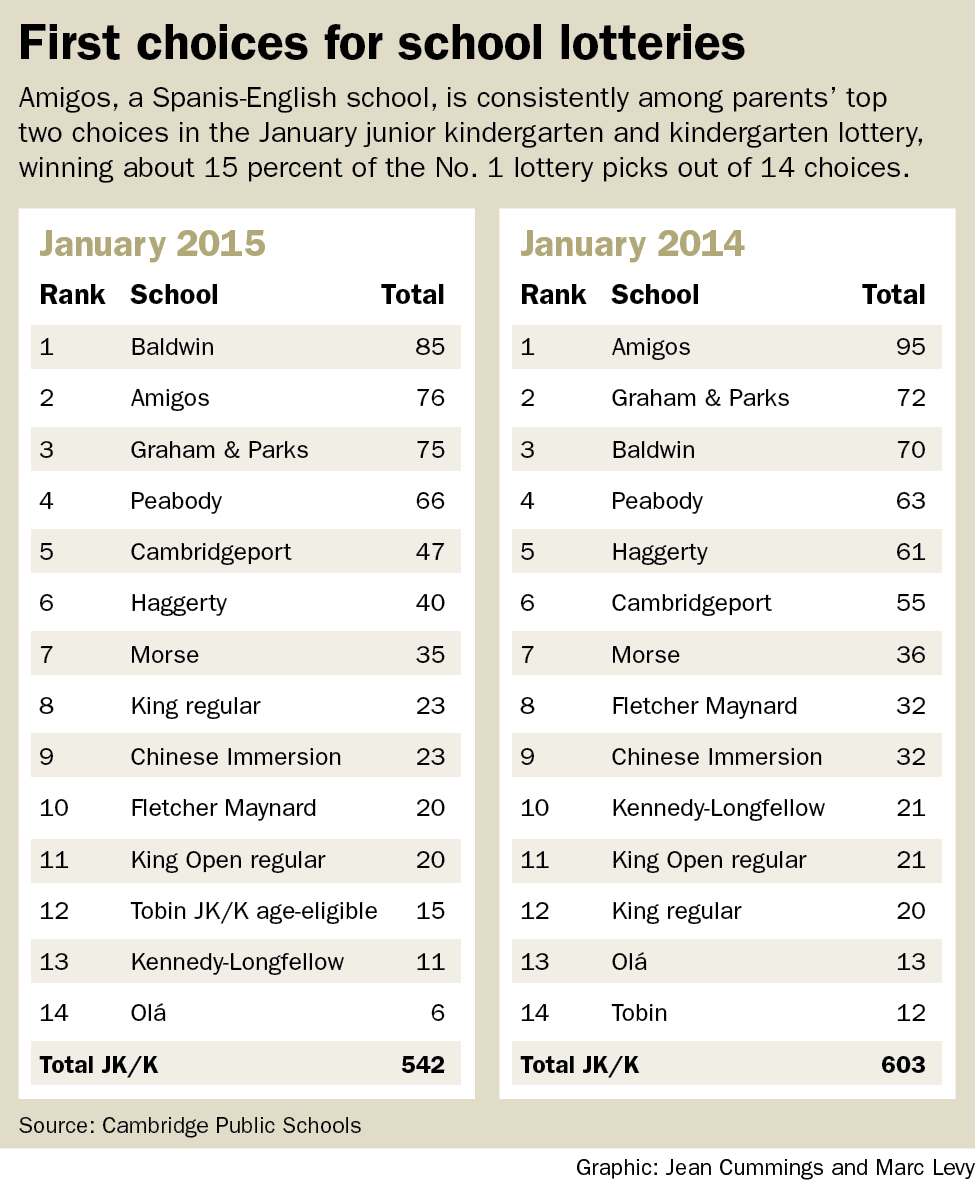 The difficulty of meeting demand while balancing socioeconomic and language-based diversity is also faced at the King Open School’s Olá Portuguese-English and the Martin Luther King School Chinese Immersion programs.

Asked where children who have chosen Amigos but do not get a seat end up going to school, Maloney said “we don’t necessarily know where they go. The vast majority go to a school that is not one of their top three choices.” Some choose the Olá as their second choice, but most become “mandatory assignments,” he said, referring to being assigned a school not among their three choices. In the 2014 lottery for the current school year, there were 95 families who made Amigos their top choice with only 49 seats available, meaning 46 families were likely given mandatory assignments.

Also in 2013, an “internal transfer policy” was created allowing junior kindergarten students in all-English programs at the King and King Open schools to transfer into the Chinese Immersion or Olá programs in kindergarten. (The Chinese Immersion program runs from JK through second grade; after that students may participate in a modified, “partial-immersion” program.) The goal, Maloney said, had been “to increase overall applicants to the King School of paid students” but also to encourage interest in the bilingual programs. The upshot: Just a few immersion kindergarten seats are available – only four for Chinese Immersion in the 2015 lottery.

In three years, Maloney said, only one free-lunch family has used this transfer.

He is proposing to review the issue with the King School and King Open School principals and communities. 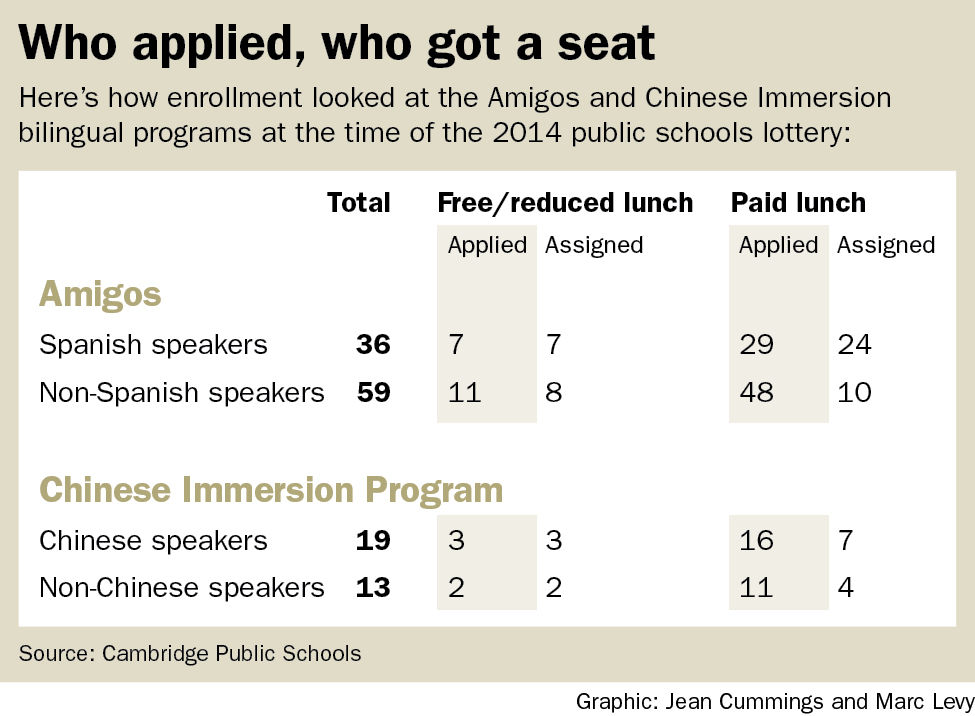 It wasn’t until spring 2012 that Amigos was even included in district rules about socioeconomic balance – because, in the 20-plus years since Amigos started, it had gradually become a school serving mostly English-speaking kids and very few poor kids. (The School Committee’s 4-3 vote to make the change caused a stir not because of the content but because of timing – in the middle of the admissions season, after the January lottery, in a mid-game rules change and immediate shuffling of the school’s wait list.)

“It sounds like we could use another class in the Amigos school,” committee member Fred Fantini said. “But how do we do that with that building?” The Amigos school is tight on space, and its aging building was out of use because of its poor condition before being pressed back into service to accommodate Amigos after the Innovation Agenda restructuring.

Maloney said there were “several solutions for addressing the demand for Spanish immersion programs in the city,” citing the “middle school language program” in the four stand-alone upper schools as one avenue to explore. He did not offer specifics.

Maloney agreed that addressing bilingual program demand should “be added to the list” of upcoming considerations. He also suggested running a separate, earlier lottery for immersion programs, as they do for Montessori, which should decrease resulting mandatory assignments, Maloney pointed out, since if they do not get in via the language lottery they may still enter the regular lottery on the same footing as other families.

The committee at its May 5 meeting agreed to convene a meeting to “develop a short-term and long-term plan … to ensure the growth and success” of Amigos, where presumably these lottery issues will be part of the discussion. It has been scheduled for 4 to 6 tonight in the second-floor Amigos library at 15 Upton St., in the Cambridgeport neighborhood.

Committee member Kathleen Kelly had suggested that the Amigos meeting precede a broader roundtable discussion on the status of the upper schools, scheduled for May 26.