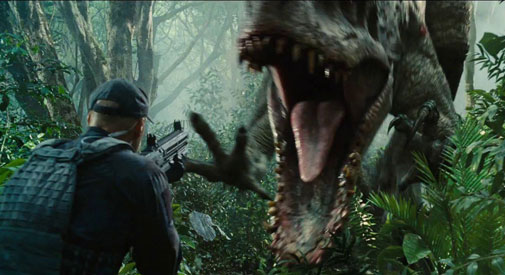 Like the problem of a bigger, meaner and more thrilling (read dangerous) wow that confronts the conglomerate structure behind Jurassic World, the bigger, better amazement park built atop the bones of its humble predecessor from “Jurassic Park,” the filmmakers spinning out “Jurassic World” are saddled with the burden of outdoing what came before – a dino-park movie franchise based on a slim yet innovative novel by Michael Crichton and initially helmed by Steven Spielberg whose last installment was nearly 15 years ago. 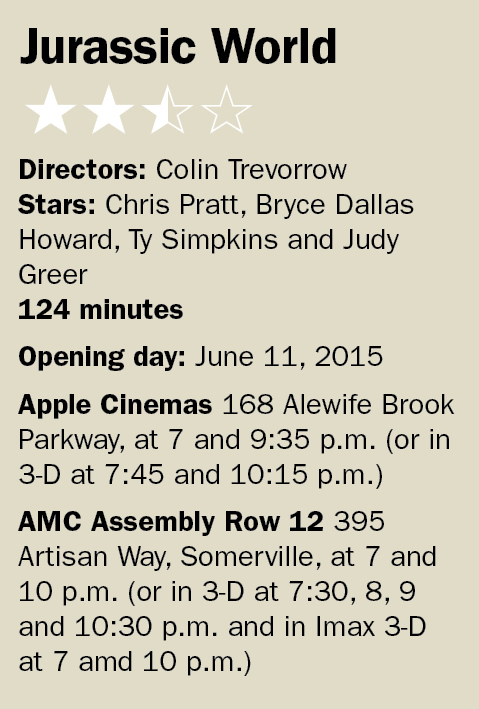 The good news is that the quality of FX has come light years, so people caught in the middle of a dino herd don’t look like they’re being shot against a screen and pasted into a jerkily moving computer rendering; they’re now seamlessly in there with the “real” possibility of being trampled or squashed or snatched up by the genetically engineered Indominus Rex – the new badass on the block, cooked up in a lab by a bunch of avaricious DNA jockeys to provide sizzle and scare the shit out of paying vacationers seeking an adrenaline rush just to know they’re alive.

At the park on a lush tropical island off the coast of Costa Rica, at any time there are some 20,000 people being run through the exhibits and rides and being fleeced for cash with the efficiency of a Disney or SeaWorld.  Money is a driving force at Jurassic World, and in the birthing lab there looms hidden agendas and covert machinations – like whose DNA went into good ol’ Indominus – that breeds malcontent and dubious action.

As to why we’re here, that’s got to do with two brothers Zach (Nick Robinson) and younger sib Gray (Ty Simpkins, “War of the Worlds” and “Little Children”) being handed over to their aunt Claire (Bryce Dallas Howard) for a week while their parents work out the future of their crumbling marriage. It’s not the happiest of times, but since Gray’s obsessed with dinosaurs and Claire pretty much calls the shots at Jurassic World, that seems like a silver lining of sorts. Claire, however, is a workaholic suck-up, and sends the boys off with her assistant (Katie McGrath) while she brings in velociraptor wrangler Owen Grady (Chris Pratt), former Navy special ops and security expert, to see if there are vulnerabilities to the Indominus’ holding pen.

The time to check it was before the raptor-T-rex hybrid grew to be the size of a house. Given these tea leaves – or fossil ferns, if you will – the plot of “Jurassic World” becomes as obvious as the extinction of the great dinosaurs in the fossilized record, though the amount of human lunch meat consumed is rather staggering compared with earlier chapters. The subplot about militarizing raptors for warfare (Vincent D’onofrio is excellent as our sleazy post-9/11 military contractor: “Just imagine if we had these puppies in Tora Bora!”) adds some political punch that unfortunately, like the dig on mining for tourism dollars via manufactured attractions, passes too wispily to bear any bite. Spielberg’s long-standing themes of wonderment, family and youthful innocence get woven in and reinforced by the trusty looping of the John Williams theme song that propelled the original 1993 venture.

All of this – and a $150 million budget – gets entrusted to director Colin Trevorrow and three other screenwriters, who tie back to the original in some smart ways (the old park becomes an archeological find of sorts) but also do a tar-pit sinking job of staging rom-com tension between Owen and Claire. There’s pretty much no chemistry between the two (this crew’s got nothing on the amiable lot from before), but in their flat, straight-ahead roles as corporate wonk and quirky lone wolf, they’re quite effective, especially Howard (daughter of Ron) with her stark auburn bob and luminous eyes underscoring Claire’s vulnerable uppityness. Pratt’s not as disarming as he was in “Guardians of the Galaxy” (Owen’s a shell of Quill) but it’s not going to affect his forward momentum. The nice add to the cast and nod to past comes in Jake Johnson as a Big Gulp-slurping hacker and voice of reason.

Trevorrow, whose other feature credit is the indie sci-fi flick “Safety Not Guaranteed” (budget of just under a mil), stretches himself impressively. He’s given a tall order and nearly succeeds. “Jurassic World” is a popcorn movie, though the butter’s a bit too plastic – the integral visual components don’t always blend together seamlessly. The story stitch-work of past and present feels like a beta release from the lab rather than a summer-ready box-office killer. Crichton’s cautious, forward-looking book had Frankenstein underpinnings: Don’t mess with Mother Nature, or the past. The curators of the park do both, the filmmakers do the latter.