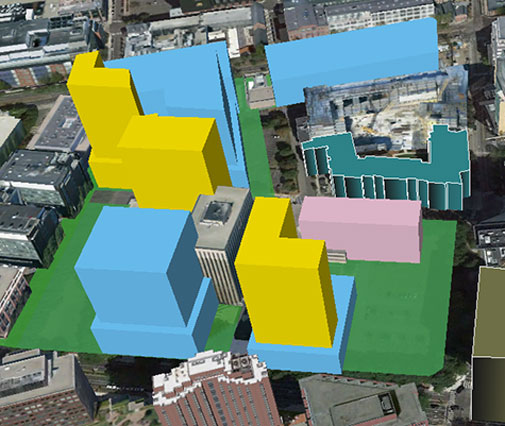 Cambridge architect Tom Stohlman developed 3-D models of possible development scenarios at the John A. Volpe National Transportation Center in Kendall Square. This model is based on images of a city planner model with the tallest buildings being 300 feet; yellow is residential, blue is office and lab and pink is governmental use – the Volpe transportation building. A video tour of the model is below. (Image: Tom Stohlman and John Hawkinson)

The city continues to refuse to release its electronic 3-D models of potential development on the site of the John A. Volpe National Transportation Center in Kendall Square – a 14-acre site in the middle of one of the world’s hottest commercial real estate markets.

Not only that, the city refuses to say why.

It’s expected that city planners may reveal static snapshots of its models before a June 29 joint meeting of the City Council’s Ordinance Committee and the Planning Board, but it is looking unlikely they will release the 3-D models themselves. Access would allow the public to view potential building masses from any perspective, or even bring them into Google Earth and fly around buildings as a bird might.

On Thursday, city planning staff met with councillors Dennis Carlone and Leland Cheung, as well as representatives from the federal government who own the land. Carlone, an architect and urban designer, said he was impressed with the city’s work, and that planners showed him two schemes for potential development – as paper images that showed the potential massing of buildings, but not via computer screen.

But City Manager Richard C. Rossi said Friday that “any images that the members of the City Council have seen are also ones the public has seen.”

Repeated requests were sent to the city for the models throughout April and May, and after the city’s refusal an appeal was filed with the Secretary of State’s Supervisor of Records, a process that typically takes one to three months.

On June 11, formal questions were submitted to the city planning department asking why it insisted on withholding the model: “Why would the city not want as many people as possible to have access to the 3-D model in order to comment effectively on the ongoing zoning discussion and to ensure that the full panoply of public input is considered?” this reporter asked. “What possible harm can there be to the city or its interests in releasing the 3-D model?”

The reply came back Thursday from Assistant City Solicitor Anne Sterman: “As you know, the city has responded to your public records request, and your appeal of that response is pending before the Supervisor of Public Records. As such, the city will await the supervisor’s determination before corresponding any further in regard to this request.” 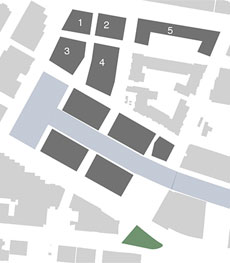 A diagram of how Richard Burck Associates, the ConnectKendall design winners, might lay out the Volpe Parcel, with the Broad Canal extended into the area. Sites 1-4 could be the future home of the Department of Transportation, and the unnumbered buildings would be office, lab or housing, all with ground floor retail.

Three-dimensional computer models “have revolutionized architecture and urban planning. They are far superior to perspective drawings, because any perspective is easily obtained and allow the user to control the view. They are far superior to solid models because they place the observer in the space, not above it,” said Tom Stohlman, a Cambridge residential architect.

Carol O’Hare, a Cambridgeport resident, said, “An electronic, 3-D model is worth even more than 1,000 words. If [city] staff, high-level personnel and Planning Board need models to help them imagine and understand what the proposed Volpe zoning amendment would/could/might permit, why should the public be denied the aid of such models? Why should we have to rely solely on words, often conveying complex, legal, planning and technical zoning concepts like ‘FAR’?” O’Hare wrote to the council with her concerns Monday, referring to floor area ratio.

Planning Board member Steve Cohen said last year that he was “persuaded on the essential crucial value of models.” Cohen said that seeing a building in a model allowed him to evaluate its height in the context of the surrounding buildings.

“I cannot fathom not using 3-D models to inform a zoning decision like the Volpe project,” Stohlman said. “The good news is that [planning] staff has used them to evaluate the Volpe zoning. The bad news is that (apparently) the models will not be used to help inform the boards actually writing the law and voting on it. Even worse, we’ve missed a great opportunity to involve the public and reject the stigma of ‘decide, then announce.’”

Stohlman said he has spent the past week working on his own 3-D models of possible developments on the Volpe parcel and hoped to have them available to the public one week before the June 29 meeting. He offered a video tour of his early models:

City staff first acknowledged the existence of their 3-D models of Volpe at a roundtable meeting of the council April 6. Views from above were shown to the council marked with heights. This reporter requested a copy of the model the following morning, but the city did not reply. 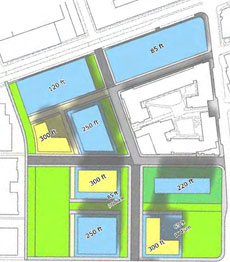 A birds-eye view snapshot from one of four Volpe development scenario models city planners presented to the Planning Board and City Council in April. (Image: Minjee Kim, City of Cambridge)

On April 28, a formal public records request was sent to the city, by law requiring the city to comply within 10 days. Ten days later, the city replied, estimating it would take a half-hour to produce the model and requesting payment of $12.50, which was paid that same day.

One week later, and seven days after the legal deadline, the city returned the money.

“In reviewing the records, we have learned that they contain material exempt from disclosure under [the] deliberative process exemption to the Public Records Law, [which] protects ‘inter-agency or intra-agency memoranda or letters relating to policy positions being developed by the agency,’” wrote Sterman, the city lawyer, on May 15. It was a claim anticipated and called inapplicable in the April 28 request and unremarked upon in the city’s May 8 reply, but now the city was resurrecting it.

“Therefore,” Sterman said, “the city is withholding the records you requested, pursuant to Exemption (d).”

Sterman also highlighted that the zoning amendments had not been “finalized” or submitted to the council.

A public records appeal was filed that same day, May 15. The appeal argued that city’s cited exemption was intended to avoid materials that “could taint the deliberative process,” but in this case, releasing the materials would enhance the public process, not taint a private process; and that “sharing the model files and allowing the public to adjust them, tweak them and transform them can only promote the public process and enrich the public dialogue.”

On May 28, after the finalized zoning was submitted to the council, another request was filed, noting: “the city’s policy position is now fully developed – and so the city may no longer claim the deliberative process exemption”

In an uncharacteristically quick response, Sterman replied May 29 that “unless and until the City Council takes final action on the amendment, the city’s deliberative process remains ongoing.”

On June 1, on the floor of the council meeting, Carlone asked if city planners had a 3-D model.

“There isn’t a 3-D model,” Acting Assistant City Manager for Community Development Iram Farooq said. “What we do have is a few scenarios … we have a few different models that we are happy to share.”

Vice-mayor Dennis Benzan said at the same meeting that “a 3-D model would be very helpful.”

On June 4, Cambridge Day published an article noting the existence of the 3-D model and the city’s refusal to provide it.

On June 8, Sterman wrote to the Supervisor of Records reiterating the city’s claim of the deliberative process exemption.

In an interview on June 10, Farooq declined to explain why she would not make the 3-D model available, but directed formal queries to her through the Law Department. A formal query was sent June 11.

On Thursday, June 18, the Law Department responded with its non-response.

On Friday morning, the city manager said he would discuss the non-response with his staff next week.