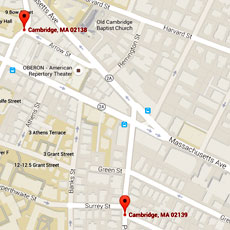 Two men and two juveniles were arrested in Lawrence after a series of armed robberies that took place in Cambridge, Brookline, Boston and Lawrence early Friday. The two Cambridge incidents took place in the Riverside neighborhood, near Harvard Square, and one turned violent.

What police believe to be the final incident in a Friday crime spree was violent as well, and led to the arrest of suspects Michael Ellis, 20, of Haverhill; King Sheman, 19, of Newburyport; and two boys out of Newburyport and Amesbury.

They were arrested by Lawrence police Friday after a victim there said he’d been pistol-whipped and robbed of a phone and wallet. The suspect’s vehicle, a black Volkswagen, and two weapons – a black and silver BB gun – were recovered, and police called in Cambridge, Boston and Brookline detectives to interview the suspects and review recovered evidence that matched the descriptions provided by victims in those cities.

In the first Cambridge incident, two roommates walking to their Putnam Avenue home from Central Square at about 2:30 a.m. saw a dark-colored sedan coming toward them the wrong way on Franklin Street toward Putnam. When the car was close, two men jumped out, pointed a small handgun at the roommates and grabbed their purses and a phone. The men fled in the vehicle, which the victims said was driven by a third person.

About a half-hour later, a student reported to Harvard police – Cambridge Police also responded – that he was robbed at gunpoint while walking down Arrow Street toward Bow Street. The victim also said a dark-colored sedan was involved and described the same team, down to the third man driving the car, according to details provided in an emailed press release by Jeremy Warnick, director of communications for Cambridge police.

In this second case, the car stopped, two men jumped out and hit the student in the face with what he believed to be a handgun, and on the head. The men ordered him to the ground and took his headphones, money and other personal items before driving off. The victim suffered minor injuries, but refused medical treatment.

Anyone with information related to these incidents are asked to contact their local police.