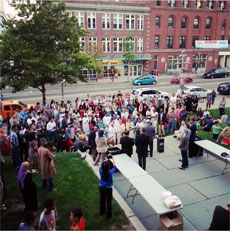 The city’s second annual Ramadan celebration is from 7 to 9 p.m. Wednesday, with city councillor Nadeem Mazen – co-hosting with Mayor David Maher – calling it “an opportunity for the large number of Cambridge Muslims to feel really included in a cultural and civic moment.”

“The entire Cambridge Muslim community seems so overjoyed to share this special month with the community since Mayor Maher and I started this up last year,” Mazen said.

During Ramadan, Muslims abstain from food, drink and other things from dawn to sunset, breaking their fast with a meal called Iftar. As Mazen explained it early Tuesday, on the way back from a 3,000-person, late-night ceremony at Roxbury’s mosque:

The Quran was revealed in the lunar month of Ramadan, and it is during this month that observant Muslims all over the world lay down arms, renew their good intentions, seek forgiveness, remember those less fortunate through fasting, contribute charitably at a high level and consider extra prayers and meditations.

“This is a time of personal reflection and something often shielded from public view,” Mazen said, but “the act of fast-breaking during Ramadan is incredibly dear to Muslims, and something that is meant to be shared with the community.”

The food last year disappeared in less than five minutes, he warned, “so I’d say show up early for the speaking program prior to sunset this year if you want a bite.”

That would mean promptly at 7 p.m., and ideally with an RSVP emailed here.

The event is from 7 to 9 p.m. Wednesday on the steps of City Hall, 795 Massachusetts Ave., Central Square.