‘The Wild Bunch’: Peckinpah goes to war for one night stand at Somerville Theatre 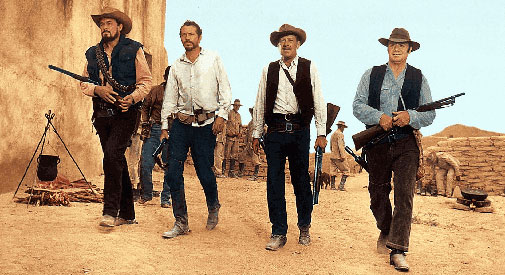 ‘The Wild Bunch’: Peckinpah goes to war for one night stand at Somerville Theatre

Sam Peckinpah’s magnum opus “The Wild Bunch” redefined the Western and the way violence was witnessed onscreen. The morally gray weave sidles up with a gritty band of outlaws (led by William Holden and Ernest Borgnine) caught up in changing times (the advent of the First World War and the invention of the airplane) and a civil conflict south of the border, where freedom fighters inspired by Pancho Villa seek to liberate the oppressed from the tyranny of government strongmen.

The film’s aesthetic rendering of extreme violence paved the way for the works of Coppola and Scorsese in the ’70s and later influenced Quentin Tarantino. It’s easily one of the best westerns ever made, and with the use of multiple cameras at variable speeds shooting the same action, it was a technical game changer. You can see Bloody Sam’s masterwork on 70mm film tonight at 8 p.m. at Somerville Theatre, 55 Davis Square.