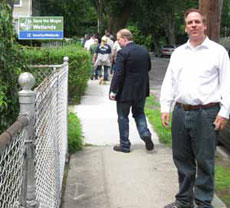 State Rep. Dave Rogers pauses near a “Save the Mugar wetlands” sign on the way to a Mugar site visit in Arlington on June 23. State Rep. Sean Garballey is in the background. (Photo: Bob Sprague)

Cambridge developers planning an unpopular project in the neighboring town of Arlington nearly had a project meeting held without them.

Selectmen in Arlington had set July 22 for a hearing to discuss the next step in an application to develop the 17-acre Mugar site along Route 2 in East Arlington, but after settling last month on the date, Town Counsel Doug Heim said Oaktree Development officials told him no representative from the company could be present that night.

Oaktree said Aug. 5 is good for the company, Heim said – but two selectmen cannot be present that night.

“I feel all members of the board should be present,” selectmen chairman Kevin Greeley said. “It’s important for the board to lead the discussion.”

On Monday, Arlington’s board rescheduled for Aug. 12, but in a lengthy discussion about possible dates, Town Manager Adam Chapdelaine had suggested a fallback position: Keep the July 22 date and hold the hearing without Oaktree.

Gwendolen Noyes, a founder and senior vice president of marketing at Oaktree, said late Wednesday that Heim’s version is not quite correct. Company representatives have been willing to attend any meeting, she said, but because of circumstances beyond their control, “we advised that we wouldn’t have any additional information than what we had in May.”

Arlington officials and its political representatives all are on record opposing the project, with flooding and traffic being the primary concerns. The triangular parcel is north of Route 2, not far from the Alewife Reservation and a floodplain that has been the subject of years of protests during recent development in Cambridge and Belmont. The Oaktree plan would fit its units onto seven acres and leave 10 acres as open space, which retains water and lessens flooding.

Setting a hearing in the matter is one issue; the substance of what may be presented at the hearing is another.

Heim told the board that while selectmen should have full opportunities to ask questions of the developers at a hearing, they may not hear responses reflecting the detail selectmen may want.

Oaktree still must complete reports in a number of areas, including on civil engineering and wetlands, the developer has said, reflecting selectwoman Diane Mahon’s complaint about the June 23 site visit, attended by town and Oaktree officials as well as state Reps. Dave Rogers – who also represents Cambridge – and Sean Garballey and state Sen. Ken Donnelly.

During a tour of the spongy grounds, starting at Thorndike Field and continuing past homeless campsites in the woods near East Arlington homes, Mahon asked a number of questions. The most common response to her queries was that the work has not been completed.

After losing longtime engineering contractors, Oaktree is in the process of bring in a new team, which has slowed the answers sought by Arlington, Noyes said. One of the engineers’ key tasks is resolving the flooding concerns of residents nearby in Cambridge, Arlington and Belmont.

The Mugar project will “not hurt, but improve the hydrology of the area,” Noyes said.

Whatever the opposition, Oaktree plans to build under the state’s so-called Chapter 40b law, which lets developers bypass local zoning regulation if 25 percent of units are set aside for affordable housing, as Noyes said would the case here. Use of 40b helped ensure a permit for the long-stalled Belmont Uplands project in the Silver Maple Forest despite environmental and flooding concerns, and whether it can be used at the Mugar site will be decided soon.

The selectmen’s rescheduling causes a problem: The August meeting is two days after a deadline set for the town by MassHousing, which must decide on Oaktree’s 196-page 40B application. Selectmen have until Aug. 18 to respond to the eligibility application.

The meeting aims to collect information from town leaders and the public as part of the record to address Oaktree’s application.

In a June 22 letter, Gregory P. Watson, manager of comprehensive permit programs for MassHousing, said Arlington has until Aug. 10 to respond to the application. Heim is talking to Watson about extending that, and speaking with Oaktree to work out a hearing schedule and application deadline.

The request by NBM Realty to make the site eligible for a 40B application, with a 196-page proposal, is dated June 8. The site-eligibility application is a necessary precursor to filing a 40B permit application with our local zoning board, Heim said.

MassHousing notified the town June 8 that it had received the site eligibility application and would expect the selectmen’s comment on or before July 8. “That is not sufficient time, especially given the 196-page, detailed application submitted by the developers,” Heim said.

Selectmen are asking for 90 days – until Sept. 6 – to submit a response “to the very broad issue of whether or not the proposed site should be generally eligible for a 40B housing project,” he said.

An expanded version of this story is at YourArlington.com. This post was updated Oct. 28, 2015, to remove a link to a company in Sturbridge that shares a name with developer NBM Realty but claims no connection to the Oaktree project.