Oaktree, seeking to develop in Fresh Pond, gets two-hour meeting about Mugar project 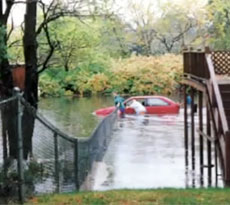 Oaktree, seeking to develop in Fresh Pond, gets two-hour meeting about Mugar project

Forces favoring and opposing development of the 17-acre Mugar site along Route 2 in East Arlington are due for a two-hour meeting Thursday.

Oaktree Development, the Cambridge company planning to build 219 units under a 40B proposal on the land, expects to introduce its team and make a presentation, while representatives of the Coalition to Save the Mugar Wetlands, which opposes the development, have been seeking to energize residents to protest and block the project.

The triangular parcel is north of Route 2, not far from the Alewife Reservation and a floodplain that has been the subject of years of protests during recent development in Cambridge and Belmont. The Oaktree plan would fit its units onto seven acres and leave 10 acres as open space.

“This is not just an East Arlington concern – increased traffic on an already congested Lake Street would overflow onto Massachusetts Avenue and Pleasant Street. The neighborhoods, including the fields at Thorndike and Magnolia, would be further impacted by flooding, which is already an ongoing issue,” the coalition said in an email describing the proposed development as including 200-plus units and 300-plus parking spaces.”

Chapter 40b of state law permits developers to bypass local zoning regulation if 25 percent of units are set aside for affordable housing, as Noyes said would the case here. Use of 40b helped ensure a permit for the long-stalled Belmont Uplands project in the Silver Maple Forest despite environmental and flooding concerns.

Gwendolen Noyes, a founder and senior vice president of marketing at Oaktree, provided what she described as a listening agenda – including “a request for respectful discourse so constructive progress is possible” along with introductions to the Oaktree team, the site and some environmental, hydrological and other values and priorities.

The meeting runs from 7 to 9 p.m. Thursday at the Hardy Elementary School, 52 Lake St., East Arlington.

Next story: Unpopular plan for housing in floodplain might have seen meeting sans developers