Election certifications show 35 are running, including 24 eyeing positions as councillors 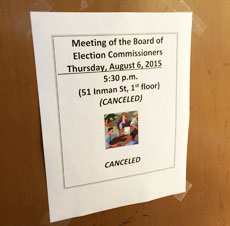 Election certifications show 35 are running, including 24 eyeing positions as councillors

There are 24 candidates for City Council and 11 candidates for School Committee that can run in November elections, as of a Monday meeting of the Election Commission that certified nomination signatures for candidates – the third and final such meeting the commission will hold this election cycle.

The commission canceled as unnecessary a just-in-case meeting set aside for 5:30 p.m. Thursday, for stragglers who turned in signatures at the last minute and couldn’t get certifications by the Monday meeting.

The seven council candidates certified Monday were incumbent Nadeem Mazen; new challengers Mariko Davidson, Ilan S. Levy and John Sanzone; and returning hopefuls Gregg Moree, Minka vanBeuzekom and James M. Williamson. vanBeuzekom was a councillor in the 2012-13 term, and she is running to return after a one-term absence. She was replaced by Mazen in the election two years ago, calling for a recount of tight election results that failed to return her to her seat.

Candidates must have filed no fewer than 50 and no more than 100 certifiable signatures of registered voters in Cambridge. Not every signature is accepted – often because someone who lives outside Cambridge and isn’t eligible to vote signed a candidate’s sheet anyway.

In the 2013 elections, there was one more council candidate; but two fewer candidates for School Committee.

The large number of council candidates made for long and at-times unwieldy public forums. Late in the campaign season, three candidates formed a “Clean Slate” based on a few shared platform items, with two of the candidates winning election: Carlone and Mazen. It was thought to be the first candidate slate since the era of rent control ended in the 1990s, although the huge number of candidates known in decades past – rising to 83 candidates for council in 1941 – made slates of likeminded candidates helpful to voters at the polls.

All nine council incumbents are running for reelection, and five of six committee members – Mervan Osborne opted out after two terms.