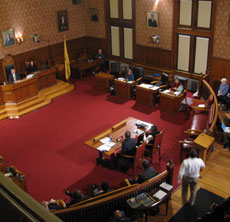 A year after the city started renovations on the City Council’s Sullivan Chamber to improve audio quality, disastrous problems continue to occur. There was no audio for viewers watching Monday’s summer meeting from home on either the Internet or on cable TV.

This reporter set up an ad hoc livestream of the meeting’s audio on Youtube starting at 8 p.m., midway through the five-hour meeting, in response to requests from members of the public on  Twitter. It’s not clear why the city was not able to do something similar or provide an explanation on its live video Web page.

According to technicians working on the problem last night, the problem was an “HD-SDI audio embedder,” a component that adds the audio into the high-definition broadcast stream before the signal is transmitted to 22-CityView, the municipal cable channel. Only after it reaches CityView is the signal streamed on the Internet.

As of early Tuesday afternoon, the city had not posted its recording online, despite telling members of the public it would be posted in the morning. Lee Gianetti, spokesman for the city, did not respond to an inquiry.

At least the audio was working for people present at City Hall. That wasn’t the case last month.

At multiple meetings in mid-July, the audio stream in the council chamber was bad to the point of unusability. Programming in the new system had been altered or tampered with, technicians said, resulting in a one-second delay of audio through some speakers in the room, like an echo chamber. The city had no explanation for how the changes could have been made, and technicians said the system was locked down so no one should have been able to access it. After about a week of reprogramming, the system was functioning again.

Bad from January to May

It turned out the problem was the speakers in the room were mounted upside down, and no one had noticed.

Renovations were originally supposed to have been complete by the fall of 2014. When the audio embedder is replaced, it looks like the system might be fully in place and functioning by fall of 2015, a year later.