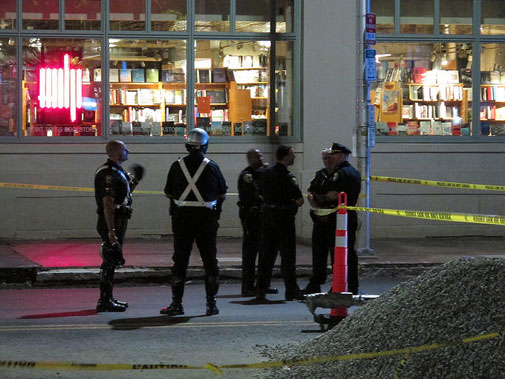 A killer is at large after leaving a shooting victim in a car near the Boston Marriott Cambridge hotel and T stop in Kendall Square, police say.

A report of 10 shots fired came just at 8:41 p.m., later described as five rounds, and within a half-hour police learned the shooting took place at 729 Main St., in the Area IV neighborhood. “One victim was struck in a car,” police tweeted, adding that the victim had been struck by gunshots in a vehicle leaving Newtowne Court. The car containing the victim was driven toward Kendall Square and stopped in front of the Boston Marriott Cambridge, 50 Broadway.

A man was reported by witnesses running up Washington toward Columbia immediately after the shooting. About a half-hour later, a witness at Newtowne Court described a black, two-door car, driven by two men, hitting a curb before speeding away. 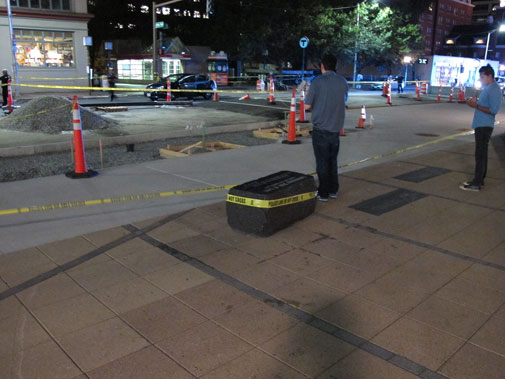 The car believed to be the carrier of a shooting victim remained on Main Street in Kendall Square into early Thursday. Click to see more photos. (Photo: John Hawkinson)

The car holding the victim remained in Kendall Square, said police interviewing witnesses and working the area as an active crime scene. “The driver is cooperating with officers,” according to a joint Middlesex District Attorney’s Office and Cambridge Police press release.

The victim, the passenger in the car, was taken to Massachusetts General Hospital and pronounced deed. The victim’s was identified Thursday by District Attorney Marian Ryan and Police Commissioner Robert Haas as Rasaun Nichols, 31, of Cambridge.

He was reportedly shot five to eight times, including in the head. He was being driven away by an unharmed woman, but they made it only a few blocks down Main Street.

“Unsuccessful attempts were made to save Mr. Nichols,” the officials said in a press release.

Students at the nearby Massachusetts Institute of Technology were warned Wednesday by the school’s emergency network that the area “will remain a crime scene for the foreseeable future” and to stay clear, although police at the scene were letting T riders go down to catch trains, so long as they accessed the station via the sidewalk, away from the investigation. Shortly after midnight, police called for a tow truck to clear the car that had carried the shooting victim.

The suspect is still at large, students were warned.

More photos of the scene are here.

This story was updated and corrected frequently after the initial posting as information was released and details became more clear.