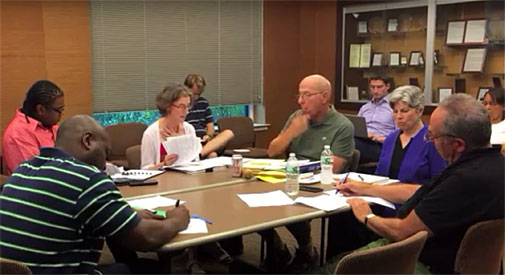 In this still from a YouTube video of his performance evaluation, Superintendent Jeffrey Young is at right, with his back to the camera.

Tension was noticeable at a meeting evaluating the performance of schools Superintendent Jeffrey Young, and questions remain regarding whether correct procedure was followed. The required yearly evaluation, which was skipped last year for unknown reasons, took place at a special Aug. 18 meeting of the School Committee. Young’s contract is up at the end of the upcoming school year, in June. He came to the district in 2009.

Public notice of the meeting does not appear to have been published in the newspaper, and the meeting was held offsite in the community room at police headquarters instead of in its dedicated meeting space, which has high-tech recording equipment. The committee did not record the meeting, in conflict with typical practices, but a video of the meeting is available here. Only a handful of members of the public were present.

A recent article by Jean Cummings indicated that the committee has a “long tradition” of holding these meetings offsite in an effort to keep them out of the public eye; committee vice chairman Fred Fantini was quoted as saying he expects that this will likely change in the future due to new open-meeting laws. This is confusing, since those new laws are already in effect, so if they would require such a change, it would have been required for this meeting.

Fantini read excerpts from a “composite” evaluation he created from individual evaluations submitted to him by each committee member. Fantini used the “model educator evaluation system,” the same system used to evaluate teachers. The factors considered were: progress made toward goals; performance on four standards; and the impact on student learning. Fantini declared Young to be “proficient” on the first two standards and “moderate” on the third.

There was disagreement among members regarding the procedure for Young’s evaluation, which appears to have differed substantially from the past. Member Patricia Nolan challenged the composite report approach, calling it at odds with her understanding of what the process should be. She also did not feel that Fantini’s report adequately reflected her evaluation.

Nolan encouraged members to present their individual evaluations at the meeting to be more “transparent” to the public, but Fantini disagreed, encouraging Young to stay focused on the composite. Young agreed with Fantini, claiming it would be “difficult” to respond to seven individual evaluations – even though that was the process in the past. Young offered to have private discussions with members at a later date, which seems to defeat the purpose of a public meeting.

A letter from the Attorney General’s Office was discussed that recommended a composite report should be created by an administrative assistant, rather than a member of the body. This point was also disregarded by Fantini.

Concerns raised were not limited to the composite report. Despite the discouragement from Fantini, Nolan proceeded to present some of her comments from her individual evaluation. Under the section for “ethical behavior” she said it was “very troubling” that Young was non-responsive and misled the committee about how the plagiarism charge against a top administrator was handled. Young had claimed the matter had been reviewed, when it had not – a cited ethics expert didn’t even have the documents necessary to perform the review. Nolan thought this was not good for the district, and that there should be “very strong standards set and actions taken.” She also expressed concern with Young’s lack of responsiveness and transparency in failing to offer the committee data on whether goals were met.

There was much discussion about the relationships between the administration, school staff and committee members, with a consensus everyone should work better together. Nolan indicated there was a “lack of equity and professionalism” from the administration toward some committee members and school staff. Member Kathleen Kelly agreed, indicating that the two key issues for her are “inclusion” and “equity.” She added that more real information should be shared, and there should be more dialogue with district leadership. Member Richard Harding agreed the relationship was strained, and expressed concern over friction he saw between Young and new members of the committee, saying they felt Young didn’t “have their back.”

Despite what appeared to have been legitimate and unresolved concerns over the procedure, the composite report was adopted unanimously by the committee.

Kim Courtney is a lawyer and candidate for City Council.