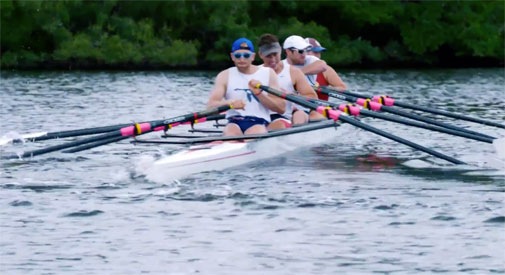 Red Bull has posted a highlights video from its High Stakes rowing competition, held Aug. 22 in the Charles River along Magazine Beach in Cambridgeport.

The energy drink company has made itself a player in the world of extreme sports, hosting events and even putting out a magazine with accompanying online media. The edgy factor in this 14-team, head-to-head rowing relay race? The athletes had to do a 180-degree turn halfway through the course, and didn’t know until just before the event whether the turn went to the left or right.

That was a first at a regatta in North America, according to Red Bull.

“The stake turn was very challenging, but three times around the course you start to figure it out,” rower Stesha Carlé told writer Scott Hart.

The Cambridge Boathouse team took a “High Stakes” award, but otherwise locals were locked out of the winning slots as the teams went through eight-person, then four-person, double and single-rower versions of the race. First place went to the SoCal Scullers, of Huntington Beach, Calif. (and Carlé’s team), and second place went to Team Potomac, visiting from Washington, D.C. The event drew some 200 competitors from around the country.

In addition to capturing some gorgeous scenery, the 3.5-minute video explains the sport’s importance to its participants and gives some history of rowing on the Charles, home to that other big annual rowing event – the Head of the Charles Regatta, coming Oct. 17-18.

“This river is one of the meccas of rowing,” said Mike Farry, president of the Riverside Boat Club.