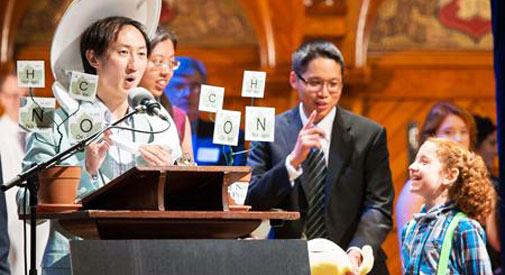 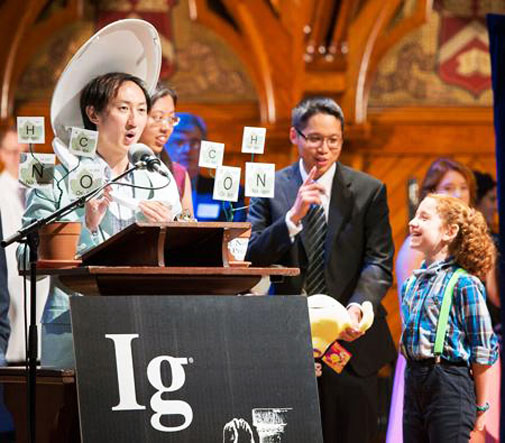 The 25th annual Ig Noble Prize ceremonies hit the notes followers have come to expect over years of honoring true but funny scientific achievements, including showing off some legitimately intriguing findings.

Intense kissing and sex can have a medical effect, possibly even reducing allergic reactions. The word “huh?” (or its equivalent) seems to exist in every human language. And it turns out that many risk-taking business leaders have something in common: a childhood experience with natural disasters such as earthquakes and wildfires, so long as they didn’t have dire personal consequences.

Meanwhile, the air was thick with paper airplanes; there was a Win-a-Date-With-a-Nobel-Laureate Contest with some of attending winners of actual Nobel prizes (who awarded the Ig Nobel statuettes); and another premiere of an original, science-themed opera with legit opera singers – “The Best Life,” about the competition among millions of species of life, sung by soprano Maria Ferrante, baritone Scott Taylor and chemist Daniel Rosenberg (with an All-Species Chorus made up of area researchers and the Nobel laureates).

There were also the moments that could happen only at this ceremony, which took place before 1,100 spectators Thursday at Harvard University’s Sanders Theatre: Japanese politician, author and inventor Yoshiro Nakamats, who holds more than 3,000 patents and won a 2005 Ig Nobel for taking pictures of every meal he’d eaten in the past 34 years, sang, with the audience, a song written by himself about his recent diagnosis with a fatal form of cancer. (The theme of this year’s awards: “Life.”) And the enforcer of winners’ 60-second limit for acceptance speeches, the “cute but implacable” 8-year-old “Miss Sweetie Poo,” was joined by many of the Miss Sweetie Poos from previous ceremonies.

Most of the new winners journeyed to Harvard at their own expense to accept their prizes, and there was the usual flurry of coverage by news organizations from around the world, because most nations take science – even funny science – more seriously than America. (Some new and past winners will take part in the European Ig Nobel Show on Oct. 3 in Amsterdam, The Netherlands, at the Nemo Science Center.)

After getting each winning team their cash prize (a 10 trillion-dollar bill from Zimbabwe), master of ceremonies Marc Abrahams closed the ceremony with his own traditional wish: “If you didn’t win an Ig Nobel Prize tonight – and especially if you did – better luck next year.”

Physics: Honored for testing the biological principle that nearly all mammals empty their bladders in about 21 seconds (plus or minus 13 seconds) were Patricia Yang and David Hu of the United States and Taiwan and Americans Jonathan Pham and Jerome Choo. (See “Duration of Urination Does Not Change With Body Size.”) All attended.

Management: Honored for Gennaro Bernile of the United States, Italy and Singapore, Vineet Bhagwat of the United States and P. Raghavendra Rau of the U.K., India, France, Luxembourg, Germany and Japan for discovering that many business leaders developed in childhood a fondness for risk-taking when they experienced natural disasters such as earthquakes, volcanic eruptions, tsunamis, and wildfires that – for them – had no dire personal consequences. (See “What Doesn’t Kill You Will Only Make You More Risk-Loving: Early-Life Disasters and CEO Behavior.”) Bernile and Rau attended.

Economics: Honored for The Bangkok Metropolitan Police in Thailand won for offering to pay policemen extra cash if they refused to take bribes.

Medicine: Honored for experiments to study the biomedical benefits or biomedical consequences of intense kissing and other intimate, interpersonal activities were two groups: Hajime Kimata of Japan and China; and to Jaroslava Durdiaková of the United States, Slovakia and the U.K., Peter Celec of Slovakia and Germany and Slovakians Natália Kamodyová, Tatiana Sedláčková, Gabriela Repiská, Barbara Sviežená and Gabriel Minárik. (See “Kissing Reduces Allergic Skin Wheal Responses and Plasma Neurotrophin Levels,” “Reduction of Allergic Skin Weal Responses by Sexual Intercourse in Allergic Patients,” “Kissing Selectively Decreases Allergen-Specific IgE Production in Atopic Patients” and “Prevalence and Persistence of Male DNA Identified in Mixed Saliva Samples After Intense Kissing.”) Durdiaková and Celec attended, while Kimata was to be at the follow-up Ig Informal Lectures.

Mathematics: Honored for trying to use mathematical techniques to determine whether and how Moulay Ismael the Bloodthirsty, the Sharifian emperor of Morocco, managed, during the years from 1697 through 1727, to father 888 children were Elisabeth Oberzaucher of Austria, Germany and the U.K. and Karl Grammer of Austria and Germany. (See “The Case of Moulay Ismael: Fact or Fancy?”) Oberzaucher attended.

Biology: Honored for observing that when you attach a weighted stick to the rear end of a chicken, the chicken walks similarly to how dinosaurs are thought to have walked were Chileans Bruno Grossi, Omar Larach, Mauricio Canals and Rodrigo A. Vásquez and José Iriarte-Díaz of Chile and the United States. (See “Walking Like Dinosaurs: Chickens with Artificial Tails Provide Clues about Non-Avian Theropod Locomotion.”) Grossi, Iriarte-Díaz, Larach and Vásquez attended.

Diagnostic medicine: Honored for determining that acute appendicitis can be accurately diagnosed by the amount of pain evident when the patient is driven over speed bumps were Diallah Karim of Canada and the U.K., Anthony Harnden of the United States, U.K. and New Zealand, Nigel D’Souza of the United States, U.K., Bahrain, Belgium, Dubai, India and South Africa, Andrew Huang of China and the U.K., Abdel Kader Allouni of Syria and the U.K., Helen Ashdown of the U.K., Richard J. Stevens of the U.K. and Simon Kreckler of the U.K. (See “Pain Over Speed Bumps in Diagnosis of Acute Appendicitis: Diagnostic Accuracy Study.”) Karim, Harnden, Ashdown, D’Souza and Kader Allouni attended.

Physiology and entomology prize: Honored for painstakingly creating the Schmidt Sting Pain Index, which rates the relative pain people feel when stung by various insects, was Justin Schmidt of the United States and Canada; for carefully arranging for honey bees to sting him repeatedly on 25 locations on his body to learn which are the least painful (the skull, middle toe tip and upper arm) and which are the most painful (the nostril, upper lip and penis shaft), Michael L. Smith of the United States, U.K. and the Netherlands was honored. (See “Hemolytic Activities of Stinging Insect Venoms” and “Honey Bee Sting Pain Index by Body Location.”) Schmidt and Smith attended.