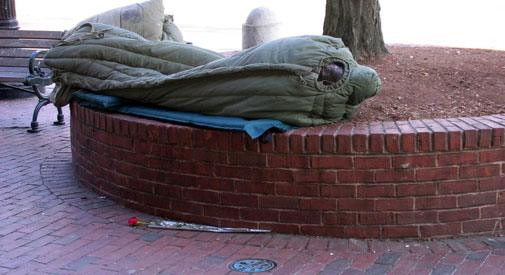 The Mayor’s Commission on Income Insecurity reports on its work.
By Marc McGovern

In October, at the request of city councillor Marc McGovern, Mayor David Maher formed the Mayor’s Commission on Income Insecurity. Below is a composite of the introduction and introduction letter written by McGovern for the income insecurity report.

When people think of Cambridge, they tend to think of its world-class universities and leading biotech companies. What they don’t think about is how many people in our community are truly struggling – to pay their rent and bills and to put food on the table. Last year, the city’s Community Development Department issued a startling report on poverty rates in the city showing that despite the wealth and innovation in our city, 11 percent of residents (or approximately 8,000 people) were below the federal poverty line. In communities of color, these numbers were even higher: 30 percent for our black residents and 20 percent for our Hispanic residents. The federal guidelines for poverty don’t come close to what it costs to live in our city, which raises the question, “What does it really cost to live in Cambridge?” It was at that point that the Mayor’s Commission on Income Insecurity was formed.

The commission, chaired by myself and councillor E. Denise Simmons and made up of city staff, nonprofit leaders and community members, met 10 times over several months to grapple with how income insecurity affects our residents, what the city is doing to support those in need and what gaps exist in city and nonprofit services that should be addressed. The commission identified several areas that were 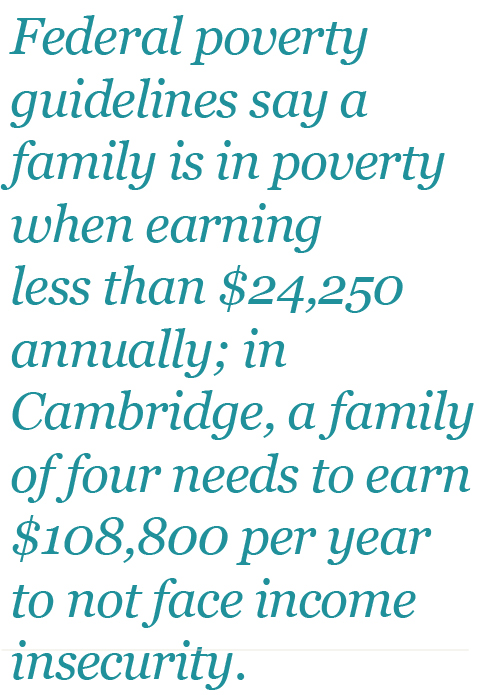 most critical: housing; hunger; wages and employment; and job training and education. Members formed subcommittees to research several questions: What is the impact of being income insecure in these areas, what city services are available, what city services are missing and what recommendations should be made to address these areas in regard to each topic? We compiled city demographics on what it takes for people to live in Cambridge service free and broke those numbers down by subgroups to give a more accurate picture of how many in our community are truly struggling. In addition, we conducted focus groups at senior housing and public housing developments, as well as an online survey that yielded just under 400 responses.

This commission uses the term “income insecurity” as opposed to “poverty,” defining income security as the amount of money it takes for a person or people to meet basic needs without government help. The choice of terms is important. Many municipal, state, and federal programs use the federal definition of poverty to determine who qualifies for support services, but those numbers do not adequately address the situation in Cambridge. There are many who earn more than the poverty guidelines but still struggle to pay bills and may be in need of help.

As startling as the results of the city’s poverty study are, the results of the commission’s work are even more so. It found that the gap between those who can meet their needs and those who struggle is even wider than members thought. Federal poverty guidelines say a family is in poverty when earning less than $24,250 annually; in Cambridge, a family of four needs to earn $108,800 per year to not face income insecurity.

For Cambridge to be the socially just community we want it to be, we need to address this gap with more urgency.

While the commission has made numerous recommendations in its report, the overarching recommendation is that we, as a city and as city leaders, need to make addressing income insecurity a goal by providing the proper resources and attention it deserves. Cambridge is a wonderful city with many wonderful programs and initiatives. We are not, however, immune to the increasing economic divide that is ravaging our country. With the people, finances and determination Cambridge possesses as a municipality and as a community, we will be able to tackle this issue in ways other municipalities cannot.

I would like to thank all of those who participated in creating the report, who attended our focus groups and who filled out the online survey. I would also like to thank all the support staff, including Annie Nagle from my office, who was instrumental in the completion of this report. Finally, I would like to extend great thanks to the mayor and his office for recognizing this as an important issue and appointing the commission.