Former T.T. the Bear’s Place will be Sonia’s, serving food of Middle East (but no alcohol) 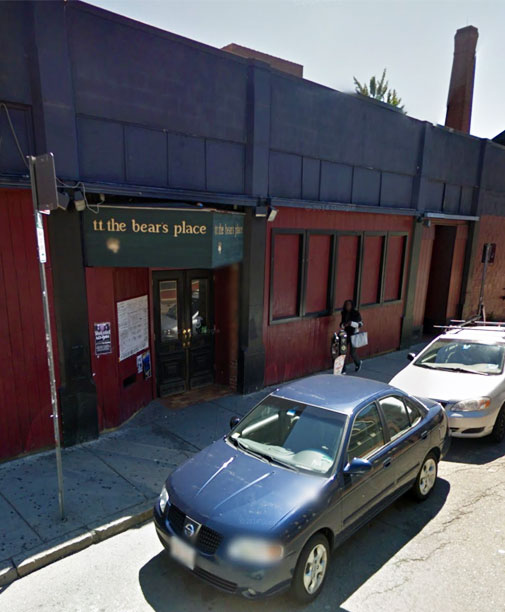 Former T.T. the Bear’s Place will be Sonia’s, serving food of Middle East (but no alcohol)

Owners of the Middle East and ZuZu nightclubs and restaurants will expand into the former T.T. the Bear’s Place. (Photo: Google)

Central Square is getting a music venue to replace the closed T.T. the Bear’s Place, albeit one that will at least temporarily serve up its bands without also serving up beer, wine or booze.

The Sater family bought the property encompassing its Middle East and ZuZu, as well as T.T.’s, for $7.1 million in December, forced by pressure from the family of the longtime landlord, and in turn raised the rent at T.T.’s significantly to help pay off the mortgage. The club closed at 10 Brookline St. after more than 40 years booking bands and selling beer, and the Saters said they hoped to keep using the space as a nightclub, maybe even with no gap in performances.

On Tuesday, co-owner Joseph Sater appeared before the License Commission and won permission to transform the space into a club called Sonia’s – named after sister Sonia Sater – adding the same food as at the neighboring Middle East and operating under the same common victualler license, although there will be no connection between the properties customers can pass through.

There will be renovations in the former T.T.’s space to “open the place up,” he said, allowing room for another 350 people to dine and enjoy music, up from the current 300. The pool tables will be removed and the centerpiece bar will be cut in half – but kept.

T.T.’s owner Bonney Bouley holds the liquor license tied to that address, and until she uses it at a different address or transfers it, either by selling to the Saters or others, there can be no alcohol served at 10 Brookline St. – what’s called a pocket license.

“Down the road we will serve alcohol,” Joseph Sater said. “They have a pocket license, and we don’t want to pressure them.”

Demolition has begun in the space, and Joseph Sater said he expected it would be three or four months until Sonia’s is ready to open, making a launch likely in early 2016.

The bookings will represent a variety of genres, like at The Middle East or former T.T.’s. “In live music today, you have to have some of everything,” Joseph Sater said.

By virtue of not selling alcohol, Sonia’s will be the square’s second all-ages or 18-plus rock venue including the Out of the Blue Too art gallery on Massachusetts Avenue. (The art gallery is licensed for gatherings of up to 99 people and the right to ask for up to 30 one-day beer and wine permits a year.)

The T.T.’s liquor license has been placed with a broker for sale, former T.T.’s assistant manager Kevin Patey told the commission, but Bouley is also looking into “other possible options, including partnering up with someone new.”

Patey asked for time for Bouley to investigate options, and the three-member commission voted unanimously to hold the license as inactive for six months, with the potential for another six months afterward.