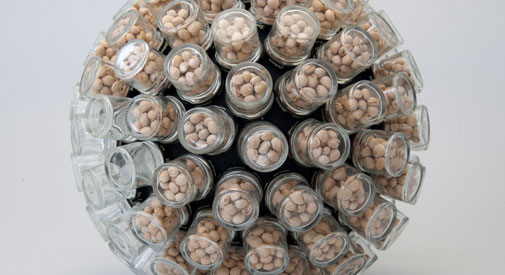 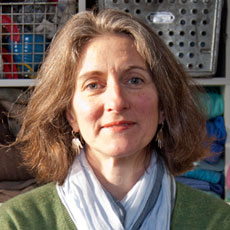 Artists are prone to making statements with their work that might leave the average viewer mystified, and Michèle Fandel Bonner is no different.

She specializes in wall hangings and sculpture made from what she calls “the castoffs of daily life” such as cherry pits, champagne caps and wooden spools – on display starting Oct. 30 at the Chandler Gallery in the show “Piecework” – and does a lot with clothing labels. They catch her attention, she says, because she sees every label affixed to our clothing as “a little graphic that someone designed hoping for attention.”

So far, so good, although sometimes they just want attention so we tumble-dry only.

Bonner’s attention is caught, though and she is clever and good at repurposing those little items in surprising ways, including as taliswomen dolls (which won first prize in the gallery’s “Small Works Salon 2015: Word + Image”) and her “Care,” in which labels with cleaning instructions are sewn into a cross shape – the international symbol for medical care. 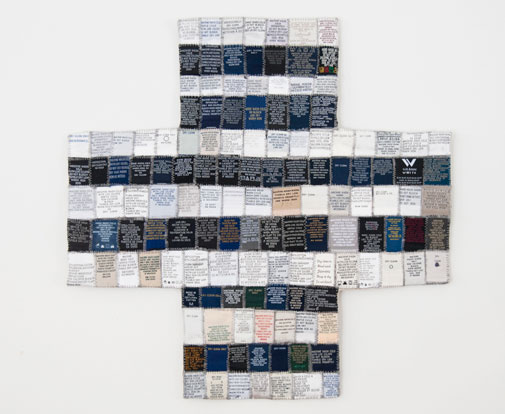 But then Bonner takes the message another step: “Separating the label from the clothing undermines the industry that gives people the impulse to buy clothes,” she says. “It shows how absurd yet how true it is that such a tiny thing can have so much power.”

Does it really do any of this? Anyone who’s ever bought clothes they’re just going to ruin, say, by machine-washing after forgetting what that label says, might not be so sure.

Bonner has more going for her, though. She says she’s also simply “interested in the changing meaning of the objects when reworked, sorted and arranged into multiples,” and that gets us back on board – especially because it’s interesting to see the many ways she can rework those materials, and what themes repeat.

Her works often include circular repetitions, for instance. In “Ordered Chaos,” zippers follow a downward spiral enclosing a smaller and smaller hole to form a tornado, a spiral visible also in “Empty Nesting Baskets,” a series of round baskets knitted from recycled T-shirts and hung horizontally in order of size. 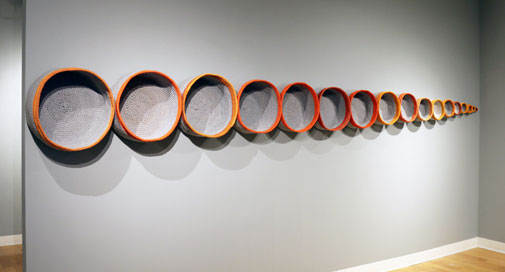 In “The Short Window of Cherries,” jam jars filled with cherry pits form a globe of cylindrical windows. (According to Bonner, the piece “comes from my childhood memory of climbing backyard cherry trees after dinner for dessert. It’s a reminder to savor what I have, when I have it.” Solid! Fully aboard with this.) 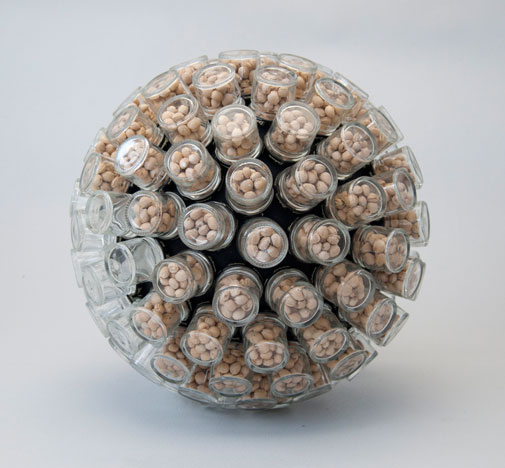 Whatever viewers make of the higher-level thinking that manifests (and manifestos) in an artist’s work, Bonner has an unstated, if not unconscious mission: to stagger by the sheer amount of effort that goes into collecting and assembling her materials. The power they have seems to be over the artist, not us, but that’s even more worthy of our attention.

“Piecework” runs Oct. 30 to Nov. 30; gallery hours are 10 a.m. to 5 p.m. Mondays through Fridays and by appointment. The exhibition has an opening reception from 6 to 8 p.m. Nov. 5, also at the Chandler Gallery, 20 Sacramento St., in the Agassiz neighborhood.