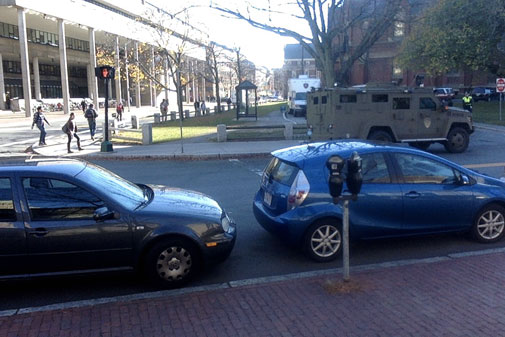 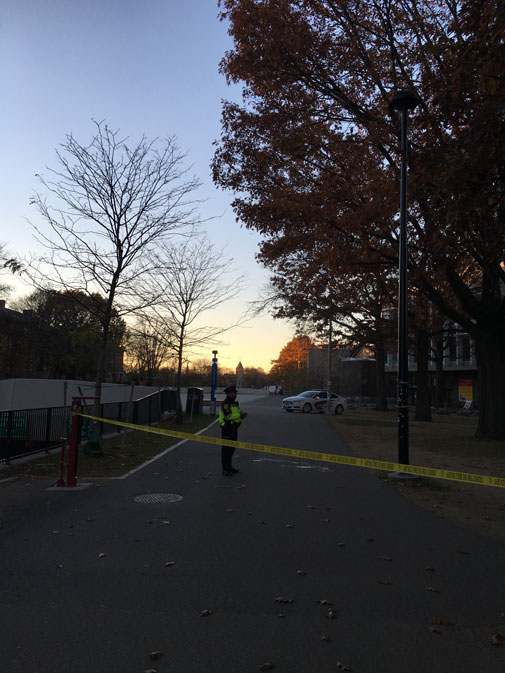 A Harvard University police officer watches over campus toward the end of a Monday shutdown. (Photo: Gus Rancatore)

Harvard and Cambridge Public Schools are facing safety concerns today, with Harvard Yard locked down and the nearby science center plaza emptied and a heightened police presence at public schools after a bomb threat appeared on a blog.

With the threat and a report of a suspicious package on Winthrop Street in Harvard Square coming at 12:03 p.m. – as well as Monday school bomb threats stretching from Tucson, Ariz., to Glen Ellyn, Ill., and in Massachusetts at Cape Cod Community College and Fitchburg State University – Harvard and Cambridge police were taking safety seriously. Harvard Police received the bomb threat via email at about 11:57 a.m., police said.

The timing was called “unnerving” by some after the coordinated terrorist attacks in Paris on Friday that killed 129 and wounded 352 people.

Sever and Emerson halls and Thayer, a dorm, were cleared at Harvard along with the science center as police, fire, K9 and bomb personnel prepared for an hours-long search to clear the threat. Students were herded out of the buildings and yard, their classes canceled, and even the Bon Me food truck was forced to relocate to clear the area as helicopters circled overhead.

A campus alert announced the evacuations at around 12:25 p.m., and Harvard officers were in action quickly, clearing the yard and letting in personnel for the search. A number of streets near the Harvard campus were closed to inbound traffic, police said.

The buildings had been cleared of threats and reopened to students and others by about 5:30 p.m. Cambridge police released a statement timestamped 5:55 p.m. saying:

“Nothing to substantiate the emailed threat has been found and the investigation regarding the source is ongoing.”

At public schools, meanwhile, classes went on after searches found nothing “unusual,” according to a morning letter from Cambridge Public Schools Superintendent Jeffrey Young.

“Safety and security personnel inspected all school buildings before students and staff arrived,” Young said, after city police learned of an anonymous threat via email indicating someone was planning to bomb “cambridge mass city schools.”

The threat was “posted to an anonymous blog and then forwarded anonymously to the CPD,” Young said.

Police Commissioner Robert Haas said the threat was posted at 4:48 a.m., and the warning came shortly afterward. “The only reason we got it is that some person saw it,” Haas told city councillors at a Monday evening roundtable with the School Committee. An investigation into the threat has begun, he said.

Police also contacted federal officials, and Young said he met with the city manager and police  commissioner early Monday to assess the situation and determine next steps. As a result, “in addition to the officers who are normally assigned to our public schools, the CPD has assigned additional officers to provide enhanced security,” he said.

But the school day went on because it was determined there was “no credible threat,” he said.

“The care and safety of our students and staff is our utmost concern. We acknowledge and appreciate that you entrust your families into our care each day, and it is a trust we do not take lightly. In the meantime, thank you for your patience, understanding and support. I will communicate with you again shortly with an update on this particular incident as more information becomes available.”

Previous evacuations of Harvard after bomb threats came in December 2013 and July 2014.