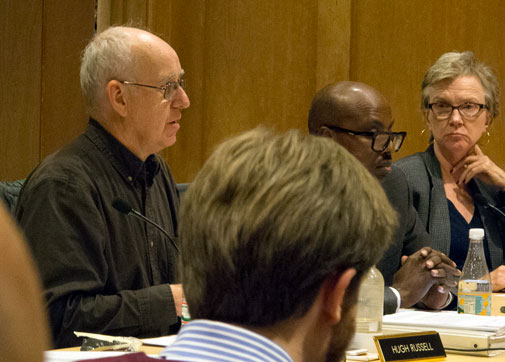 An economic analysis of the proposed Volpe project in Kendall Square was heard for the first time Tuesday night by the Planning Board, and the results put the economic prospects “at the margin,” according to Tom Evans, executive director of the Cambridge Redevelopment Authority.

The board has been clamoring for city planners to provide it with economic analysis for months for the project, which would see the federal John A. Volpe National Transportation Center rebuilt on a smaller footprint, paid for by private redevelopment of the land around it. The planning staff worked with the redevelopment authority to have HR&A Advisors work up an economic analysis; the authority had already contracted with HR&A to study development economics in the so-called MXD zoning area of Kendall Square.

According to the analysis, Evans told the board, redevelopment of the 14-acre parcel in Kendall Square would leave a real estate developer with $280 million to cover the cost of building a replacement Department of Transportation research center and any environmental remediation (necessary because of Kendall’s industrial past), as well as other potential costs. 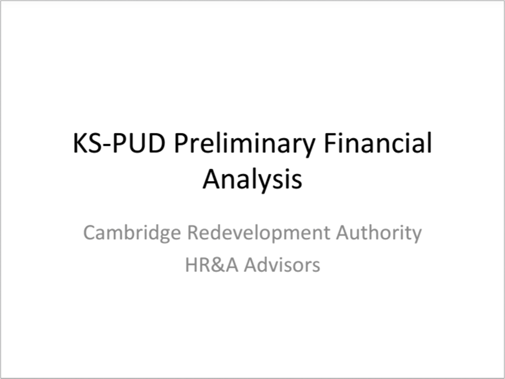 Click the above image to see the economic analysis presented Tuesday to the Planning Board.

No one is sure just how much Volpe’s 400,000-square-foot facility might actually cost, but if the full estimated $280 million went to it, it would be $700 per square foot. But the costs could be as much as $1,000 per square foot, according to city councillor Dennis Carlone, an architect and urban designer.

“My question is, does this work?” board member Hugh Russell asked. “[Is it] reasonable to expect that the site would get transformed? Is it a gold mine for somebody? Is it marginal?”

“I think we’re at the margin, really,” Evans replied. “I certainly don’t think this is a gold mine, based on what we expect to be the needs of a new facility [and] what we understand to be the site challenges. Remediation costs are not – they’re kind of an unknown and often surprise developers – they’re usually not cheap. There’s a pretty high expectation for this project to come in with high sustainability measures, really strong open space contributions and transportation mitigations.”

Evans said the “quick preliminary analysis” from HR&A was delivered to him at 1 p.m. Tuesday, and was based on what he called a horizontal development model: that a developer might come in and deal with the costs to make the land developable by building streets and doing environmental remediation, then subdivide the land and sell it to “vertical” developers who would “make the buildings come out of the ground.”

HR&A’s analysis was based on an “internal rate of return” of 15 percent, which Evans called on the low end of the industry standard, and presumed a split of 38 percent residential, 27 percent office, 27 percent lab, 5 percent retail and 3 percent startup innovation space, all over 2.9 million square feet of development.

The analysis assumed 15 percent of housing units would be for low- and moderate-income affordable housing and 5 percent would be for middle-income.

“This is a quick, three-week analysis we did. There’s inherent uncertainty in anything [done] that quickly,” Evans said. While he was unable to estimate the uncertainty of the analysis, he noted that most construction projects build in a 10 percent to 20 percent contingency.

The board heard a summary of recommended changes from city planning staff to the Volpe zoning, as well as took public comment. Faced with stated time pressure to get a recommendation to the City Council that would allow the council to adopt the zoning in December, the board voted to recommend the zoning amendments “substantially” as recommended by city staff.

The board also made changes of its own, most of which were intended to allow additional flexibility for developers. For instance, the limitation of a single landmark 500-foot-tall building was modified to allow the board to waive the single-building limit if a compelling case were made – multiple 500-foot buildings are now possible. A restriction on how much of the parcel could rise above 250 feet was altered so 10 percent of the lot area could hold such taller buildings, although the board could waive the 10 percent restriction.

The council’s Ordinance Committee will take up the Volpe petition Dec. 1.