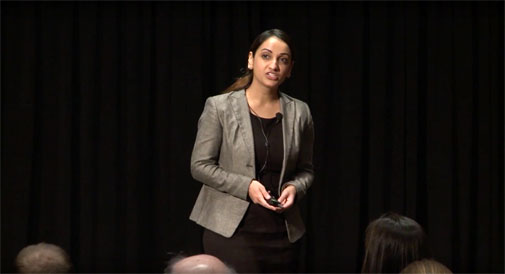 As Cambridge Health Alliance and other hospitals work to reduce the number of patients who visit the emergency room unnecessarily, doctors are realizing that many of these visits are connected to alcohol abuse.

When Alliance doctors looked at patients who went to the ER more than eight times last year, they found 27 percent of the visits were for “alcohol-related conditions,” chief executive Patrick Wardell said in testimony submitted to the state Health Policy Commission in September. Overall, 38 percent of visits by more frequent users were for mental illness, including alcohol or drug addiction, and they came to the emergency room more than 14 times on average during the year, Wardell said.

Coincidentally, Dr. Arshiya Seth, a doctor at Somerville Hospital Primary Care, and three colleagues – a nurse, receptionist and medical assistant who work with her – saw these patterns from ground level and wrote a short research paper about one of their patients, whom they called “Mr. Smith.”

“This is a story of our patient Mr. Smith (name changed) who struggles with alcohol addiction and is a high utilizer of ER,” the paper begins, saying the patient went to the Cambridge Hospital emergency room more than 84 times in 2014. “Every time he came in he was intoxicated,” Seth said in an interview.

“There were times when he was going to the ER three times in a day and then he would disappear,” Seth said.

Aside from the personal cost to patients, their families and their doctors, the financial impact is tremendous. Alliance spokesman David Cecere said the Alliance has estimated the expense to treat such patients, but declined to provide the numbers, saying they are “not publicly available.”

Cost estimates are sparse; Seth’s paper estimated that the cost of treating patients whose only medical problem was being drunk was $900 million – the same figure from a study in the American Journal of Emergency Medicine cited last summer in a Chicago Tribune article by a Chicago physician – but she didn’t have a source for the estimate and said she did not have numbers for just CHA. An article published in 2005 in the Annals of Surgery estimated that a “brief alcohol intervention” by ER doctors with patients injured as a result of drinking could save $1.82 billion in medical costs annually.

Seth said she and other doctors trying to help patients with drinking problems contend with lack of alcohol treatment resources and communication gaps among providers. It took more than 24 hours on average to find an available bed in a detoxification center, the first step in treating patients with alcohol or drug abuse problems, when Seth wrote her paper. The average wait is still more than 24 hours, Cecere said.

These patients may see doctors and visit ERs at other health systems, but there is little communication among institutions that treat them, Seth said. So when one of her addicted patients “disappears” she has no idea whether they turned up somewhere else, she said.

Improvements on the way

Some improvements are being implemented or in the works. By June 30, the Alliance expects to expand an initiative to integrate mental health clinicians into primary care from the existing six practices to 12 “core primary care sites” in Cambridge, Somerville, Revere, Malden and Everett, Cecere said.

The Alliance is the state’s second-largest “safety net hospital” serving poor patients and those without insurance, and has been seeking ways to tighten operations and reverse years of financial losses on health care operations. Last year it shuttered a psychiatric emergency room service and began treating mentally ill patients in its main ER.

In addition, the Massachusetts Hospital Association is examining the possibility of establishing a statewide Emergency Department Information Exchange, as recommended by an association task force on ER management of opioid drugs, Cecere said.

And Cambridge Health Alliance has established teams of doctors, nurses, social workers, pharmacists and a range of other workers to manage treatment of patients with complex needs, including people with chronic alcoholism. The health system is trying to better identify and track those patients so they can be enrolled in a primary care practice and referred to complex-care management teams, Wardell said in his testimony.

Now, when a patient like “Mr. Smith” shows up in an Alliance ER, “an alert goes out to the complex care team and me,” Seth said. “That is how you can make a followup appointment” with her or another primary care practice, finding a bed in a detox unit if needed.

“There is constant communication. We are not losing them,” she said. “Of course we are not successful all the time … [The patient] may not show up for his appointment.”

And what of “Mr. Smith”? By last February, he had visited the Cambridge emergency room 24 times in less than two months – when he disappeared. Then, in a rare episode of communication among different hospitals, the admitting doctor at a Boston hospital contacted Seth’s practice. “Mr. Smith” had been admitted to that hospital and almost died, Seth said.

“The complex care team [at CHA] took over and he didn’t go to the ER for four months,” she said.

“Now, he’s falling through the cracks and he’s back to drinking,” Seth said. Instead of going to the emergency room, though, he’s coming to the Somerville primary care clinic, she said. CHA workers also got him admitted to a rehabilitation program, Seth said.

“We haven’t fixed the problem, but it’s better,” she said. “Patients have to be ready and engaged. While they get ready we can stand by. That’s what we learn.”

In a measure of the obstacles facing her and other doctors, Seth called the up-and-down journey of that patient “a good story.”

Encountering patients like this “surprised me and made me feel helpless,” she said. “You all want to help and you’re not able to. That’s why we came up with this [research presentation]. We are working so hard and we need help.”