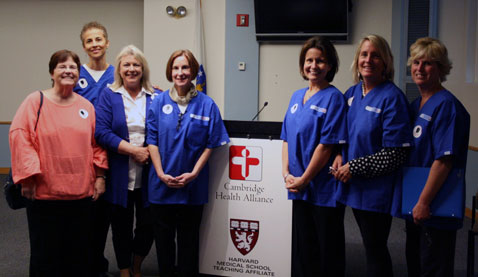 Cambridge Health Alliance psychiatric staff fought against cuts a year ago, and now are protesting another money-saving move that would combine psychiatric and medical emergency rooms. (Photo: Massachusetts Nurses Association)

After the Massachusetts Nurses Association issued a press release Friday castigating the change, the hospital offered some details but few specifics about layoffs and physical capacity under the new setup.

“By integrating services, all emergency patients will have the same access to the full range of physical and mental health services, which will improve quality and timeliness of care. This integration is in line with industry best practices, as few standalone psychiatric emergency rooms remain throughout the country,” the Alliance said in a statement.

The health system also said half of its emergency psych patients, about 2,500 people a year, are already treated in the medical ER.

Union members may be able to move to other Alliance jobs under seniority rules, but they won’t serve emergency psych patients, Lyons-Collins said. “All of the [psych emergency room] staff have a wealth of experience” that general ER nurses don’t have, and that helps avoid restraints and assaults, she said.

The union was told that two psychiatrists and one social worker would be assigned to on-call duties for the general emergency room, apparently replacing the psych nurses on staff, Lyons-Collins said. Five locked single rooms now reserved for psychiatric emergency patients, including one for a child, will be reduced to two rooms, with another room that can be converted if necessary, Lyons-Collins said.

“I do believe that the patient will be the one to lose,” she said.

Alliance spokesman David Cecere said some staff will either be transitioned to other roles or laid off as part of the transition, but he did not provide details. The new space and staffing will be adequate, with psychiatrists, residents (doctors-in-training) and social workers providing care, he said. “Specially trained nurses” will help, Cecere said, but did not directly contradict the union claim that psychiatric nurse positions will be eliminated.

The latest Alliance financial report for the first eight months of the fiscal year shows that volume in the psychiatric emergency room was 20 percent less than predicted. Gross billing for those services was 12 percent more than predicted, though. Hospitals often charge much more for services than they expect to get from insurers or government agencies, so the meaning of the billing figure wasn’t clear. Still, it was included in the Alliance’s performance report for the eight months from July 1 to Feb. 28.

The Alliance, second-largest “safety net hospital” in the state for poor and uninsured patients, reported this month that it has already lost $21.5 million eight months into the fiscal year, after officials had predicted a loss of $19 million for the entire year.

Head of psychiatry Dr. Jay Burke and senior director of psychiatry Lisa Foley attended a private session of the Alliance finance committee after the loss figures were disclosed in a public session; Burke and Foley were at the public meeting and stayed after the committee closed its meeting to discuss “strategic planning.”

The Alliance said the integration of psych emergency services into the main ER was expected to save $1 million a year.

Last year at this time the hospital system ran into a firestorm of protest after applying to close 11 of 27 inpatient psychiatric beds for child and teenage patients, citing losses. After state legislators pledged to seek extra money for the Alliance to provide the service, it withdrew its application to the state Department of Public Health. The department had ruled that the reduction would significantly affect the regional availability of services; the Alliance could have gone ahead with the cuts anyway.

In this case, the Alliance doesn’t have to apply to the state because it isn’t eliminating a service. The Alliance said Friday that it has told state agencies, elected officials and “advocacy groups” about the plan “and we have received very positive feedback about our commitment to provide essential mental and behavioral health services given the financial challenges associated with reimbursement and health reform.”

Union officials said they are organizing a petition campaign against the move.