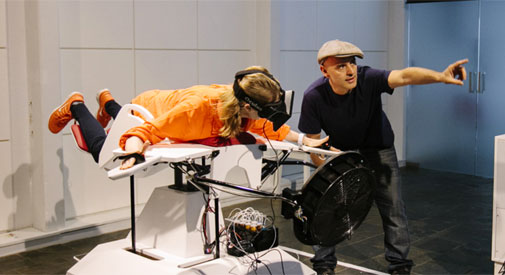 The full-body virtual reality experience called “Birdly” is coming to Kendall Square’s Le Laboratoire Cambridge for three days next month, and it’s probably not going to be enough to satisfy anyone in the area who’s ever wanted to soar over a city, buffeted by wind and held aloft by nothing but the flapping of their own wings.

This flight simulator unlike any other includes goggles, headphones and a sophisticated interactive table equipped with a fan – making it the 4-D Imax of virtual reality compared with the weak Google Cardboard or Oculus Rift versions that will increasingly populate our living rooms. (Birdly uses an Oculus Rift, which is due for official release next year.) 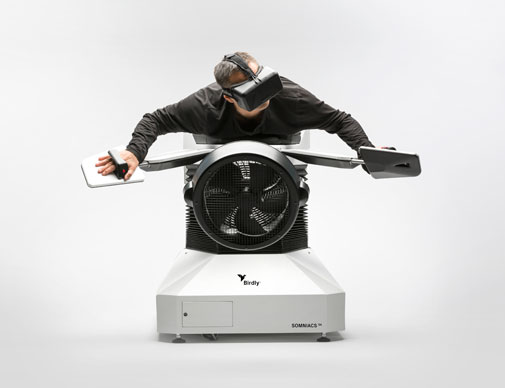 “Everyone at some point has dreamed of flying, and Birdly provides a vivid, immersive experience that simulates that one-of-a-kind sensation. This installation makes that dream a reality,” says Max Rheiner, creator of the Birdly system. “Birdly will make you feel like a kid again.”

The installation was set up at the Sundance Film Festival this year, and tech writers from around the country made pilgrimages and announced themselves converts. The Verge called it “the kind of VR experience that turns skeptics into true believers,” and Mashable called it “beautiful and extremely vivid … the first one in which I felt like my whole body had been transported into the world I was in at that moment. And it all clicked when I turned my head to the side and saw my wings, covered in brown and black feathers.”

Carrie Fitzsimmons, executive director of Le Lab – which is partnering on the Birdly installation with Swissnex, the Cambridge consulate of the Swiss Confederation calls it “a radical step forward for virtual reality” and warns that it might be tough to squeeze in some flight time.

Birdly will be on display Dec. 2-5 at Le Laboratoire Cambridge, 650 E. Kendall St., Kendall Square, with an opening reception and lecture by Rheiner from from 6 to 9 p.m. Dec. 2. (Those wishing to attend the opening reception should RSVP to [email protected]. Space is limited.) Experiencing Birdly is free, but visitors must be in the gallery to schedule same-day appointments – and in the interests of accommodating as many visitors as possible, Le Lab is not taking advance reservations. “The Trouble with Jellyfish” contemporary art installation by Mark Dion and marine biologist and author Lisa-ann Gershwin is ongoing during Birdly.