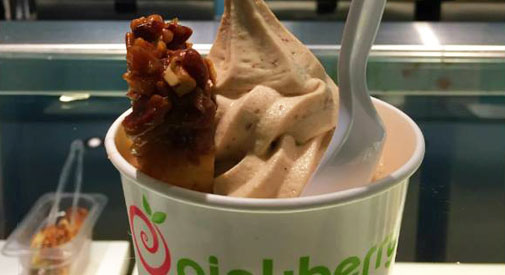 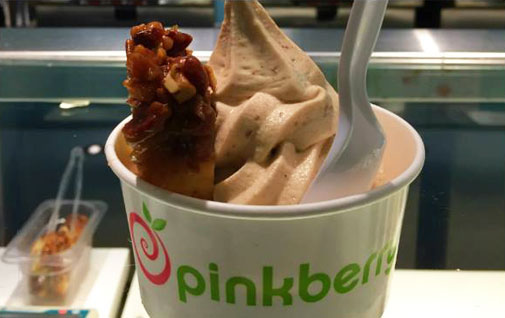 The sticky buns at Flour Bakery in Central Square – the same ones co-owner Joanne Chang used to beat Bobby Flay in a Food Network throw-down in 2007 – are taking new form, becoming a December yogurt flavor at the Pinkberry in Harvard Square.

The flavor concocted by Chang and the Pinkberry R&D team, “Joanne Chang’s Sticky Bun,” of course has hints of cinnamon, pecans and caramel. Its suggested topping: actual sticky bun from Flour, also available just for the month.

It’s the first “celebrity swirl” for the local 10-chain frozen yogurt chain, similar to how Anna’s Taqueria partners with local names to roll burritos or create menu items to benefit a charity. The charity for the upcoming month of sales of Joanne Chang’s Sticky Bun is Share Our Strength’s No Kid Hungry campaign, which says it connects kids in need with nutrition programs and teaches low-income families to cook healthy, affordable meals.

“I’m a huge Pinkberry fan, and it goes without saying that having your own Pinkberry flavor is an honor. That all being said, the opportunity to generate awareness and donations for No Kid Hungry, a charity that Christopher and I are closely tied to, made this all that much sweeter,” Chang said, referring to husband and Flour partner Christopher Myers.

Ten percent of the flavor’s proceeds will go to the No Kid Hungry campaign, according to Pinkberry’s corporate offices. In addition to selling in Harvard Square, it will be available for the next month at chain locations in Boston on Newbury Street and at South Station and the Prudential Center and in the North End; in Newton’s Chestnut Hill; and in Hingham, Wellesley, North Beverly and the South Shore Plaza in Braintree.

“The Celebrity Swirl campaign will be an ongoing initiative based on the flavors that we revere here in New England. Whether it be an actual iconic product, a particular brand or an individual that is part of the lexicon that makes up the culinary landscape, we want to honor that. We also thought it was extremely important to ensure that a percentage of the proceeds went back to a charity that was meaningful to our flavor curator.”