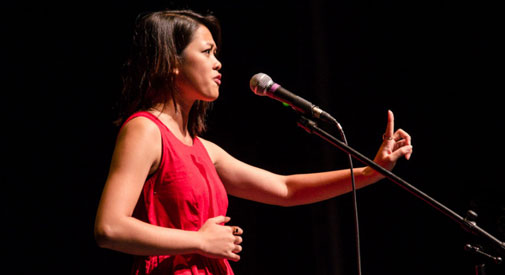 Chocolate, cocktails and the debut of a Youth Poet Laureate program.
By Marc Levy 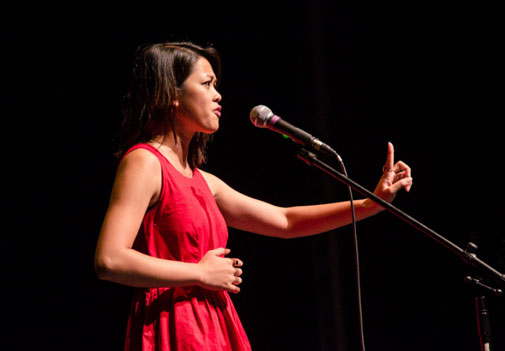 Young poets from throughout the state will perform Wednesday at the Poetry Planetarium fundraiser put on by the Massachusetts Literary Education and Performance Collective. (Photo: Richard Beaubien)

There’s a lot that’s new with the young poets of Louder than a Bomb and the Massachusetts Literary Education and Performance Collective, but it all starts Wednesday with free chocolate and cocktails.

As the collective heads toward its fifth anniversary, it’s introducing a Youth Poet Laureate program and a yearlong campaign to raise $25,000 to ensure matching funds from the national Youth Speaks’ Brave New Voices Network Initiative, said Amanda Torres, co-founder and artistic director of the Louder Than Bombs youth poetry and spoken word group.

That starts at Wednesday’s Poetry Planetarium fundraiser, where the poets hope to get a jump on the match, raising as much as $10,000 at a romantically decorated Somerville Armory, Torres said.

But there’s no hard sell at this event. “It’s a fundraiser, but also a friendraiser,” she said. “We want to bring some more folks into the family.”

After a cocktail hour with youth ambassadors mingling and doing creative icebreakers, there will be 40 minutes of performances by young poets from across the state – capped by a 10-minute ask led by an alumni speech. People can write checks, fill out a pledge card or grab a copy of a local poetry anthology printed in partnership with Books of Hope in Somerville.

That will likely go down easy after a night of cupcakes from Sweet and chocolate cake and other treats, as well as some savory finger foods and appetizers. (“We don’t want to just get folks hopped up on sugar,” Torres said.)

Perhaps the most exciting part of the night is the introduction of the Youth Poet Laureate program, similar to programs run by states and cities. The call will go out in January for nominations based on the quality of written and performed work and commitment to civic engagement. The young winner, as judged by local cities’ poet laureates, gets a book deal in addition to the title, Torres said.

The future youth poet laureate could be among those reading Wednesday. Either way, attendees should “be prepared to meet young people who are shifting the culture in Boston and the state,” she said.

Somervillian Rachel Lee said the event should be a contender for anyone looking for nonprofit organizations to support:

“Especially in light of so many terrible things in the world, we must nurture hope in all of its forms. MassLEAP exists to give voice and stage to the many creative brilliant young people in Massachusetts.”

The Poetry Planetarium fundraiser takes place from 7 to 9 p.m. Wednesday at The Center for Arts at the Armory, 191 Highland Ave., Somerville. Guests can RSVP for the free event here and email questions to [email protected].

This post was updated Dec. 1, 2015, to clarify a full dinner was not being served and to amend the length of poet performances.