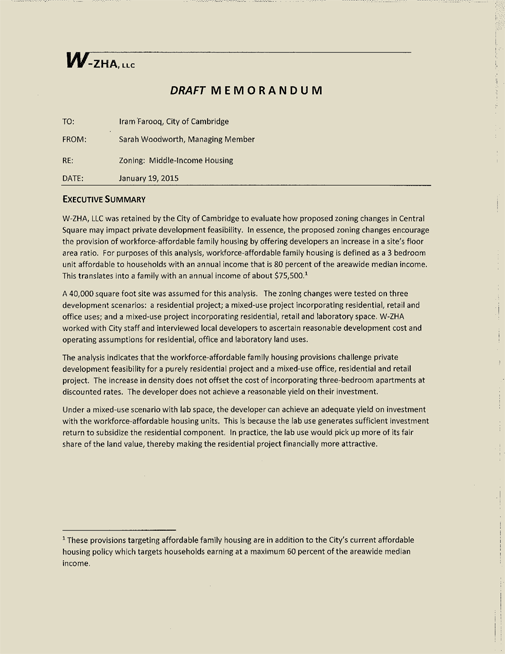 Click on the image to read a PDF copy of the report.

City planners are saying no to making a comprehensive housing plan part of the first year of a citywide master plan process, as proposed by three city councillors in November, but say “we are committed to ensuring that housing remains a central topic in all phases of the citywide plan.”

The news arrives officially on councillor’s desks at their Monday meeting, along with a long-missing report looking at whether some suggestions about housing made by the “C2” plan for Central Square will work financially.

The report says the C2 suggestions don’t work if a developer builds just housing, or even a mix of office space and housing, with an eye toward adding three-bedroom apartments good for families onto the market.

“A residential project is feasible under existing zoning, but not feasible under the proposed [C2] zoning,” consultant Sarah Woodworth says in the report, dated Jan. 19.

Only if a developer builds “significant” amounts of leasable laboratory space along with the housing can the developer “achieve an adequate yield on investment,” she says, summing up:

“Developers will not pursue residential projects or projects with a mix of office, residential and retail land uses if there is a requirement that workforce-affordable, three-bedroom units are required to be part of the building’s unit mix.”

The city of Cambridge may want to consider letting developers build an equivalent amount of “workforce-affordable units” nearby but separate from the main project, she says, but City Manager Richard C. Rossi said discussion among city officials found that didn’t fit with the city’s approach to affordable housing, which demands that it be “marbled” throughout a building and indistinguishable in quality from apartments built to be rented at any rate the market will bear.

Coming after a red ribbon commission examining Central Square and its future, the K2C2 process began with the city awarding a $350,000 contract to the consultant Goody Clancy in April 2011. After an 18-month process, the firm’s reports on Kendall and Central were released by the Community Development Department in December 2013. But the plans were never brought forward for wholesale approval as widely expected, and trailed by six months the May 7 draft zoning submitted by developers Twining Properties and Normandy Real Estate Partners in their bid to put up a project called Mass+Main. (The project has since been approved.)

On Jan. 7, 2014, exactly seven months after the developer’s zoning proposal was received, then assistant city manager for community development Brian Murphy told the Planning Board a consultant had been hired to look at economic assumptions made in the C2 process and was “working on a report now. We hope to be [before] the Planning Board with that in the near future. [We’ll] sort of be testing some of the underlying assumptions and whether or not it actually makes sense and to try to come back in with K2 and C2 zonings for discussions.” The consultant was Woodworth, principal of W-ZHA of Annapolis, Md.

Nearly a year later, the report was not yet final, Murphy said, because “some of the research informing the analysis, such as interviews with relevant parties, took longer than expected.” Although the report was filed Jan. 19, it was never made public, and when spring came and councillors debated the Mass+Main zoning, they found themselves with the same questions as had faced the city two years earlier. A March 30 policy order by councillors Carlone, Craig Kelley and Nadeem Mazen asked again the whereabouts of the report by Woodworth.

During the past election season, the Woodworth report became a political concern, but the report still wasn’t released.

Iram Farooq, assistant city manager for community development, said in late October that she would make the study available, then failed to produce it or answer messages asking about the study’s whereabouts.

A letter from her dated Nov. 8 showed she had changed course, saying the report was “exempt from disclosure” under state law because it related to policy issues “that are still being analyzed and developed.” It would be released to the City Council when the work was done “and the study report is final,” she said.

Cambridge Day filed an appeal with the state saying Farooq misunderstood the law. That appeal was pending as the city released the report to the council for discussion Monday, with Rossi making clear in his introduction that Woodworth’s report remains a draft – just as it was when given to the city 11 months ago.

The report’s effect on city housing may be negligible, as Farooq has said the city is asking a consultant to take Woodworth’s findings on C2 to the next step: “how to make it viable.”

Councillors and residents spoke in favor of a housing plan as a big step toward resolving an ongoing city crisis in which the very rich can afford to rent and buy and some of the poorest residents are provided for – but the middle-class is increasingly squeezed out.

But Farooq suggested the a housing plan would have to be just another part of the master plan, not an early action item for the first year.

“It is not feasible to complete a comprehensive citywide housing plan during the first year in addition to the Alewife study and keep the project timeline intact,” Farooq said. “It is critical that discussions regarding housing and housing policy be a substantial feature of the early phase and continue throughout all phases of the plan.”