‘Joy’: Director moves away from magical telling of the making of the Miracle Mop 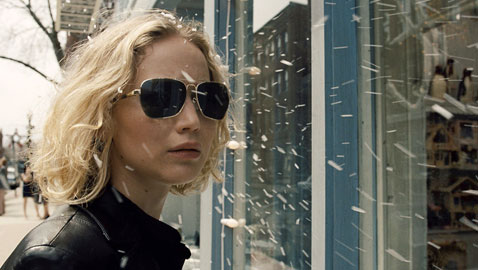 ‘Joy’: Director moves away from magical telling of the making of the Miracle Mop

There was a time the anticipation of David O. Russell’s next project carried the excitement of a Christmas package. No matter what he had achieved before, he was always onto something new and radically different. His first films ranged from an angry, depraved coming-of-age tale (“Spanking the Monkey”) to a Desert Storm “Wild Bunch” of sorts (“Three Kings”) and a quirky little ditty that seemed stolen from the vault of Wes Anderson (“I Heart Huckabees”). After that, Russell spun up the reliably crafted “The Fighter,” a satiating and admirable effort but also something pat and conventional, and from there the cinematic pixie dust of unpredictability and quirk seemed gone. That’s not to say “American Hustle” and “Silver Linings Playbook” didn’t have their merits – they were exceptionally well acted (Oscar nods all around) and competently composed – but missing were those hidden pockets of wonderment among the rough edges. 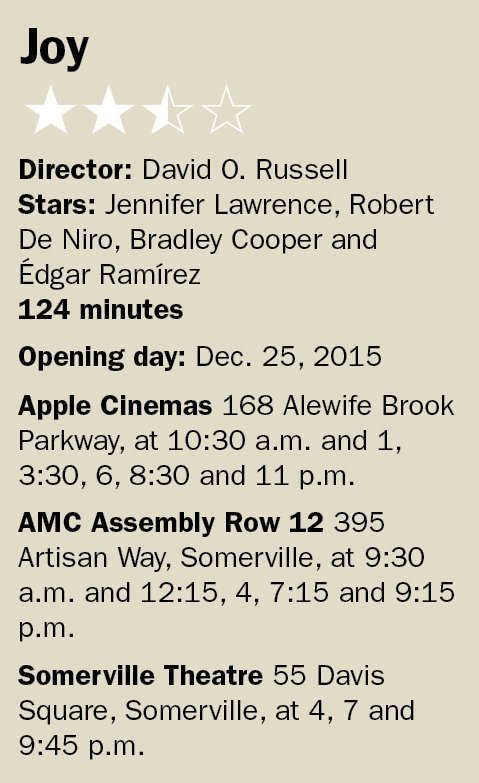 “Joy” marks more of the same – not a bad thing, as it features the ever determined yet effervescent Jennifer Lawrence, back under Russell’s instruct for the third time. But even given Lawrence’s vast talents, is the invention of the Miracle Mop as worthy a fact-based feature as “The Fighter” and “American Hustle”? It’s all about scale. “The Fighter” was rooted in the hardscrabble world of boxing, opioid addiction and the tawdry cauldron of the struggling working class, while “Hustle” reveled in the cheesy polyester fashion and over-the-top personas of the late ’70s. Here, Lawrence is on her own to pull the yoke as the titular inventor of the now-famous mop, but oddly enough (copyright issues?) the name “Miracle Mop” never gets mentioned, though the real-life Joy Mangano does serve as an executive producer. One can only assume her endorsement.

The film follows your basic rags-to-riches arc with some interesting change-ups and Russell trying to knead in sardonic seeds of irony along the way. More interesting than the birth of that mop are the conditions we find Joy living under: a cramped Long Island house with her divorced parents (a stoic Robert DeNiro and a lurking Virginia Madsen, nothing short of excellent), her ex-husband (Édgar Ramírez), an aspiring lounge singer living in the basement, and their two children. The place is remarkably civil considering all the broken bonds and deserves greater examination, but Joy cuts her hand cleaning up a spilled drink and gets the bright idea for the house cleaning device.

So convinced is Joy of the product’s imminent success she wills her father to enlist the mechanics at his garage to hammer out the prototype, and in for it too is his new love interest (Isabella Rossellini, in a humorously domineering turn) who possesses the necessary green to seed the project. It’s an unfortunate covenant dramatically, because besides an occasional interruption from Joy’s jealous half-sister (Elisabeth Röhm) seeking attention or funds, the whole creation of the mop and Manufacturing Finance 101 mumbo-jumbo that ensues becomes a bore quick. The best part of the early struggle comes when Joy and her BFF (Dascha Polanco) try to shill the mops illegally outside a Kmart. From there, a trip down to QVC shopping network HQ – a cement silo in Amish country – finally sends the film into an edgier territory.

The time is the early 1990s, the eve of the Internet boom, when cable was the limitless frontier for making money. It takes some doing, but Joy connects with QVC head Neil Walker (Bradley Cooper), who encourages her to crank out 50,000 units. It sounds a slam-dunk, but since QVC allows only rating-vetted spokespersons and celebs such as Joan Rivers (played here by her daughter Melissa) to do the hawking, things don’t go so well (a prima-donna sales guy can’t figure out how to use the mop on camera), and there’s the little matter of the royalty payments to a Texas businessman who has a claim on the patent, let alone the shady casting company in California that keeps upping their price.

These late developments add sauce, but we’re a long way from the strange home life of Joy that’s weirdly harmonious when it should be dysfunctional. Neil’s behind-the-scenes tour of QVC and the method for feeding in callers to spark sales is part theme park amusement with a dash of RICO throw in. It’s the most unshakeable scene in the film, a happy, helium-filled version of “Glengarry Glen Ross.” Lawrence in all this bouncing around remains straight and focused even as the script cheats her posture. Like her Joy, she endures with a smile and steely resolve, even during the final scenes, later, in the future, close to the now and heavy with maudlin schmaltz – something I wasn’t aware Russell was capable of, and the culmination of which is a mass-produced ending – right off the shelf, total plug and play, everyone on the block has one.