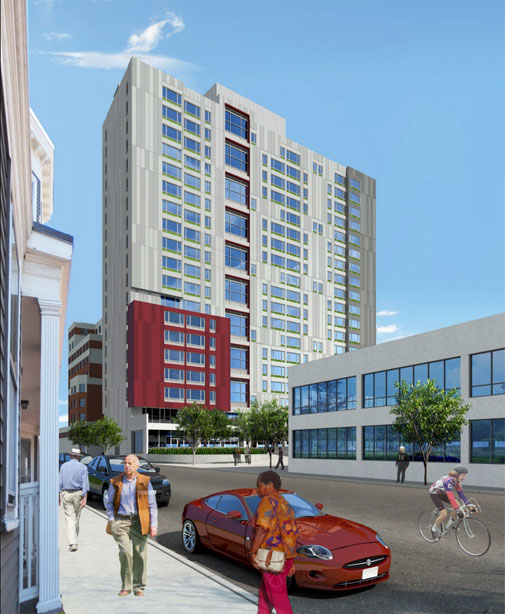 For the second time in less than three months, Cambridge Housing Authority officials have saved a $382 million citywide public housing redevelopment project – this time from a financing gap that would have scuttled the $109 million revamp of nearly 200 apartments for low-income seniors and disabled people in Central Square.

The extensive rehabilitation of Manning Apartments will go forward after CHA reduced a request for $57 million in tax-exempt bonds to help finance the project, to $42 million, and state officials accepted the proposal, consultant Margaret Moran said. The bonds will also be issued over two years instead of this year.

Manning, leaky and deteriorating after few repairs since it opened in 1976, is the second-largest project in the citywide redevelopment plan.

The newest snag came Jan. 14, when the Massachusetts Development Finance Agency, also known as MassDevelopment, stunned CHA by not approving the $57 million tax-exempt bond issue, a deal that had been in the works since 2014, authority officials say. The setback came as a contractor for the Manning redevelopment had been selected, workers had closed off part of the sidewalk on Franklin Street and tenants were being relocated in preparation for the three-year job.

MassDevelopment staff told Cambridge housing officials that its bonding allocation from the state has been cut by more than half, said Margaret Moran, who led the project as a consultant and is now the authority’s planning and development director.

MassDevelopment spokeswoman Kelsey Abbruzzese couldn’t provide exact figures immediately, but said the agency’s bonding cap for housing this year is $100 million, with $60 million additional for jobs. Last year the cap was more than $300 million for both categories.

“We have to make some tough decisions,” Abbruzzese said. “We are in the process of evaluating all private-activity tax-exempt bonds.” She added that MassDevelopment approved $104 million in tax-exempt bonds last year for the authority’s citywide project.

The cut came at the last minute, with MassDevelopment staff learning of the new limit set by the governor’s Executive Office of Administration and Finance “shortly before” the Jan. 14 meeting, Abbruzzese said. But an official in the department said MassDevelopment was told starting last fall that the statewide bonding cap total for all agencies would drop significantly this year.

The official, who spoke on condition of anonymity, also said MassDevelopment had enough bonding capacity to issue the CHA bonds, even with the reduction.

The federal government allocates tax-exempt bonding authority to the states each year according to population, but the state as a whole has less ability to issue tax-exempt bonds this year because there is no carryover of unused capacity from previous years, officials said. That’s because the improving economy has increased demand for the bonds. The Administration and Finance official did not directly answer a question about whether the administration of Gov. Charlie Baker decided this year to change allocations among the three agencies that issue the bonds: MassDevelopment, the Massachusetts Housing and Economic Development and Massachusetts Educational Financing Authority. The official did say that more than half of this year’s total of almost $700 million was distributed to MassDevelopment and Mass Housing Finance for housing projects.

The newest snag arose just three days after the City Council put the finishing touches on the fix for the previous glitch by voting Jan. 11 to accept a newly approved state law that allows the city to keep charging reduced real estate taxes to public housing developments after they become privately owned to get private financing for the huge revamp.

The first obstacle appeared in early November when Baker’s administration raised unexpected objections to legislation that would have allowed any housing authority with similar private financing arrangements to continue making low “payments in lieu of taxes.” Baker administration officials reportedly insisted that Cambridge file a home-rule petition limiting those benefits to Cambridge. The authority said it stood to lose $23.2 million in financing ability if it had to pay full real estate taxes, a move that also threatened the citywide project.

CHA officials have devised a complicated and intricate financing plan that depends heavily on private money to renovate 13 of the authority’s 17 developments (the remaining four were rehabilitated in recent years). The agency turned to banks and investors because federal aid for public housing has been shrinking for years. Five developments, including Manning, are to be upgraded in the first phase of the program.

Under a federal program called Rental Assistance Demonstration, or RAD, the authority is transferring the housing to private ownership, but protecting tenants by retaining ownership of the land and management authority and requiring commitments to keep the developments as low-income housing. Much of the private money comes from selling low-income housing tax credits to investors, who will own an almost 100 percent interest in the properties for up to 15 years, the term of the credits. After the tax credits expire, the authority can buy back the housing.

The financing plan calls for federal tax-exempt bonds to pay for construction and then be replaced by bank mortgages, Moran said. Perhaps more important, MassDevelopment allocates low-income housing tax credits to projects that use the bonds to finance more than half the cost of their developments. Just the loss of tax credits “means a funding gap of $36 million,” Moran said.

The authority would have lost almost $60 million in private financing for Manning, including tax credits, unless MassDevelopment issued the bonds, Russ said in a Jan. 19 letter to the heads of the state’s Administration and Finance, Housing and Economic Finance and MassDevelopment agencies.

That “would result in the complete suspension of the Manning project,” the letter said. “It is unclear if the project would ever be able to muster sufficient resources in the future to continue.”

CHA officials expected the bond approval to be “pro forma,” Moran said; after preliminary approval for the bonds two years ago, the authority been answering technical questions from MassDevelopment as recently as mid-December. “We left a voicemail” at MassDevelopment on Jan. 14 before the meeting, Moran said, but didn’t hear back until the agency said the bonds had not been approved.

When the authority offered its alternative bond request of $42 million over two years, MassDevelopment staff said they could not immediately review it, Moran said, and Abbruzzese, the spokeswoman, said the agency hoped to have a plan for awarding bonds under the reduced cap within about two weeks.

MassDevelopment beat its own two-week estimate, and Moran was able to announce Thursday that the authority would get the $42 million that allowed work at Manning to go forward.

The projects in the second phase of the RAD redevelopment, as well as a separate rehabilitation of the Millers River senior housing development in East Cambridge, also face potential delays or limitations. Moran had already estimated that RAD and Millers River could take half of MassDevelopment’s typical total bond allocation, she said.

“We need to be careful,” Moran said. “We might have to approach Phase 2 and Millers River differently.”