Chewing away at budget gap in the millions, school officials see ‘segregation’ in streams 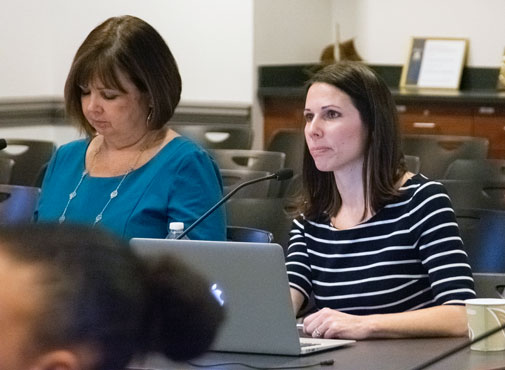 Chewing away at budget gap in the millions, school officials see ‘segregation’ in streams

Young said he will meet with school principals to see if the district can find savings and “continue to meet with city staff regularly.”

Though still relatively early in the budget process, committee members got a chance at the roundtable to express their major areas of concern for next year’s budget, while Young said the department’s own overarching goals remained the upper schools; aligning curriculum and instruction across the district; an “aligned multi-tier system for social-emotional support”; and continued development of teaching skills, including by working with consultants.

Member Emily Dexter said she had four areas of concern she hoped were shared: “segregation” at Cambridge Rindge and Latin School, the city’s high school, through separation of honors and advanced placement classes from so-called “college prep” classes that resulted in streams with significant racial division; the increasing loss of students to charter schools; increasing issues with classroom behavior in the elementary schools; and poor communication with city councillors at budget time, referring to the council’s resistance to pass the committee budget “with confidence” in the past couple of years.

Budget subcommittee co-chairman Richard Harding focused on the achievement gap, also using the language of desegregation. “For my money it is very clear that there is an issue here. I don’t know the remedy. But I look for some solution that may have some budgetary impact. It’s time to have the conversation to desegregate CRLS classrooms,” he said, asking also to see plans to return CRLS to top-level status in the eyes of the state as judged on standardized test scores. This fall’s data lowered the high school to Level 2, along with the Morse and King elementary schools and Rindge Avenue Upper School.

Harding also made it clear that he wants “no surprises” with the budget – if there are cuts coming to close the budget gap, he wants to hear sooner rather than later.

Harding agreed, saying, “I’m still in flux about what exactly our community engagement plan is.”

Budget subcommittee co-chairwoman Kathleen Kelly expressed concern about “the level of student anxiety starting very early” and stressed the need to fully integrate general and special education. “Social-emotional learning is not just the bailiwick of the Office of Student Services,” she said. “We need to lift up kindergarten play and creativity into all grades.” In addition, she wanted to see progress and proof that the district was “fully engaging students in a culturally relevant curriculum.”

Member Patty Nolan asked for an analysis of the current year’s initiatives – a document the school department provided the committee last year that showed the status of prior budget initiatives. Members also agreed that they would begin discussing what they are hearing from the public at budget hearings at the next budget meeting.

Members also parsed the budget guidelines they provide to the superintendent and his staff, which are intentionally broad and non-specific. As Harding often says – and repeated Tuesday – “they are not initiatives, they are not goals, they are tools for guiding work at a high altitude.”

With members having agreed to use last year’s guidelines as a launching point, Kelly has been editing the document to incorporate their comments. There were a few more discussions Tuesday, such as charging that the district would develop its own measures of standards; last year the language said the district would “begin to develop” standards.

The committee budget guidelines, however, continued to include requests for world language options until last year, when that language was dropped.

Harding, acknowledging that “Nolan may have plenty of support among her colleagues” for elementary school world language instruction, pushed back against putting it back into budget guidelines, suggesting it is more a “goal” or an “initiative.”

Vice chairman Fred Fantini, as he has at each meeting this winter, reminded that a gap of millions of dollars remained, and “I don’t want to ratchet up expectations and them have them shot down.”

“We understand the money situation,” Harding said. “But we need to have these programmatic discussions.”

Kelly is doing one more revision, and the new guidelines will be released later this week.

There was a presentation at the budget roundtable that many committee members found puzzling: Assistant Superintendent for Curriculum and Instruction Jessica Huizenga made a proposal to combine the math and science departments into a STEM (Science, Technology, Engineering and Math) department.

She reminded committee member that when the head of the district math department left for a new job in the spring of 2014, the school department was “unable to find a new one” and in the interim had science department head Lisa Scolaro run both. Now, working with a Worcester Polytechnic Institute project to explore integrating the four disciplines in schools, they are proposing that “over the next decade we bring STEM education to CPS.”

The immediate proposal is to restructure the departments into one to be led by a STEM director with an assistant – using the current head of science position and filling the still-held head of math position. This would allow for “the end of siloing” of the disciplines, and make sure that the department was led by people with both math and science expertise. This structure, said Huizenga, would be budget-neutral.

“Why is this at a budget meeting?” Harding asked. “I understand you want to do big things, but given that it is budget-neutral, why now?”

Young said it was preliminary, but if the committee was receptive – although it has no immediate budget ramifications – “we will advance it through the budget.”

Huizenga stressed that this interdisciplinary approach would allow for “authentic, hands-on, project-based learning” that would be “exciting and engaging,” and quoted Bureau of Labor department statistics showing the strength of STEM jobs.

Harding reminded members later that the budget they are preparing now will be the first budget for a new superintendent, and the committee further wondered: what was known of the effectiveness of the interim model, without the math head; how technology and engineering would be folded in; what would happen to the high school’s vocational education department; whether “math teachers” and “science teachers” would be replaced by “STEM teachers” and how that would work; whether current teachers were weighing in on the proposal; how it would change curriculum; at what grade levels it would be implemented; whether it would be a benefit to the students; and whether it has been tested anywhere, including at colleges,

“I am going to want to see programs that speak to … reaching out to the students that are underperforming,” Simmons said. “We come up with these crisp ideas and, before one takes hold, we are off to the new thing. How are we going to make sure that all children get the same opportunity at what we are launching? That should not be two separate conversations, but one conversation.”

With Harding and other reiterating that this was a project they could evaluate at another time, Young requested that any further questions from members be forwarded in writing to the administration.