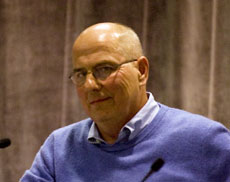 The public schools budget season kicked off officially Tuesday with a School Committee “retreat,” where committee members heard initial estimates of nearly $5 million more in proposed spending than there is likely to be funding in the coming fiscal year. Administration members, however, signaled cautious optimism that although the gap is relatively high, they will be able to bring the numbers closer.

In the administration’s estimates of likely costs and revenues, a proposed “maintenance” budget with no new initiatives for the 2017 fiscal year is $174.7 million. That’s an increase of $10.9 million, or 6.6 percent, over the current year. With preliminary estimates of revenues – primarily from property taxes – up by just 3.6 percent, the first-cut shortfall is $4.9 million. That gap will have to disappear by the time the committee approves a final, balanced budget this spring, and any budget additions will need to be accompanied by new revenues or cuts. 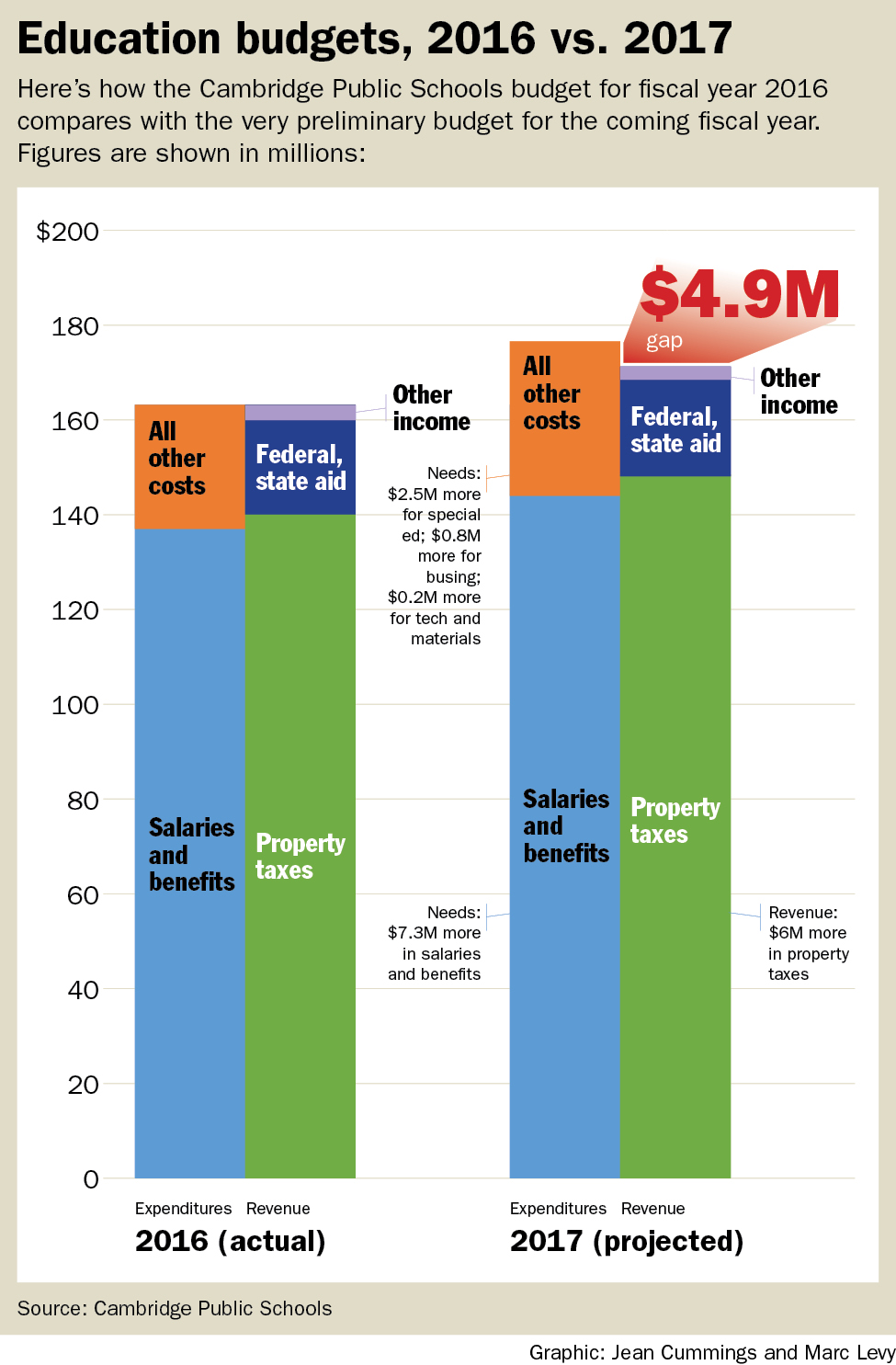 The next steps for the administration are refining estimates, including working with principals and administrators to look more closely at operating budgets. “I tend to be a little bit conservative initially in estimates,” district Chief Financial Officer Claire Spinner explained in her presentation to committee members – meaning she regularly overestimates some costs.

The administration is also “continuing to work very closely with the city on this,” Spinner said, referring to refining estimates for property tax revenues and other miscellaneous sources of income for the school budget. “They are very committed to working collaboratively with us to make sure we have a balanced budget.”

“Even though we are calling out this budget gap,” Superintendent Jeffrey Young said, “it is no big surprise. We are in command of this. It’s a tough budget year, but it doesn’t come out of the blue.” The $4.9 million preliminary gap is the largest in several years; in the past five years the gap at this early stage has ranged from $2.7 million to zero.

Salary. Staffing accounts for more than 80 percent of the total school budget, and this year’s projection show salaries and benefits increasing by $7.3 million – including contractual salary “step” and cost-of-living increases for permanent staff. In the past six years, salaries and benefits have risen about $6 million annually, with only 2012 significantly lower.

A little more than $1 million of staff-related increases is from projected enrollment growth of 155, to a total 6,926 students: one new second-grade classroom, two special education classrooms, an additional specialist teacher and more paraprofessional hours, as well as increased costs for substitute teachers and reserve teacher and aide positions.

Total enrollment has been rising steadily, recovering from a significant drop in the early 2000s but not yet at pre-2000 levels. A jump in birth rates in the past few years has driven kindergarten enrollment growth, and the high school has attracted more students to the district: This year, Spinner’s numbers show, there were about 130 more ninth-graders than there were eighth-graders last year. And despite the total expected growth in enrollment for next year for elementary and high schools, the upper schools are staying effectively the same size.

Member Patty Nolan responded to the figures. “To maintain the same class size in the high schools with the increase of students,” Nolan said, “we will probably need to add a couple of more teachers at CRLS. Has that been mentioned in discussions?”

Agreeing that “our objective is to keep class size favorable,” Young said it was “premature” to say staff would be added, and pointed out that in the past couple of years class sizes had been improved through schedule changes. There will also be no “wholesale change” to the current teacher coaching model, Deputy Superintendent Carolyn Turk said.

Other costs. Perhaps the most significant impact on the budget comes from unusual increases in transportation and special education costs. Typically in the past six years, non-staff-related annual increases were $1 million or less, sometimes effectively zero. This year’s proposed increase is a relatively whopping $3.5 million.

Out-of-district special education tuitions and special education-related contract services could bring a total increase of $2.5 million. There has been no significant increase in these costs since 2014; in 2013, the school department chocked up a half-million dollars savings in this area, explained as success in providing more services in district, notably through the creation of an autism program.

Assistant Superintendent for Student Services Victoria Greer has said that out-of-district and special education costs have been rising not so much because of an increase in the numbers of students needing services, but because of many students’ increasing intensity of need. There has been an increase in students going out of district – from a low last year of 139 to next year’s projected 171 students – the table shows the percentage of students with special needs over the past few years as fairly consistent. 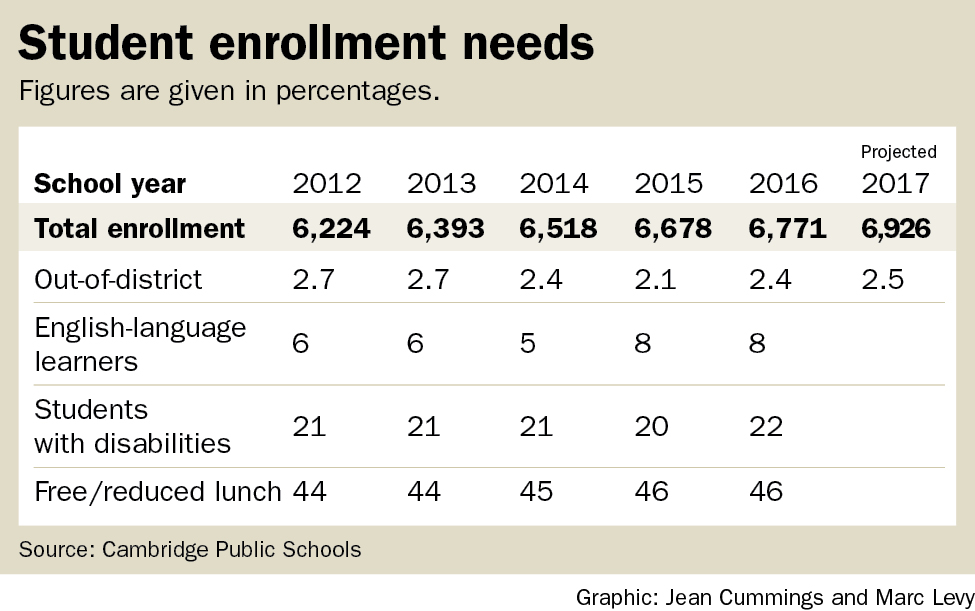 Greer said she will be making a presentation to the committee at the Feb. 2 regular meeting with more information about the department’s needs and resources.

State and federal grants and miscellaneous resources are expected to stay level at $22.5 million and $1.6 million, respectively. But it’s property taxes that account for 86 percent of school funding – including the cost of charter schools. Property taxes are expected to rise 5 percent, said Spinner, but because the expected net cost to the city for the charter school students is about $1 million, it leaves the school department a 3.7 percent increase, or the remaining $6 million.

Vice chairman Fred Fantini took note, saying “We probably need to get a strategy to getting more kids out of the charter schools and back into the public schools.”

Discussion with the committee focused mostly on clarifying questions. Fantini seemed intent on getting across the message that “I suspect there is no room for new additions in the budget.” Sometimes saying he was asking “for the benefit of the new members” – Manikka Bowman and Emily Dexter – he also asked for more information on the capital budget and the debt budget supporting facilities and new buildings. Spinner’s report includes $1.4 million the past two years for school maintenance projects, and another $4.5 million next year, which will include a new roof for the Kennedy-Longfellow building. She’s also expecting $130 million in bond issues to pay for the new King Open/Cambridge Street Upper School building on top of the $197 million in existing school building debts.

“I think the School Committee has been responsible for managing budgets,” Fantini said. “I’m convinced we are able to build the new schools because we manage in a good way.” He asked for reports on how many positions have been added to the schools over the years – “60?” – and on pension and benefits to staff. New member Dexter in particular campaigned with a promise to push for more teachers and aides in classrooms. Late in the meeting she expressed support for fully staffing the Responsive to Intervention student support program and K-8 world language.

The other new member, Bowman, asked the $4.9 million question: “How do we measure the impact of the budget that we ask for? How do we look at the impact of our investments in terms of what’s working or not working? How do we justify meeting the gaps?”

“Each year we look at our priorities,” Young replied, quoting a principle he said he uses regularly. “We ask, ‘If you are not already doing it, would you choose to begin it today?’ If the answer is ‘yes,’ then we strengthen it. If ‘no,’ then we should get rid of it and put it out of its misery.”

Budget subcommittee co-chairs Richard Harding and Kathleen Kelly went over a draft schedule for the rest of the budget season – including snow dates to ward off the problems of last winter’s oft-canceled meetings and hearings. The superintendent is expected to present his budget at the March 15 committee meeting, with the committee adopting a budget in early April.

This story was updated Jan. 17, 2016, to remove an incorrect reference to a $143 million budget proposal and reflect goals of member Emily Dexter.