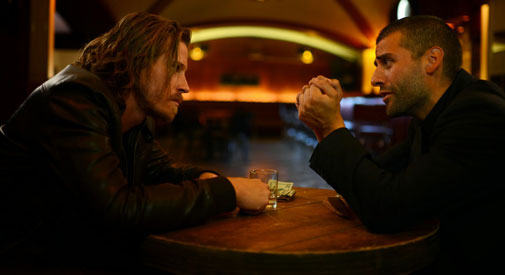 Taciturn dudes with too much time and money lie at the heart of William Monahan’s bristling neo-noir “Mojave,” chock full of mano y mano bravado and smug self-indulgence. It begins with a Kurt Cobain-looking burnout named Thomas (Garrett Hedlund) talking into the camera about how he’s been famous since he was 19. We don’t know exactly what he does, just that he’s a hot Hollywood property – and once we see his spread, we know he’s bona fide as well as disconnected and full of turmoil. 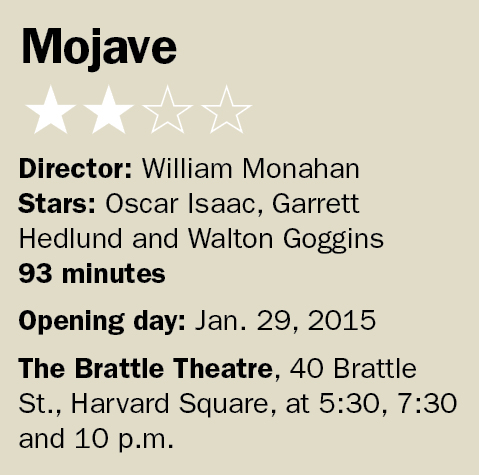 He hops in a jeep, heads into the desert of the title and, after recklessly flipping the vehicle, gets stinking drunk by a campfire in the middle of the sandy nowhere. He shouts at imaginary foes beyond the arc of the campfire light – and eventually a scruffy soul looking like a young Dylan (apt, as he’s played by Oscar Isaac from “Inside Llewyn Davis”) emerges, spouting metaphysical psychobabble. There’s plenty of edginess between the pair, and a rifle too, but the first one to get popped is an unwary park ranger. From there it’s the desert hillbilly after the uptown guy as the action moves from the sea of sand to the vacant throughways of Tinseltown. It’s a zany game of cat and mouse, and at times you wonder if we’re not heading into some existential “Fight Club” where what’s real and alter-reality is the sweet seesaw of the film.

Monahan, who penned “The Departed” and clearly knows a thing or two about men being men, gets a little lost here. The character of Thomas comes off as shadowy and shallow, and given all his privilege and loathing, he’s not that likable. Neither is Isaac’s Jack, for that matter, but at least he’s somewhat complex – and played by Isaac, along with the likes of Hardy, Fassbender and DiCaprio one of the most compelling actors working today. If the sullen thespian’s slow simmer into madness set you on your heels in “Ex Machina,” this is some of the same, but far more mercurial and hyperbolic. And a wasted effort, too. Perhaps Monahan the director is not the same storyteller as his scripting side; what he misses here is giving us a reason to care. The fact that Jack goes from oasis curio to something much darker and foreboding and that Thomas has a wife works as a pat thriller, but Monahan clearly aspired to something more.

The roots of deconstructing Hollywood and the cancerous underbelly of privilege and fame hang there but never quite connect in a meaningful way. Some sizzle comes from the dialogue, Mark Wahlberg as a coke-snorting producer, ever in his bathrobe, and Walton Goggins as part of the entourage, but “Mojave” ultimately becomes a hot mess of selfish ids trying to own the order of the universe. Does anyone really care about a macho pissing contest if it tales place in the desert?