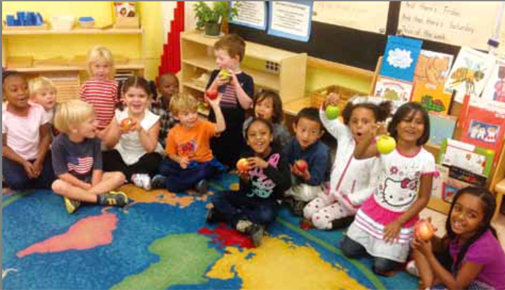 World language for elementary students was taken up by the School Committee – again – at Tuesday’s meeting, this time with a vote directing the administration to create a “model” for introducing a world language program to begin in the 2017-18 school year.

It’s the latest stab over five years at making foreign language instruction available for all students in kindergarten through fifth grade. Co-sponsored by Richard Harding and Kathleen Kelly, the motion asks for “curriculum and program structure” to be presented to the committee “no later than the first meeting of December.”

Member Patty Nolan, who co-sponsored a similar motion exactly two years ago, wondered how “to make sure that whatever report comes out can actually be implemented” the next year, and asked if the motion makers had considered starting a pilot program for the upcoming school year.

“We discussed this with [Assistant Superintendent for Elementary Education] Maryann MacDonald and others about what would be reasonable,” Kelly said. The arrival of new superintendent Kenneth Salim in June, given that it is already March, she said, was “a reason for pushing it off” to the end of the year.

“We are really looking for this to come about,” Kelly added. “We are looking for a model and a structure, not just a discussion about it.”

The absence of foreign language instruction in most city elementary schools has been a heated topic since the 2011 announcement of the Innovation Agenda, which changed the landscape by creating middle schools but curtailed forays into elementary foreign language with the promise of a citywide program.

Pointing out that existing foreign language classes cobbled together by several of the original K-8 schools were “more cooking and culture” than language instruction, Superintendent Jeffrey Young included the development of a “comprehensive plan” among his 2011 strategic objectives.

The Innovation Agenda included Spanish, French or Mandarin instruction in the four upper schools that opened in September 2012. (Initially, sixth graders rotated through languages available in their schools and did not begin learning a chosen language in earnest until seventh grade; that approach was adjusted the second year to allow classes to begin in sixth grade.)

The promise to review and plan a universal elementary school foreign language program was scheduled to take place during the first year of the Innovation Agenda, then put off by administrators until the following year.

With the 2014-15 budget, elementary world language education officially fell off of the administration’s agenda when the superintendent announced that without a longer school day, it couldn’t be done without eliminating other programs. That year, the Fletcher Maynard Academy – one of only two with an extended day, the other being the Dr. Martin Luther King Jr. School – launched a Spanish instruction program for all students.

Young has acknowledged that this is a “broken promise” of the Innovation Agenda that has frustrated parents and committee members.

Families, including those whose children are in immersion programs, plead regularly for increased world language programs during public comment, particularly around budget time. Several people have provided data from studies indicating that early instruction in foreign language not only creates “world citizens” but also increases student literacy in English and engagement in school.

Committee members have added their voices, not only in motions but in frequent calls for progress. Along with Nolan, former member Mervan Osborne was a strong advocate for universal foreign language beginning in kindergarten. Calling it the “giant pink elephant” in the room during a January 2015 meeting, Osborne bemoaned that “to back away from it says something about how we feel about progress, nationally and internationally. It’s part of who we are, a part of our community.”

Committee members also regularly included a request for “the superintendent [to] provide options for implementing world language in the elementary program, taking into account the limits of a six-hour school day” in their budget guidelines, until dropping the language in the current year’s budget.

Young has pointed repeatedly to the “increased time commitment required” for literacy and math instruction, as well as the “implementation of new state science standards,” as he wrote in the budget for the 2015 fiscal year, as reasons foreign language instruction cannot fit into the school day. Members have pointed out that other districts with six-hour days have fit in world language, and that “required” time commitments are often district-determined.

Dexter is among the committee members and parents who have pointed out that while the administration says that amount of time is prohibitive for foreign language instruction in non-extended day schools, the district has rolled out a Kodaly music program without apparent complications. Kodaly is a pedagogical approach to music instruction that among other elements includes extended instruction; like foreign language, it requires special training and instructor expertise.

At the Morse School, for example, kindergarten through second-graders take four half-hour music classes per week – a total of 120 minutes. For non-Kodaly schools, music is taught once a week for 45 minutes. This additional 75 minutes per week of music class for Morse students compares with the 60 to 90 minutes of Spanish taken by Fletcher Maynard kindergarten through second-graders.

Member Fred Fantini, a strong advocate of the music program, has said that Kodaly is “almost like a foreign language of its own,” and has noted the similarities in claims that it increases overall literacy and academic engagement to the claims of foreign language supporters.

A February 2015 request signed by 32 Baldwin parents asked, unsuccessfully, that they be allowed to “reintroduce” Spanish instruction via a pilot program in the current school year. (Baldwin had been offering some Spanish starting in the second grade before the implementation of the Innovation Agenda precluded schools from shifting money into language instruction.) They referred to the ability of six-hour day schools to add the Kodaly program as one justification.

“We understood during the budget [hearings] that people wanted to talk about” world language, Harding said, “but the truth is that do to this the right way, we needed to give [the administration] time … I think we should call this an ‘action plan’ and also give the new superintendent time” to incorporate it.

The committee’s desire to have universal world language was raised with all of the superintendent candidates, Harding added.

“It’s perplexing to me as to … why this has caused so much heartache,” Dexter said. “We put together four middle schools and total curriculum in 18 months. We are talking about one small part of the curriculum.” In asking for the consideration of a pilot program to begin in the next school year, she noted that Cambridge is “at risk of losing the middle class” and is losing people to charter schools, and that the incoming superintendent “would be able to get a lot more information from a pilot.”

“I’m glad we are having this conversation,” member Manikka Bowman said. “I want to be intentional about ensuring that as we bring in the conversation of kids from lower socio-economic social backgrounds and kids that have been impacted by the achievement gap we always lift those students up. I want us to do the due diligence … for me to make a really sound decision around this, I really want to know what’s the academic impact” if other things need to be taken out of the school day.

“Thank you, Ms. Bowman,” Harding said. “You’ve captured the spirit of where we were going with this process.”

Saying that the intent is to “tailor-make” a plan that works well for all and fits into broader curriculum goals, Harding said, “Maybe we fit it into our day like Brookline does. Maybe we find that we need a longer day.”