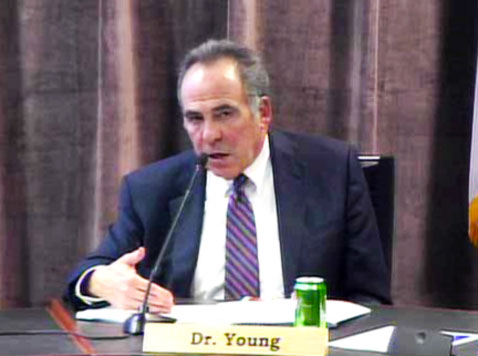 Superintendent Jeffrey Young discusses a district budget with the School Committee on Tuesday.

Pointing to massive changes under way at Cambridge public schools and the fact the city has the shortest school day in the state, Superintendent Jeffrey Young asked Tuesday for the School Committee to give him no new demands for the budget being created for fiscal year 2014 – a budget that still needs $1.4 million in trims.

“Please, School Committee members and community members: Please, let us breathe, let us get stable, let us work through the change. Please, I implore you, please let us do what we need to do to get things right before we move on to starting new things,” Young said toward the end of an hourlong presentation on the district’s $150.9 million budget, a $6 million or 4.1 percent increase over the current fiscal year that began $2.3 million in the red before the city stepped up in late January with more money. He went on:

Young was hired in April 2009 to replace Thomas Fowler-Finn, who was remembered as a top-down manager with a harsh touch and got only a one-year extension to his contract before he decided to leave. For Young’s contract renewal vote in June 2011, committee members didn’t even need to go into closed-door session before giving him a unanimous three-year extension to July 5, 2015.

“The reason we are seeking to strengthen and refine rather than add more is because we are still in the midst of what is arguably the greatest change and transformation this district has ever undertaken, and the dust from that does not settle in five months or six months. Anyone who thinks it does is is deluding themselves,” Young said. “Most, maybe all of those things programs people want to add are good and worthy. This is not about the content.”

Rather than help cut $1.4 million – which is to come from administrative efficiencies rather than the classroom – the programs people wanted for the district could easily add as much as $8 million to the budget, Young said. “There are no shortage of good ideas in Cambridge.”

But there were even more reasons to hold off on a few of them, he said:

While money is proposed for hiring a program evaluator, he would wait to hear that evaluator’s take on co-teaching in sixth-grade classrooms before expanding the two-teacher model to English and math in the seventh and eighth grades. “The data are not there, [and] what you said in the past is that we ought to evaluate programs before we expand them,” Young told committee members.

Big changes at the high school, Cambridge Rindge & Latin, seemed badly timed in this budget because the school is going through an accreditation process with a New England Association of Schools and Colleges team that wouldn’t have even a draft report until the summer or final recommendations until the fall. “I’m not putting anything in the budget yet because I don’t want to anticipate what that’s going to be,” Young said. “Come fiscal ’15 and we know what they’ve recommended and you’ll hear from me about how we want to strengthen the high school.”

Similarly, as much as Young said he wanted to improve science education, he was conscious that science standards are being revamped at the state level (and that Cambridge is part of a White House Office of Science and Technology Policy technology pilot program). “We’re not putting into the budget today thousands of dollars for microscopes because I don’t even know yet what microscopes to buy,” he said. “We’re waiting for the standards … come the fiscal ’15 budget, expect something from me.”

The same reasoning was applied to adding library staff, which he resisted when “I believe we are on the cusp of inventing” library media standards for the 21st century – another likely task for the program evaluator.

Not enough minutes in the day 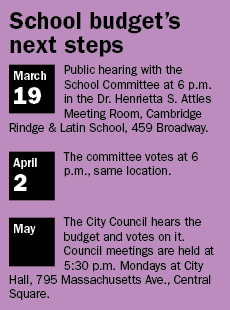 Perhaps the most significant program delay Young requested was for elementary school world language classes, and he laid it largely on having “the shortest school day in the state” – another aspect of the Cambridge district that dates back generations and is the topic of negotiation between the district and the Cambridge Education Association.

The elementary school week is 1,800 minutes, or 360 minutes a day, with 600 minutes a week going to English-language arts based on the recommendation of Cambridge’s longtime partner in the field, Lesley University (whose experts wish Cambridge gave the skills even more time); 350 minutes for math (a standard, but 20 minutes short of Boston’s schedule); from 120 to 195 minutes for science, depending on the grade; 90 minutes for physical education; 45 minutes each for art, health and library, media and technology skills; 100 for homeroom; and 250 for lunch and recess – a total, Young noted, of 1,840 minutes.

“We already do not have enough time to do what we need to do. How does world language fit into this?” he asked.

But although committee members still urged that the district find $30,000 for varsity athletics coaches and look at a potentially cost-neutral way to add librarians (by losing library aides), it was world language that got the most pushback.

“It was a promise we made in the Innovation Agenda,” member Richard Harding said.

“I believe this is a broken promise,” Marc McGovern said. “People in the community have said that, and I agree with it. Mr. Superintendent, in a letter to us you acknowledged that, but I didn’t hear you acknowledge that tonight. We should say that publicly –”

“It affects trust in the community,” McGovern said. “I don’t think you go ahead and do it if it’s not feasible just because you said you’d do it. Maybe it was too early of a promise to make … but this is all about priorities, and if we thought that world language was going to be the linchpin that could get us to close the achievement gap and push us from good to great, we’d find $600,000 … We have a right as a School Committee to override [your decision], we have the right to send this back and say, ‘We don’t care, do it.’”

Knowing Young and other district teachers and educators opposed rushing into world language, he said, “I hesitate to do that” – especially after Young’s warning that poorly implemented world language courses for kids usually wind up being reduced to “the four Cs” of costumes, customs, cooking, celebrations.

But not every committee member agreed. Alice Turkel – the only member to vote against the Innovation Agenda, and who said Tuesday that despite pushing now for its success, “If I could undo it, I’d undo it in a minute” – said that whatever the pressures of the budget, world language classes should still be created for fourth- and fifth-graders. Mervan Osborne seemed for a moment to be backing her, before saying that “you’ll be sure that for fiscal year 2015 this will be a focus from the start … we’re committed to it.”

Harding and Patty Nolan were willing to back even farther away, with Nolan saying, “we want to see this yesterday, we think it’s a really good thing to do … but I don’t hear at all that we’re ready to do a quality program. And frankly, I’m going to say it: We’ve had some pretty crappy programs in the past. Given that, I would not support forcing any kind of change so that we have to start it next year. We do have to figure out how we make good on the promise eventually, and eventually doesn’t mean 10 years from now.”

Young put the attention back on a longer school day, saying that “when we get that extra time, world language is the priority.” 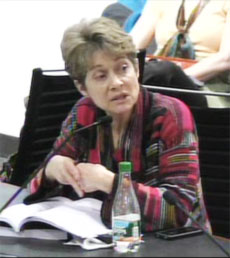 It was clear Tuesday that Young’s nerves have frayed over the months, and he said angrily in wrapping up his budget presentation that it was “inflammatory and disrespectful” for people to draw negative conclusions about such things as staffing from misinterpretations of the budget instead of asking what figures meant. Nolan, though, pointed to budget-book figures that showed clearly that staffing was going down.

The reason: Proposed figures for the next fiscal year are shown next to adopted budget and staffing figures from the current year. But, district Chief Financial Officer Claire Spinner told the committee, the adopted figures changed as needed “almost from the minute you voted” as the realities of the Innovation Agenda were recognized – and those operational figures aren’t shown in the budget book.

Even after administrators find $1.4 million in savings from administrative staff reductions (in human resources, accounting and purchasing and the superintendent’s own office), facilities maintenance and efficiencies in the food services program, there are still risks to the district’s budget. Spinner said the most at-risk revenue sources were $2.5 million in Individuals with Disabilities Education Act funding and Title I money, which helps low-income families but has been dropping for three or four year. The looming forced budget cuts called “sequestration” could end the Title I funds completely.

State aid is also a question mark, but City Manager Robert W. Healy has traditionally made up for losses in state aid from the city budget, McGovern noted.

“But this is much larger,” McGovern said. “We could be looking at millions of dollars we need to make up.”

A public hearing on the budget is scheduled for Tuesday. The committee votes on it April 2, and the City Council hears and votes on it in May.