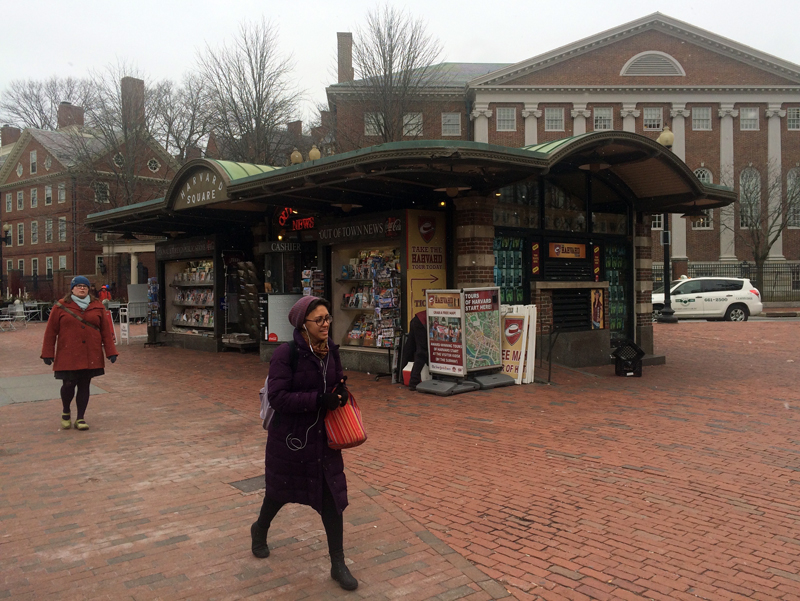 When the contract for the Out of Town News ends, the 1928 structure holding it in Harvard Square is due to be converted to a more public use. (Photo: Marc Levy)

Suspicion over how much involvement the public would have over a revamp of the iconic Out of Town News kiosk and surrounding Harvard Square plaza has briefly derailed a vote to create a working group and partnership to oversee the public space.

The structure, which dates back to 1928 as a subway entrance and to 1984 – after a slight relocation – as a newsstand, is owned by the city and has been envisioned as hosting a variety of uses, including as an information center, after the current tenant’s lease runs out at the end of the year and the plaza gets new landscaping and is made accessible to the disabled.

A rough price has already been put on work at the area at the heart of Harvard Square, a mix of city and MBTA space: $4 million, split between each of the budget processes for the next two fiscal years. The figure was arrived at even before the start of a study of the property for which the City Council set aside $600,000 – misidentified in a council order last week as a $500,000 study.

This is a “train running,” councillor Dennis Carlone said at the Monday meeting. “It seems to me the study group has to happen first, not after the money is committed. It seems like the cart before the horse … That’s a lot of money if the study doesn’t make sense. This is complicated, and the money’s already lined up.”

Carlone used his councillor’s “charter right” to delay a vote until the council’s March 14 meeting, meaning the formation of the working group and city partnership with the Harvard Square Business Association would happen only after that organization’s annual meeting, which took place Friday – the group’s 106th, referred to by councillor David Maher as one argument for passing the order without delay. “This is somewhat timely,” Maher said, noting also that the council was preparing to go through its budget for the 2017 fiscal year and, while much work has been done already, “there is a lot of work that continues to need to be done.”

“If the order is to form a study group to study the potential of the kiosk, even based on what’s been stated today, I have no problem with that,” Carlone said, clarifying that it was some of the wording in the order co-sponsored by Maher, councillors Leland Cheung and Marc McGovern and Mayor E. Denise Simmons that set off alarm bells. He cited part of the order that said the city’s partnership with the HSBA would “thoughtfully and purposefully continue efforts to support and promote commerce.”

“I don’t see ‘history of the city,’ I don’t see ‘visitors center’ there, I see ‘support commerce,’” Carlone said. “I heard the center might be rented out, that is not in the report. The tone of this seems loaded toward totally commercially oriented development. I’m not sure that’s right.”

“How does the public get involved? … What are the components of the committee? I don’t see residents mentioned here, but I do see all the other groups mentioned. I’m sure that was intended, but it’s not in the order,” Carlone said.

That echoed the interpretations of two members of the public who have expressed repeated concerns about Harvard Square development in recent years. James Williamson spoke during public comment to remind councillors that the Harvard Square Business Association didn’t represent the residents, and he said it didn’t “represent well all the business people”; Pebble Gifford arrived in the council’s Sullivan Chamber just after public comment closed, but said later that her message would have been that the partnership was “disturbing” because the association largely represented the interests of John P. DiGiovanni of Trinity Property Management, a major leaser of commercial space in the square as well as president of the group.

The association has proven itself over the years to be open to public engagement and input, Cheung said, and its model for the kiosk and plaza was “not going to be commercial … they want it to be a part of Harvard Square people remember and love.”

“There is no better partner,” Cheung said of the association.

The sponsors of the bill and Denise Jillson, executive director of the association, pointed to extensive public involvement that has taken place already, including community meetings at the Starbucks coffee shop overlooking the plaza and Harvard University’s neighboring Smith Campus Center. And they assured skeptics there would be more.

“I would assume there would be representatives for residents along with the Community Development Department and probably leadership of the HSBA and Cambridge Office of Tourism. I don’t expect the MBTA [to be involved], but it’s not outside the realm of possibility,” Jillson said, noting that conversation about the rehab has been going on since 2006. “I don’t think there is ultimately going to be another whole public process, because there’s just been so much public process around this already – and I’m not saying there won’t be more, of course there will be more, but I think a lot has already been done.”

Maher said his expectation of the working group added academia to the mix. “I believe what really the intent of this order was is that, while the engineering study moves forward, there can be a working group that is looking at this and saying, ‘How we do envision what this can become, how do we see the structure and the management of this area?,’” Maher said. “It’s really a joint responsibility, and I think the association is saying they would like to play a key role in this along with the city, and conceivably the universities.”

Councillor Nadeem Mazen hoped the council would have its own committee process about goals for the plaza, calling it unusual “that we’re sending this to a task force or study group with a lot of ideas pretty well baked,” but Maher thought it would be even more unusual for the council to be involved in the design “in a way that is any different than any other project we take up. We appropriate and we hear the arguments for and against, but this is something our Community Development Department and Department of Public Works will be vetting.”

The $600,000 contract is being managed by the Department of Public Works as two components, with Harvard Square’s own Galante Architecture Studio working on kiosk design and HDR and Halvorsen Design Partnership working on plaza engineering and landscaping, respectively, said Iram Farooq, assistant city manager for community development.

“It’s very early stage,” Farooq said of the dual studies. “The final design should be able to accommodate a broad set of uses, but we think there’s maybe a little bit more targeting that can be done … and I think it’s obviously a good idea to have public engagement throughout the process.” 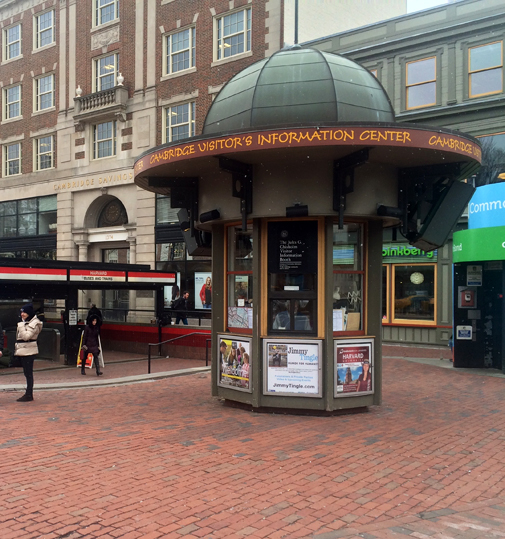 Harvard Square’s visitor information booth could be eliminated and its services moved inside the Out of Town News kiosk. (Photo: Marc Levy)

The end result is likely to look much like the current kiosk and plaza, because of the historic and protected nature of the structure and because just below the brick of the square is MBTA train tunnel, Jillson said, making it a “challenging, complicated piece of land.”

She was clearly eager to see plans put in place, in part because she found the sales of cigarettes and lottery tickets at the existing newsstand a less than ideal use in the square’s “most beloved structure” and because the building hasn’t been repaired since the 1980s. “Every year it just deteriorates more. It’s a public building, and it’s disconcerting that there hasn’t been any work done,” she said.

Putting the kiosk to better use could also mean a more congenial, less cramped workplace for the volunteers that sit in the nearby tourist information stand. Its elimination could open up more of the plaza for other uses, but “we won’t go in willy-nilly to change things,” Jillson said. “The most important thing is to be respectful of the things everybody loves.”

Shortly before Carlone used his charter right, councillor Kelley expressed dismay over debate arising suddenly despite the $4.6 million plan laid out in the budget book after an adoption process several months ago.

“If you think the budget process is so good that we can break down each one of the thousands of developments, I give you a lot more credit than I give myself,” Carlone said. “You can say I’m confused and I’m not reading the budget, but the truth is, there isn’t enough information here … Sure it’s in the budget. There’s thousands of things in the budget.”