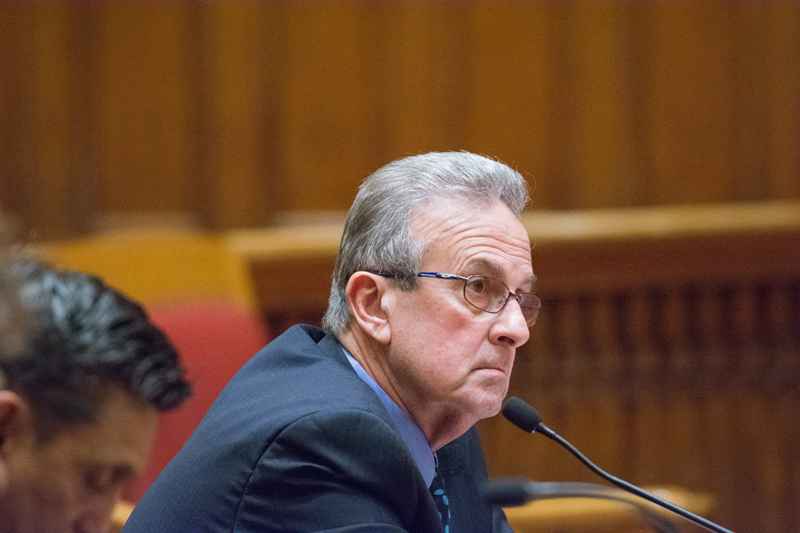 Has worked for the city for 45 years, as city manager for three
By John Hawkinson and Marc Levy

City Manager Richard C. Rossi will not seek an extension of his term beyond June 30, he announced to the City Council this morning at an 11 a.m. meeting of the City Council’s Government Operations Committee.

The hourlong meeting, which began with Rossi reading tearfully from a prepared statement, transitioned into a ceremonial one, with councillors, staff and members of the public expressing appreciation for Rossi and his service.

Rossi had been deputy city manager since 1981 under City Manager Robert W. Healy, and was given a three-year contract beginning when Healy retired in 2013 after 32 years overseeing Cambridge’s government operations. He had also served as purchasing agent, acting commissioner of Public Works and acting director of the Water Department as well as the years as deputy city manager.

“Becoming city manager is a dream come true for me,” Rossi said upon his appointment in late December 2012. “To be able to do the job we do in the city, it takes a lot of time. And when you have a family that pats you on the back and says ‘We know you love doing this, so go ahead,’ that’s important. I’m blessed. I’m a lucky man.”

Rossi, 69, grew up in Cambridge but lives in Watertown. His speech and those of others emphasized the importance of family, and that Rossi’s decision will allow him to spend time with his family: a wife, Jane, children and grandchildren.

He would be willing to give additional time working on an orderly transition, Rossi said. 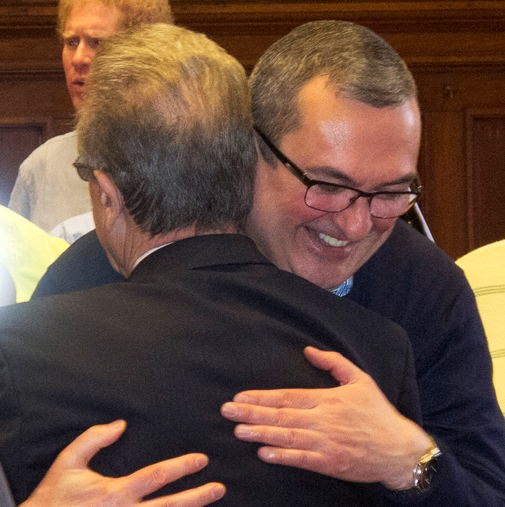 At the close of the Friday meeting, councillor David Maher, chairman of the committee, said the selection process for a new city manager would begin in earnest at a meeting on March 23, when timelines would be discussed.

Maher said that he was “committed to having an open process,” even though “in my understanding, there has never been an open search for a city manager in the 75 years of our form of government.”

“There is no template to look at,” Maher said.

Maher said that many of the process meetings would take place during the business day while staff were present, but that any meetings with candidates or about their selection would take place at the times convenient to the public.

Rossi’s leave-taking means the council must return to a replacement process it essentially avoided three years ago – first promising short- and long-term examinations of the role and candidates, then moving directly to the choice of promoting Rossi.

His promotion was approved by the council in an 8-1 vote after much comment from surprised residents and even officials, considering that in the previous spring councillors backed an extension of Healy’s contract because it would give them time for those short- and long-term succession plans. As recently as that November councillors had been still talking about those plans without mention of Rossi’s promotion – beyond the likelihood Rossi would be a strong candidate for the job.

Suddenly Dec. 3, 2012, with little progress made in five meetings of Maher’s committee, six councillors proposed Rossi’s promotion and the panel switched gears to craft a contract.

Councillor Craig Kelley, who was the sole “no” vote on Rossi’s contract, had asked to begin a process for handling the retirement of Healy as far back as December 2010, but fellow councillors responded with hostility. Kelley said in reference to the sudden vote on Rossi’s contact: “That we’re here is extremely bothersome to me. It’s a question of us doing or not doing our jobs, and we did not. We abjectly failed … frankly, I’m embarrassed.”

During his most recent campaign for reelection, Kelley said he would enthusiastically back Rossi for another term.

Rossi’s office released a statement about the decision shortly after his announcement. In it, Lee Gianetti, director of communications and community relations, said that Rossi’s tenure had focused on “building a core leadership team and creating bold initiatives focused on sustainability efforts, economic development, early childhood and STEAM education, fiscal management – including maintaining the city’s three AAA bond ratings, affordable housing and strengthening Cambridge’s ongoing commitment to our diverse population.” Additionally, he said, Rossi has worked to forge collaborative relationships with residents, business and community groups. 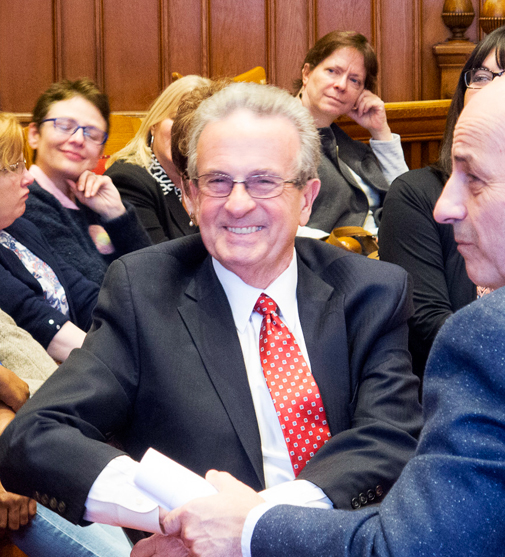 Rossi’s statement to the councillors on Friday:

“After lengthy discussions with my family, I have decided not to seek an extension of my contract as Cambridge city manager.

“This has been a very difficult decision for me. I want to thank the City Council for the opportunity to lead this incredible city, about which I care very deeply. Your faith in me and your support over the last three years have been greatly appreciated, and it has been a true honor and privilege for me to serve as city manager.

“For the past 45 years, I have worked to improve our community and I have enjoyed every minute of it. As someone who grew up and went to public school in Cambridge, I am so proud that I have been able to play a role in helping my city – our city – become the great city that it is today. Of course it has been challenging at times, but the work of the last three years has been rewarding, and I believe that we have made positive steps toward shaping the future for both residents and businesses.

“As I begin preparing to leave, I want you to know that I am extremely proud of our employees, in particular the strong leadership of our department heads and their teams. Since my appointment as city manager, one of my priorities was to ensure that when I retired, each department would have a strong leadership team that was well prepared to be an asset to my replacement. Our next city manager will inherit a workforce that is highly professional and committed to working hard to achieve the city’s goals.

“Although my contract calls for my departure on June 30, 2016, I recognize the importance of an orderly transition. If the council desires, I would be amenable to offering my services as needed this summer to assist during the transition or to continue in some fashion until you have selected my successor.

“As I mentioned, I did not come to this decision lightly, and it is one of the hardest that I have ever had to make. I appreciate those of you who have taken the time to encourage me to think about my future with the city.

“Finally, I want to acknowledge the support and effort that my staff has demonstrated over the past three years. It has been extraordinary. Our accomplishments as a team are too numerous to list today. I strongly believe that we have built a critical foundation for the city that will ensure that Cambridge remains a vibrant and desirable place to live, work and play well into the future.

“Because of the dedication of the staff and City Council, I have every confidence that Cambridge will be able to address any challenge it may face in the future. My heartfelt thanks to all of you for trusting me with the honor of being city manager.”

Although there are replacement candidates in-house – including assistant city managers and Deputy City Manager Lisa Peterson, previously commissioner of Public Works for a dozen years – few city employees would match his tenure or experience at the time of promotion. As city manager, Richard C. Rossi had a salary of $330,000 annually.

As part of his contract, he was offered use of a city car for unrestricted use, including insurance, maintenance, repairs and gas paid by the city; a cellphone, tablet and “other devices” with “some moderate personal use” permitted in recognition of the city manager’s intense and unpredictable work schedule; and a $120,000 life insurance policy.

In addition, he got 25 vacation days a year, five of which carried over from one contract year to the next; 15 sick days each year that can accumulate with no limits; and a continuation of special benefits he had as deputy city manager “as an inducement to Mr. Rossi to accept employment … and waive certain sick leave benefits.”

“Rossi has accrued substantial accrued unused sick leave from his many yeas of employment,” the council’s contract with him said, and they carried over to his new contract for potential buyback by the city when the contract ends “limited to the cap established by the city for other non-union management employees at the time of such termination.”

He could also carry over 15 unused vacation days from his deputy city manager contract to the new one, with the rest to be bought back if he were to be fired – or, now, as he retires. The vacation, personal, compensatory and administrative leave days earned as city manager can also be bought back, the contract says.

By starting as city manager with these terms and trading for other considerations, Rossi “separately and voluntarily agreed” to let go of days already accrued – then valued at about $615,000.

Like the previous city manager, Rossi will be indemnified forever against legal actions brought against him and the city while he holds office, whether the charges are “groundless or otherwise.”