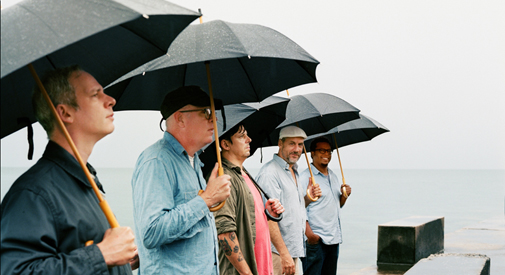 Fans of Ratatat should know that Tortoise was there first – and that the Chicago quintet is in town Tuesday to show how it’s done. The instrumental rocktronica that Ratatat’s done since 2001 has roots in the punky, proggy but largely undefinable music Tortoise has been purveying since 1990, but on their seventh album, the just-released “The Catastrophist,”the band throws in a wrinkle: guest vocalists, including a cover of David Essex’s “Rock On” and a tune called “Yonder Blue” with Georgia Hubley of Yo La Tengo. But where Ratatat will let fly a series of light and slight head-bobbers to an audience grinning a collective “Yeah, man,” Tortoise is going to take a crowd on an edge-of-the-seat journey eliciting a slightly stunned “Heavy, man.” Ratatat is always playing a song; Tortoise turns on lights to a structure never seen, whether it’s a cathedral, a cavern or even a tesseract. (See the song “Tesseract.”)

“The Catastrophist” started with a 2010 commission from Chicago government to compose a suite of live music reflective of the city, and hints of that jazziness remain. But band members say the work changed radically in being turned into the band’s first studio album in nearly seven years. Now, says John McEntire, band drummer and multi-instrumentalist, the long-gestating songs have been fully integrated into an elaborate studio experience.

“Figuring out how to reproduce these songs live will be a bit of a challenge,” McEntire says.

Tortoise plays a show Tuesday at The Sinclair, 52 Church St., Harvard Square, with openers Mind Over Mirrors (another Chicago music project, this one the meditative and mostly solo work of Jaime Fennelly) and local trio E, made up up Thalia Zedek, Jason Sydney Sanford and Gavin McCarthy, that sounds like the soundtrack to the road trip you make when you’ve got especially serious shit to deal with. This is an opener not to be missed, as you’ll see: