Final budget for departing superintendent sees a rise of 5.4% for running city schools 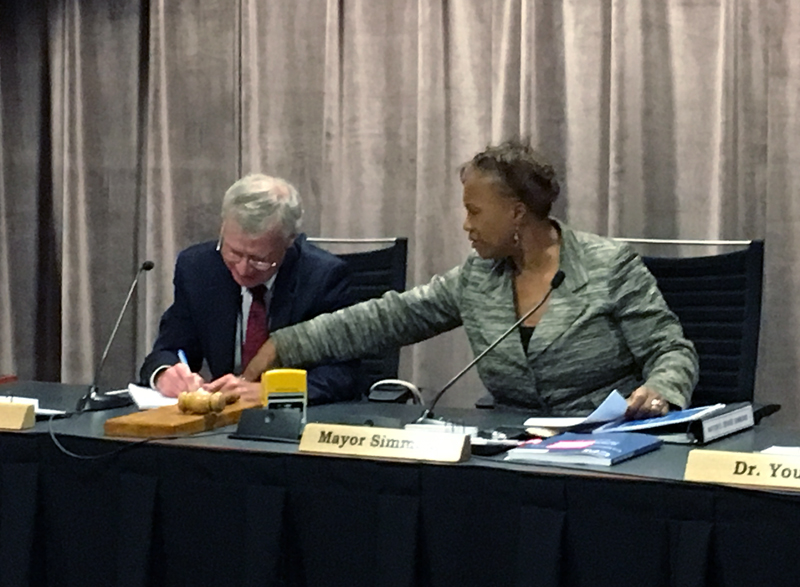 Final budget for departing superintendent sees a rise of 5.4% for running city schools

Superintendent Jeffrey Young presented his last proposed Cambridge budget of his career Tuesday, coming in with a $172.8 million total. Originally projected at $174.7 million, or $5 million more in spending than there was likely to be funding, the proposal is now balanced through increased revenue from the city budget and cuts “not impacting classrooms,” Young said.

The 5.4 percent increase over last year’s budget is the largest percentage increase in Young’s seven-year tenure, he said, “setting a new standard of support in my time here.” The $8.9 million increase was funded partially by increased city funds, added to the base budget to help cover increases in transportation contracts and special education tuitions, as well as by City Manager Richard C. Rossi’s willingness to absorb increased staff health costs, Young said.

The administration found savings by making “reductions and restructuring” in operations and central office curriculum and professional development accounts. Partner organizations, such as Cambridge School Volunteers and the Breakthrough program, were all level-funded, despite earlier administration requests that they prepare for possible 10 percent cuts.

No discussion followed Young’s presentation, with Mayor E. Denise Simmons requesting that the meeting be truncated “due to personal issues of one the committee members.” The committee has two budget “workshops” that will be televised March 17 and March 29. There is a public hearing on the proposed budget March 22 – the only opportunity for public comment – with the committee scheduled to vote on a final budget April 5. A City Council ratification is scheduled for May.

Despite the increase, the proposal is primarily a maintenance budget – providing the current services for next year’s students. A large driver of the higher budget is the continuing increase in enrollment, specifically among early elementary students, and changes in student population resulting in higher levels of students with disabilities.

With the growth of slots available to toddler to 5-year-old students in the Tobin Montessori School, increased junior kindergarten enrollment and growing kindergarten registration, enrollment in the early grades has risen in the past several years. But the upper-school grades have not shown overall increases. Cambridge cohorts continue to have significant drop-off from kindergarten registration through eighth grade, but there’s a notable rebound as students enter the high school, and that increase is growing. This year’s ninth-grade class has 130 more students than last year’s eighth-grade class.

Despite increases in high school enrollment, there have been no increases in staff in the past few budgets, with Young saying at other times that the Cambridge Rindge and Latin School has been able to resolve capacity issues through scheduling rather than through hires. This issue arose in public comment Tuesday with one parent noting the “difficulty in putting together” class schedules in high school, given the CRLS block schedule that limits students to four classes per semester. Young, however, said district research shows that “93 percent of CRLS students got their first choice for every one of the classes,” something he said he would expand on in an upcoming explanation.

Seemingly conscious his tenure in Cambridge was wrapping up – Kenneth Salim, his replacement, begins work this summer – Young had kind words for the “continued support” he has had from the City Manager’s Office, as well as for the staff in central administration and every adult in the schools. “There is no community like Cambridge,” he enthused, calling out not just his staff, students and families, but “partners” in the city such as volunteer organizations and institutions such as the Massachusetts Institute of Technology and Harvard. He noted particularly the work and support of his chief financial officer, Claire Spinner, in pulling together the budget every year.

Nearly 20 volunteer tutors who work at the high school tutoring center appealed to the committee to intervene in the leadership of the tutoring center. Saying they heard “rumors” that the center’s manager, Rene Meshon, may be replaced by a representative of the independent nonprofit Cambridge School Volunteers, which provides tutors to the center, the speakers sang Meshon’s praises. Joined by two tutees, several of the volunteers – many of them retired educators – said that whenever Meshon is ready to retire, they felt it was critical that Cambridge continue the model of having the center run by a former CRLS teacher, who knows not only the staff and curriculum intimately, but someone who “understands high school students.” “It is amazing to see her work with teenagers,” said one volunteer who has tutored elsewhere and attributes the strength of the high school’s program to Meshon.

Committee vice chairman Fred Fantini thanked the volunteers for coming and said the committee would likely bring in a motion to refer the matter to the superintendent and Principal Damon Smith, asking them “to take a second look.” The CSV organization’s executive director, Jennifer Fries, referred media inquiries to Smith, writing that because Meshon’s work as tutoring center manager is an in-kind donation to CSV’s budget, she “is hired by CRLS, not CSV.” Smith has not returned a request for comment.

The committee referred to the superintendent and Smith a motion by committee members Patty Nolan and Kathleen Kelly to review the health curriculum for high school students. This motion was prompted by a letter from Smith to the families of rising sophomores that a Wellness 2 course “should be mandatory for all 10th-grade students.”

The letter was sent during the week students were signing up for next year’s courses and threw many students’ plans into turmoil. The current policy is that 10th-graders may use athletics to be exempted from Wellness 2, which combines physical education with “health education units.” But Smith wrote that “given data in the 2013-14 Teen Health Survey results, as well as the social, emotional, nutritional and physical issues confronting CRLS students,” he proposed a last-minute change requiring all 10th-graders to take the class. The two-year-old survey data is similar to results of the previous survey.

Two days later, Smith sent another letter saying that “having fielded call, emails and questions,” he had decided that his proposal was “untimely” and that “there will be no requirement for all students in the Class of 2019 to enroll in Wellness 2 their 10th-grade year.”

In public comment, Sharon Bober, parent of a ninth-grader and also a clinical psychologist and researcher, said she was “glad the school is worried about this,” but stressed the need to use an “evidence-based approach to what we do. How we intervene and when” is critical, she said, suggesting research shows that a program starting in elementary school is the most “robust” approach.

A motion by Fantini to grant a temporary exemption to the Friends of CRLS regarding fundraising policy drew support from the organization’s executive director, Elaine Schear, and clarification from the school’s chief operating officer, Jim Maloney. Committee policy, Maloney said, prohibits fundraising partnerships that “encourage and publicize a commercial enterprise.”

FOCRLS’ recent plan to have one shopping day at Whole Foods Market when a percentage of sales would go to the organization cannot be advertised on the high school website, Maloney said, because it violates the policy. While the arrangement provides funds for the organization, the program also urges families to shop at a particular store – usually on Wednesday, the weakest sales for grocery stores, Maloney has pointed out previously, and that could be seen primarily as a way for the store to increase sales. The committee approved Fantini’s proposal to grant the group the same exception granted to Friends of Cambridge Athletics under the same circumstances, allowing a grace period for the rest of this school year while referring the issue to a subcommittee for an overall fundraising policy review.

Passed unanimously without comment were a first reading of admissions policy revisions for the Rindge School of Technical Arts Program; $56,000 for out-of-district tuitions; $55,000 for wireless computer equipment; about $2,800 plus in-kind donations in miscellaneous gifts; acceptance of $1.2 million in Title 1 funds; $5,500 in literacy grants from the state; and approval of a contract with the clerical unit of the Cambridge Education Association union. Committee member Patty Nolan calendared until a future meeting a motion for a $27,000 contract for home-based behavioral support services, saying she was still waiting for detailed information on Title 1 expenditures from the administration.